Harvestman said:
Quite right, but not edible.
Click to expand...

To the Herb Robert.

Harvestman said:
To the Herb Robert.
Click to expand...

I was under the impression it was edible, even though I don't like it much.

I was told it was poisonous, but I've never tried it, so I could be wrong. I'd better defer to someone with more experience than me.

On thew sliding scale I never put herb robert on posionous , it dont go on edible eiter, it goes on rub on forehead and the midge are a bit put off by smell.

I've published a summary of the first season of my Wild Food and Natural Resources Course (which is also available on Facebook).

I think it complements this thread well.

I'm with Fi on the Herb robert, definitely not edible (yuck) but not poisonous either, in fact, when I was researching it a couple of years ago I found it was quite the opposite! http://www.herbsarespecial.com.au/free-herb-information/herb-robert.html Pretty amazing stuff eh?

I'm with Fi on the Herb Robert, Not edible (yuck!) but not poisonous either... in fact when I was researching it a couple of years ago, I found it was completely the opposite! http://www.herbsarespecial.com.au/free-herb-information/herb-robert.html Pretty amazing stuff eh?

Bit of an update... Visited a friend over the weekend, taking a stroll/forage at his local coastal reserve.

Elderflower and dog rose. Sambucus nigra/Rosa canina respectively.
Both the flowers/berry's of elder, and the 'hips' from dog rose have multiple uses,
mostly revolving around drinks/cordial/deserts ect. Burdock- Arctium lapp. Everyone knows its distinct flavor from the drink,
but the root system is very popular in Asian cooking.
The leaves can also be used to wrap/cook food over a bed of coals. Set a prawn trap overnight in a new area. I think the mesh size is a little too large,
or the several dozen mixed crabs I captured had prawn for tea
All crabs are edible, brown (minimum size in law) shore crab, velvet (ninja) and spider.
Pictured a small brown (in trap) and a common shore crab (in puddle looking angry).
Brown- Cancer pagurus. Shore- Carcinus maenas. Always collect the largest you can find for both meat and morals. Common Limpet- Patella vulgata. Everyone should know these from childhood if you played on a shoreline.
Very, very chewy... But make a great fish stock. I'll be doing some seaweed pictures in the next few weeks, battery/s died half way through forage
Last edited: Jun 25, 2012

Chicken of the Woods (Laetiporus various) 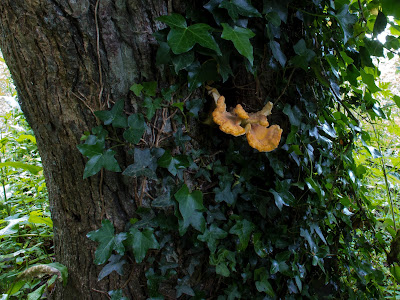 I've been told not to take them from Yew.

Here's another jolly game of "spot the food". 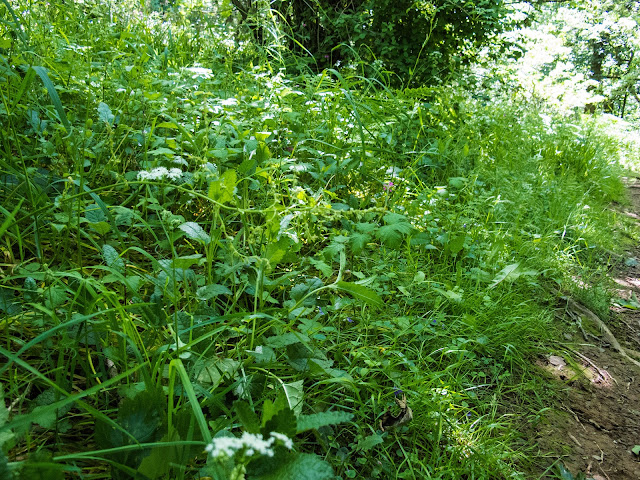 Link to a big version here. There is a handy magnifying glass on the page.

The habitat is woodland pathway and the time of year is early June.
Last edited: Jun 20, 2012

I'll update this early next week... Been away but found some horse mushrooms, larch bolete, hopefully puffballs and off to 'forage' some sea bass in the morning!

The Big Lebowski said:
off to 'forage' some sea bass in the morning!
Click to expand...

Fingers crossed and all.

Right... Update at last! Although a slightly fishy one

Sea bass- Dicentrarchus labrax. Just a smudge over the MLS. I prefer them larger (3-4lb) but this one would not return despite our best efforts.
Another 23 where released to fight another day. It was sent off to the great pond in the sky with some wild fennel and samphire. Crayfish (signal)- Pacifastacus leniusculus. You need consent of the landowner and also a license (I have both) to trap them, but its worth the effort
and paperwork if you do get access to a pond/lake. The natives are long gone from this whole area sadly. This lot was destined for the BBQ Nom, nom. Rock samphire- Crithmum maritimum. A new discovery yesterday as its not native locally.
Smells wonderful crushed (like lemongrass) but reviews are mixed. I might stuff some fish with and see what happens. I'll be back out soon and have also been taking pictures of some previous stuff in flower to help with general ID.
Things are much easier to spot when you get an idea of what the flower color/shape are as a pointer.

I'm with Steve on this one. Can't decide if it most reminds me of liquourice, aniseed or coal-tar soap.

Mmmm.... you guys are going for the hard sell I'll have to try some now, just out of curiosity!

I'll update this soon, been absolutely lashing down here for two solid weeks. Found wood mushrooms yesterday and a few other bits.

The Big Lebowski said:
Mmmm.... you guys are going for the hard sell I'll have to try some now, just out of curiosity!

I'll update this soon, been absolutely lashing down here for two solid weeks. Found wood mushrooms yesterday and a few other bits.
Click to expand...

The bloomin rain. I know wales is famous for its liquid sunshine, but I when out today to gather wild strawbs. Most of them have turned to mush on the bush. I am wiating for the pines to come into flower with pollen, but they need a dryness.
You must log in or register to reply here.
Share:
Facebook Twitter Reddit Pinterest Tumblr WhatsApp Email Link
Top Bottom