When it comes to axes bushcrafters tend to be a picky bunch, understandably, after all, we do use them for some very cool, but demanding stuff. So, when the opportunity came along to review a Wetterling axe we thought we ought to see how they performed. We chose the large hunting axe as this is closest to the size generally preferred for bushcraft use, at 50 cm (19 ¾”) and a weight of .7kg (1 ½ lb) This would also enable us to set a benchmark when compared to the Gransfors Bruks Small Forest axe. 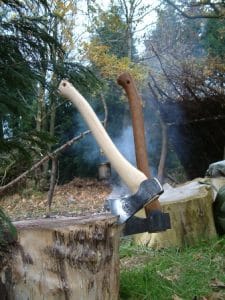 Straight out of the packaging the axe looked good, although on closer inspection it was evident that the forged head was a bit rougher than expected. Not that this would affect the cutting ability of the axe, so much as being just cosmetic. What is not cosmetic though is the fact that the axe needed a good sharpen before it could be used, this was very disappointing, especially when compared to the edge on a GB axe when it leaves factory. The head of the axe was also out of alignment which was another unexpected surprise. The only way to rectify this would be to replace the handle which would be quite time consuming. The head alignment does not make a vast difference on an axe this size but could be quite dangerous on some of the big axes, as the edge would bite at a slight angle, cutting less efficiently and causing more fatigue to the wielder.

In use the axe is nice, just the right weight and an edge profile a bit thicker than the GB small forest axe which made for better splitting ability. For fine like feather sticks and spoons the thicker profile meant that the axe was slightly more cumbersome and took some getting used to, but after a time I got used to it and it worked well enough.

In heavy use such as splitting and limbing the axe shaft was quite slippery and became hard to hold, this is due to the finish on the shaft. My advice would be to sand this off and just oil it. The shaft is also a little thicker than the GB small forest axe, this feels a little weird if you are used to the smaller shaft size but it is something that you soon get used to. The axe also has polished poll so that they can be used as a hammer or to skin animals. In the UK we do not have many animals that would warrant this but using the axe for hammering is everyday use. I don’t think it being polished makes much difference to its hammering ability but it’s good that they have considered this use. The axe is also well balanced which is a benefit when being used for fine work and when in heavy use as it helps keep fatigue to a minimum.

I would say that for most uses the large hunting axe performs very well under our demanding conditions. It can take a razor edge, which was expected as the steel is the same as the GB axes, and the profile is not hugely different from the GB. It is small enough to carry in a pack, or on the outside of it without the handle protruding and getting caught on bushes and undergrowth.

The sheath on the large hunting axe is good quality with the nice touch of a belt loop for ease of carrying. I’m not sure how this would perform over an extended period but it was quite comfortable to use during the review. It does let the axe hang straight down, which for some might not be ideal as it can get in the way. But in most cases this will not be an issue and with a little bit of leather work could soon be adjusted.

At £10 – 20 less than the Gransfors Bruks Small Forest axe, the Wetterlings large hunting axe it is well worth the money. It has to be said though that Gransfors Bruks have the edge when it comes to quality of finish. It’s a shame really as it would not take much for Wetterlings to have a product that could compete on even ground with the small forest axe.

Overall the Wetterlings Large hunting axe gets 7/10 which is good, but it does have the potential to be better
Copyright ©2003-2016 BushcraftUK.com