Traditional food in Northumbria by Brears

Just ordered on of these to be delivered on Monday

Normally its well over 20 quid plus postage , It says last one but he has several. Seperate sales listed at the same time so a search on the title will find the others.

I've got his similar books on Yorkshire and Shropshire and I learned a lot about open fire cooking and equipment from them.

On this note though; have you made Clap Bread ?

It sounds an awful lot like a north British version of the Indian and South American flat breads, just made from oatflour.

Hi Mary
Not sure if I've made clap bread, there tends to be so many dialect names for such things I could know it as something else!

I'll look it up once I've caught up on the housework!

Tom
Ps picked up a neat little Penrith kitchen bowl for 99p yesterday., I say kitchen as it's the right size for ingredients, if someone offered you snap in it you 'd feel short changed! It was while loo,ing for a book on Cohntry Pottety I stumbled on the cheap Northunbrian book. We have a cheap second hand copy of a book Brears did on collecting the stuff back in the 70s coming. There are some really nice ones on the subject out but tend to be the +40 quid sort!
Last edited: Sep 30, 2021

Looked it up , and no I've not done clap bread., just done oatcakes, the soft yeasty sort. I lived near Stoke for 4 years so got to love them, the Derbyshire sort are the same as the Staffs just thicker, despite being from there I never had any until I made my own.

I'll have a go when I next have a open fire. The girdle works nicely on a trivet but when the front rooms finally finished I'm having a free standing crane in the fire place.

The book arrived on Saturday AM so excellent service there, herself got to it first and is reading it before me. From a quick skim through it does look as good as his other stuff.

Yesterday I ran a pound or so of flaked oats through the blender until it was a very fine flour, took a while as even when fed it through in small amounts the blades rapidly formed a cavity and you had to keep shaking it. No worries as I was inbetween times helping the Mem' make 11lb of apple and stawberry jam and 2.5 lb of extra vinergry mango chutney.

Anyroad I found a recipe for clap bread on the net and doubled it to in the end 7 near plate sized pieces.

Mix and prepare as many baking trays as your oven can take by lining them with baking paper. I started preheatingthe oven to 180C or 170 if you remember it's a fan oven...

I melted some beef dripping in a small bowl floating in a larger bowl of boiling water and added two tablespoons to the mix along with enough boiling water to make a pliable dough. Then i gave it a good need and broke off a piece about as big as a golf ball and pounded it into a tight ball then i used my hands and a bit of flour to make a disc. When it started to be difficult to handle I put it onto a cutting board and battered it into a rough disc that was a about a mill thick. The descriptions I've read refer to it being paper thick. I kept turning it over and at times resorted to a rolling pin and a small amount of flour to stop it sticking. As I transferred the piece to the baking tray i brushed off the loose flour with a brush , the sort you use for glazing the tops of pies, i never remeber what the proper name is.

Once I had three done I slapped them into the oven for 25 minutes. After 15 I moved the trays around and at 20 flipped the breads over, the bottoms were slightly more done than the tops. I repeated the baking until all 7 were done and on cooling racks. There was a pleasant nutty smell. 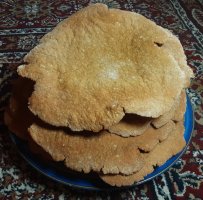 I had two for tea with butter, Cheshire chease ( one of the lads wasted the nice Lancashire crumbly on top of some Mexican rolled up things ) and pickle. Very crisp and with a pleasent nutty flavour. Would I have them over Staffs or Darbysh' oatcakes if I had to choose? , well, No, but I grew up with soft oatcakes but as a occasional thing yes I'd definitely have them again. They are much easier and quicker to make than soft oatcakes and could be easily made in the field dry fried on a flat rock, thick frying pan or best of all a iron girdle/ bakestone.

This is a about as fay as I get but as I sat here with the TV etc off, no traffic passing and the only noises people talking, birds and a donkey braying the field out back, chomping on something that would have been the main source of carbs to the weavers who worked here back in the late 18th C I felt a connection, or possibly indigestion. Your choice.

Excellent
Great to see, and better yet to hear that they're worth the effort

My recipe (receipt) says that they were formerly 'clapped out' by hand, thus the name, but latterly they used a slightly dished wooden plate and rolled it on that with a shaped pin. Then they were cooked on the girdle.

I ground up the oatflour a couple of days ago, but I'm up to my eyeballs in apples, raspberries (Autumn fruiters are still giving 200 - 300g a day) and pears, and just haven't got around to it yet.

My quince bushes are dripping with fruit just now too.
If you fancy quince, let me know and I'll box some up and post. I'll never use this lot. The scent from them is glorious and I do like the cotingnac/membrillo

Herself just scoffed one with Philly on top, after a Chinese cooked for her by the youngest, mind, and loves them. Then she is adicted to Nairns oatcakes so it's not surprising. Ihad one crumbled up in the soup I had, very nice!

I'll have to find some pics of the boards and rollers you mention and make at least one, slapping the things flat and rolling was the only fiddly/slow bit of making them.

Herself would be one happy bunny for any quinces you can spare, she's happy to cover the postage. Cheers!

I think that they sound just like the ones Indian ladies use to make chapattis. The chakla belan set.
It sounds very practical anyway.
I fancy one of those sets for making tattie scones. That said though, a lump of dough laid between the layers of a cut open poly bag, and pressed flat using a pyrex lid, works really well.