Jon, do the straps at the top hold the chimney in place alright and does that enormous aluminium seperater fit through the straps?
Havn't had a chance to get mine up yet although iv'e been camping in the lavvu several times.
thanks so much for doing this gb Jon.
Send a pm for clarification on delivery .
:You_Rock_

Got the stove yesterday and fired it up last night to burn off the new smell.

Today I had a lot to do in the garden and thought I would try the stove with my Tentipi. I have 6" nails drilled into my patio in just the right places for my Tentipi so I can set it up to dry and also for the girls to use as a summer house. Now with the stove it can be a winter house too. 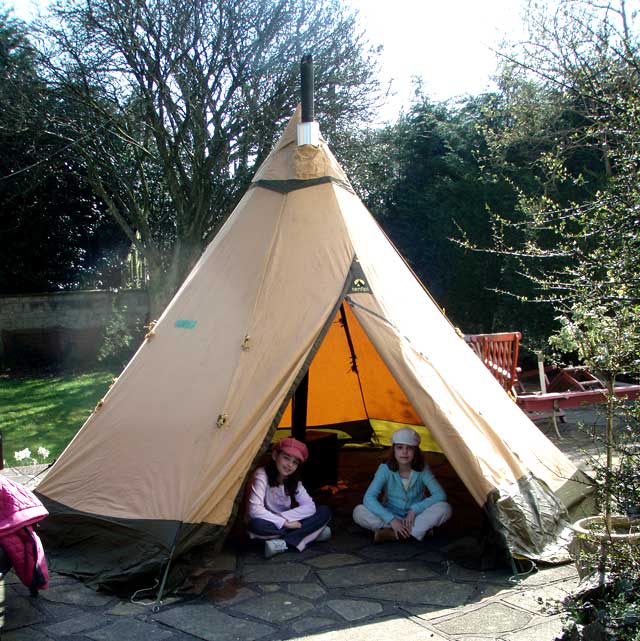 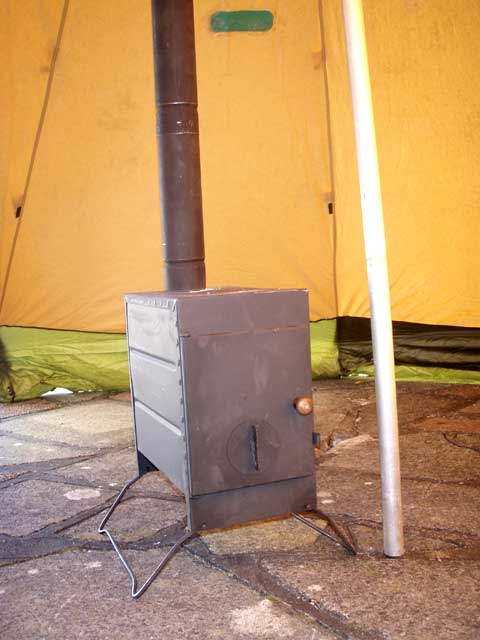 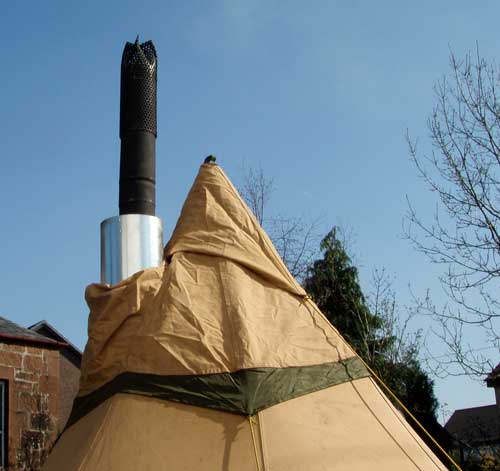 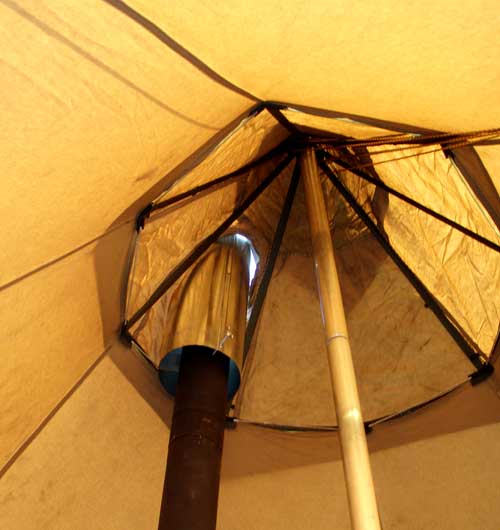 It was well toasty with the stove but it was a warm day anyway and I had all the vents and door open. The heat mask thing works well and the tent does not get any heat damage at all.

Thanks Jon ofr organsing this and to Mr_Rimps for collecting my lavvu and stove for me. :You_Rock_

Ended up going down to Dartmoor this week with the missus and took hte tipi and stove with us.

Other than being sold some dreadful "seasoned" (read part seasoned, still green in the middle and some that were so damp had mould growing on them ) logs that wouldn't burn so ended up mainly using kindling in the stove. We were really impressed by the stove and tipi though. We even had a couple of people who were doing their DofE come over and ask about it. The farm's dog liked it in there too

Anyway heres a couple of pics:

A bit of advice please...have a lavvu 8.+ stove Should I 'break' the poles to bring down the apex so that I can then put in the flue/chimney, and add sections as I then re-raise the pole?
Cheers, Jon, a good effort!

paulcd said:
A bit of advice please...have a lavvu 8.+ stove Should I 'break' the poles to bring down the apex so that I can then put in the flue/chimney, and add sections as I then re-raise the pole?
Cheers, Jon, a good effort!
Click to expand...

I set up my luvva (all pegged out) and then installed the stove. Put the chimney together poke it through the top (making sure the heat guard is touching the luvva and not the chimney) and then attach to the stove. You might have to move the stove to ensure the chimney is straight and take care with the spark guard the edges are sharp.

Thanks Mr Rimps
We did have a go of something similar yesterday...great to see it in all its glory, but the weather is so nice, I have yet to 'pump up the volume'

what size tundra do you have?

edit: [I've been a bit of a doughnut again - this is an old, old thread. Sorry. I really should read the date on these things - I still would like to understand how different they are in quality compared to the price]

Wow. This seems a huge price difference from the Tentipi. As a Tentipi owner I wonder how they can justify the premium - not having compared like-with-like. The same tipi + floor + stove would set you back three times as much for a Tentipi. I must admit I am tempted to buy even though I have no need for one!

Even though. It seems great value. Has anyone done a head-to-head comparison?

what size tundra do you have?
Click to expand...

thanks for the info. Sorry to have resurrected an old post!!

I'm gonna ressurect this one, as I'm interested in moving up tipi size wise. Currently, I'm in a Hex 3 when I tent camp. In comparison to these beasts, it looks like a kids play tent and leaves me feeling a bit inferior!

Was there ever gonna be a chance of another GB on these, it's been quite a while since this one ran and more people have joined the forums since. Is it feasible or is there a place where Bison tents are now available in the UK?

There are now two uk importers who are:

http://www.pointbarwilderness.co.uk/index.htm - though web site says its closed and:

I bought direct from Vidar at Bison and all went smoothly

My tipi fund stands at 250 notes, another trip to the scrap yard with some more scrap from the van this week will hopefully boost that up. I'm gonna fund this straight from that source and maybe some kit sales, so keep your eyes peeled! Apart from that, I supose I better decide on a 4 or 8 and where to purchase from!

Too big! I've decided on the Bison Tundra 4, I'm five quid off getting the tent, need to save for the stove now! Another 70 notes went into the fund today, lead, copper and brass prices are doing quite well at the moment!

Gonna hang on to it for "lightweight" back packing, an oxy moron in itself when you consider the amount of kit I take!
You must log in or register to reply here.