Let's be honest, those that love our sharps rarely get to use them as originally thought when we laboured over the justified purchase, often to have the new toy reside in the deep dark depths of a draw or knife box.

So most of the time the only way you can enjoy your knives on a more regular basis is in the kitchen.....and I know I am not the only one

So from my experience with my lovely wife, if something comes into the house, it has to replace an existing item.

I was up for the challenge, enter the contenders for sour dough bread cutting challenge: 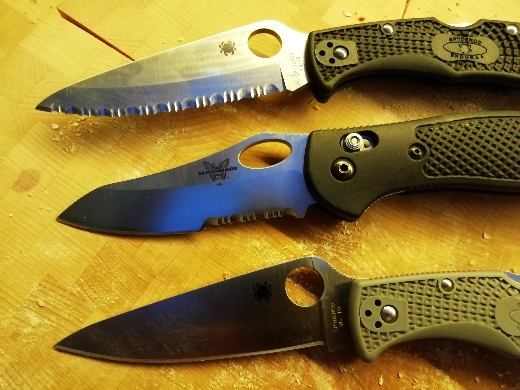 My control was the was the 'world's sharpest knife' made from surgical stainless steel, guessing a 400 series steel? This a cheap common knife that every at one point has owned or seen, often bought by non knife people, and often gifted to individuals whom strive towards the newest latest super steels....so not used. 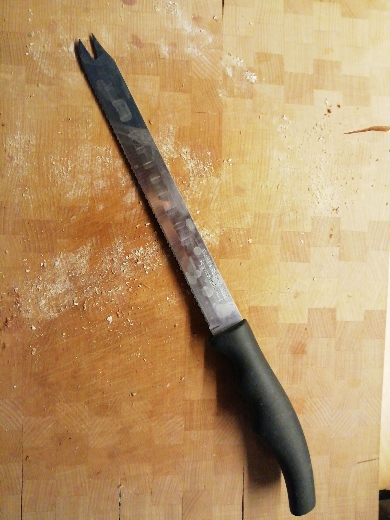 Anyway, the test was to cut straight 10mm even slices, repeated 3 times and timed, scores were rated 1 - 5, for speed, eveness of cut and pressure required to do the cut, to keep it even starter cuts were done with the middle section of the blade and a sawing motion, rather than stabbing it. A maximum score of 45 to be attained....i was not bored....honestly, I just really like the sour dough bread I make.

Now this may seen like an easy test, but my sour dough bread is tough and not good for false teeth, but tastes heavenly.

Right away the blade length was a limiting factor, but all folders had a similar length of under 10cm, the 'worlds sharpest knife' had the advantage of length and shallow serrations, but difficult to start the cuts and finish the other end...so a complete failure compared to the others.

The Spyderco spyder edge was a great cut starter, but difficult to control and slicing action ripped at the softer middle, my knife was a sabre spyder edge, so quite thick, this may have impact compared to a flat ground spyder edge?

The plain edge spyderco took more pressure to do the start cuts, but flew through each cut to the finish and maintained an even cut, very impressive for a flat grind, which my experience sticks in normal kitchen use with preparation of other food.

The benchmade started the cut just slightly behind the spyder edge, sliced the middle well and finished similar to the plain edge, very very impressive. 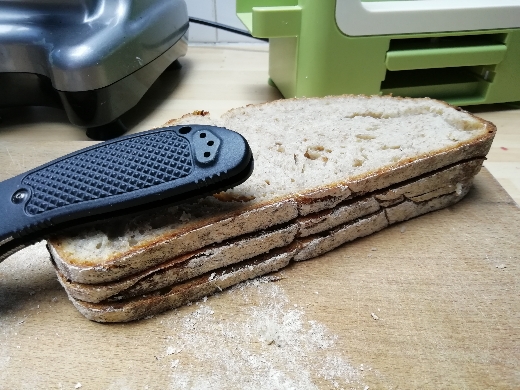 Worlds sharpest knife - 26, the blade was to flexable and took the longest to start and finish each cut. The only plus was the length of the blade, and the eveness of cut, but still not that even given the blade length as it kept trying to walk off the cut line.

Spyderco spyder edge - 36, cut was a little uneven and ripped the middle the bread, not great at slicing, but fast and little pressure was needed.

Benchmade combi edge - 41, just slightly ahead on the start cuts and lower pressure needed to preform the job.

I normally hate the look of combi edges, but I have at last found my perpose for owning one, this knife has won the competition and kicked out the 'worlds sharpest knife' out of the draw

To be honest any of the folders would be a good choice, and a little disappointed in the full spyder edge, but I will find a use for it one day.

I hope you liked my kitchen folder review, the plan is to justify more shinies moving into the kitchen soon... 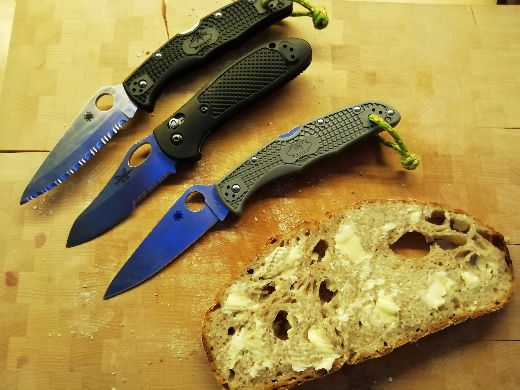 As a test that is clearly practical but why to use a folder as a kitchen knife in the first place? The pic does not show it but I hate chisel ground kitchen knives in general, cutting tomatoes is just about the only good use for them. I do recognize that asymmetric serration is a lot easier to sharpen but still.

TLM said:
As a test that is clearly practical but why to use a folder as a kitchen knife in the first place? The pic does not show it but I hate chisel ground kitchen knives in general, cutting tomatoes is just about the only good use for them. I do recognize that asymmetric serration is a lot easier to sharpen but still.
Click to expand...

Folder in the kitchen is practical in relation to draw space for me, plus the steel is better, I have it to hand and an excuse to bring my knives up into the house...plus fun.

My serrated blades are not chisel ground, even sabre either side, and then a secondary bevel grind, with a mirco bevel on the opposite side. I understand what you mean, true chisel grinds cut off to one side when in general use.
You must log in or register to reply here.

A really weird tip for sharpening scissors that worked for me

DIY and Traditional crafts May 7, 2021
Buckshot

B
Review of Worksharp field sharpener