Herman30 said:
But they don ´t need in their daily life.
Click to expand...

Yup, I agree that that is the main difference. In some ways the life if Northern Finland in the 30's did not differ all that much from that of a hundred years earlier. Quite primitive in some ways.
Reactions: Herman30 and Erbswurst
E

In the twenties of the last century Germans went to Lapland to learn about bushcraft, and imported equipment ideas from there.
The German Wandervogel and Boy Scout moovement uses Same equipment until nowadays, especially kottas (portable in 4 cotton tent sheets) and Scandi grind knives. But also the use of sheep hide instead of insulation mats was surely inspired by Same. And I think we got the sleeping bag also from Scandinavia.

Until now a German Boy Scout who didn't travel in Scandinavia is commonly seen as a beginner.
T

Erbswurst said:
And I think we got the sleeping bag also from Scandinavia.
Click to expand...

I don't know who originated the bag, might well be that they got from somewhere around Fennoscandia. The arctic and Antarctic explorers had bags from the start, at least the Norwegians did. Would be interesting to know where the bag idea started.

I think we got the Scout Movement partly from Britain and partly from Germany so the visits early on are quite likely. Imperial Germany did have a part in Finnish independence a bit earlier, Rüdiger von der Goltz and the Baltic Division etc....
Last edited: Nov 21, 2020
Reactions: Erbswurst

Concealed bladed article would be bad news if you got caught with it but how would that happen? I guess if you wore it in your belt all the time you'd meet a metal detector eventually. As a basic premise though, to wear it in a belt for any length of time would presumably cause stress fractures in the blade. I'm not thinking it's a winner.
Reactions: Erbswurst

I have tried to do something similar to Greg. I put my blade in two pieces of Velcro, and then used put bicycle inner tube ranger bands on the belt to hold it in place. Thus it gave me a saw blade, a cover and some spare inner tube for tasks including a method of attaching it to wood. I kept a couple of nails or bolts under the bands or in a pocket or pouch. A full size saw blade is also a lot better that the old commando wire saw in a practical use for processing a large amount of wood.

I did it as part of a test to see if I could carry a total survival kit in my clothes (before everyone shouts out) I did it as part of a survival course, being as light as possible but as complete as possible as well. We were allowed items that could only be in our clothes and no pouches allowed. The method of water was the hardest for most people. We still were working with 2 oz survival tins at that point, my methods have changed since going on more tours and the introduction of other SERE related stuff. I have the Wazoo cache belt and some other belt which I have other SERE stuff in them.

I may recreate it and post a few pictures of what I would now put together for the kit. some things would definitely change and i think would be a lot lighter now as well.
Reactions: Greg, Erbswurst and Broch
D

I honestly don't see the issue with this idea, use a bit of bandsaw blade and as long as it's not so long that it goes through the buckle its easy flexible enough to go round a person.

I have a Ulmia joinery framesaw and the blade is 700mm long, having a 700mm (about 30") waist is a distant memory.
I doubt that anyone would even notice the extra weight in a belt.

Do it, tell us how you get on and even if you don't like if you'll know why not.
Reactions: Herman30 and Erbswurst

Paul Kirtley uses a length of hook and loop to store his saw blades in , potentiall you could secure some to the inside of your belt ….. Bringing together a general purpose axe and a solid saw, with modifications and additions for each, equals more than the sum of the parts...

Its a nice video in total but the bit i'm reffering to is just before the 15 minute mark …….
Reactions: Erbswurst
H

Among the best things I have bought this one is among top 5.
A pouch to carry axe and saw on the back. Bought from UK.
I carry a Gränsfors small forest axe and Silky Big Boy. 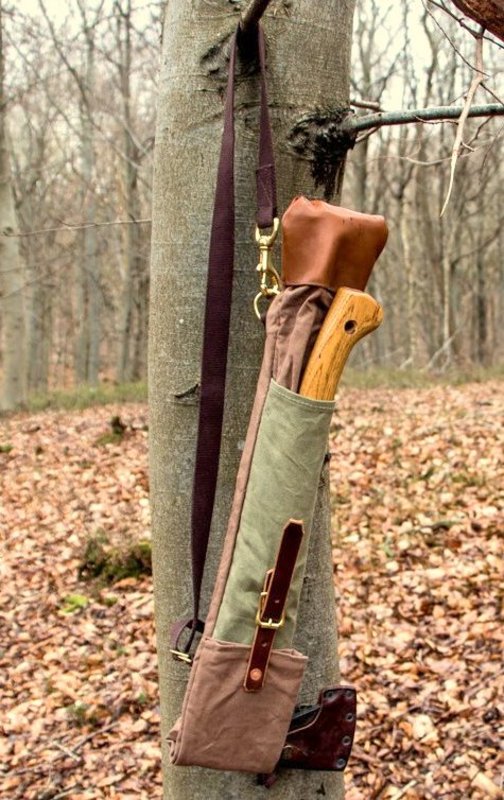 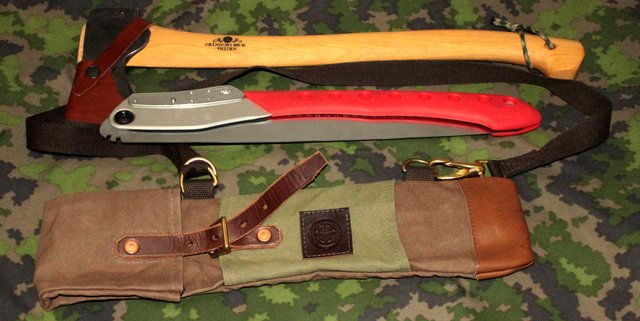 Oh I missed this video somehow.
Thank You!

The velcro sheets could be perhaps sewn together on the teeth side and like this it would become more secure.

I have seen police and army belts with velcro connected inner and outer belt. I think that's invented to hold pouches in place but probably could be used also for a saw blade?

Should that work, we would have found a ready to use plug and play solution that can be bought in a shop, instead of a sewing project.

Perhaps the stuff already exists and I just need to put it together?

The velcro sheets could be perhaps sewn together on the teeth side and like this it would become more secure.

I have seen police and army belts with velcro connected inner and outer belt. I think that's invented to hold pouches in place but probably could be used also for a saw blade?

Should that work, we would have found a ready to use plug and play solution that can be bought in a shop, instead of a sewing project.

Perhaps the stuff already exists and I just need to put it together?
Click to expand...

The army belts, is now used to form what is known as a battle belt, the police call it a duty belt. The inner belt is used to keep your trousers up and is generally the soft velcro side the more ridge side (hook) is the duty or battle side to hold your pouches and equipment. so you can easy detach your pouches as necessary or if you are sitting done but put it quickly on if needed.

The Wazoo set up is a piece of webbing material folded in half with a thin velcro strip on the top to hold the contents in. I have not looked at putting a saw blade in mine yet as I have a lot of other kit in there already. Once I get to trying it out and taking the pictures I hope you will see it easier. (just waiting for a break from work, so I have time to do it justice).
Reactions: Erbswurst and Broch
W

On police duty belts the inner belt/outer belt system also keeps the belts together, although most forces issue belt keepers to keep it all neat.
Reactions: Erbswurst
B

Wazoo survival cache belts have room for stuff in them, I'd imagine you can stick a saw blade in there. A guy on BCUSA stuck a 24" bowsaw blade in a belt.

Reactions: Greg and Erbswurst
You must log in or register to reply here.