I dont write many trip reports, dont think ive done any here actually, but was responding to another thread and figured i may as well put up a quick one of my own instead of in there. No bushcraft involved on this one.This was June last year

In a trip of several firsts, which is always a good idea of course, i decided to

What could go wrong?
Nothing as it turns out, other than finding out paddling a canoe is really not as a simple as it looks, especially going across a choppy loch, and with a dog who cant sit still.

My plan was a 3 day trip going from Loch Bradan -> Riecawr -> Slochy -> Macaterick -> Eglin Lane -> Loch Doon -> Loch Finlas ->Derclach Loch -> Bradan.
It had been a dry spell before the trip, which i think made some of streams a bit lower than they would usually be, which became a problem.

First of all i dropped my canoe and gear off at a bridge over a stream leading into Loch Riecawr, drove back to Loch Bradan to park and then me and the dog walked back to the canoe. 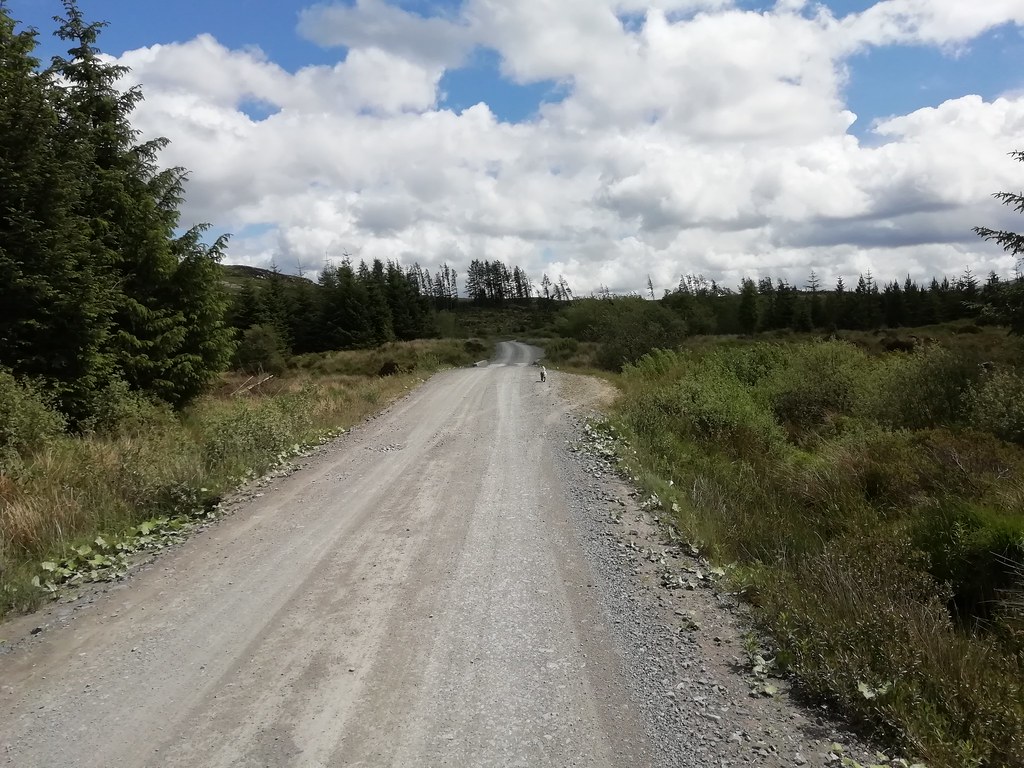 First challenge was to get the dog into the canoe, which actually proved quite easy. Two biscuits and the threat of being left behind and we were away. The bigger task was getting her to stay in it, constantly jumping out to explore the bankings or swim over to see a leaf or rock. She got my moneys worth out of the handle on her PFD. 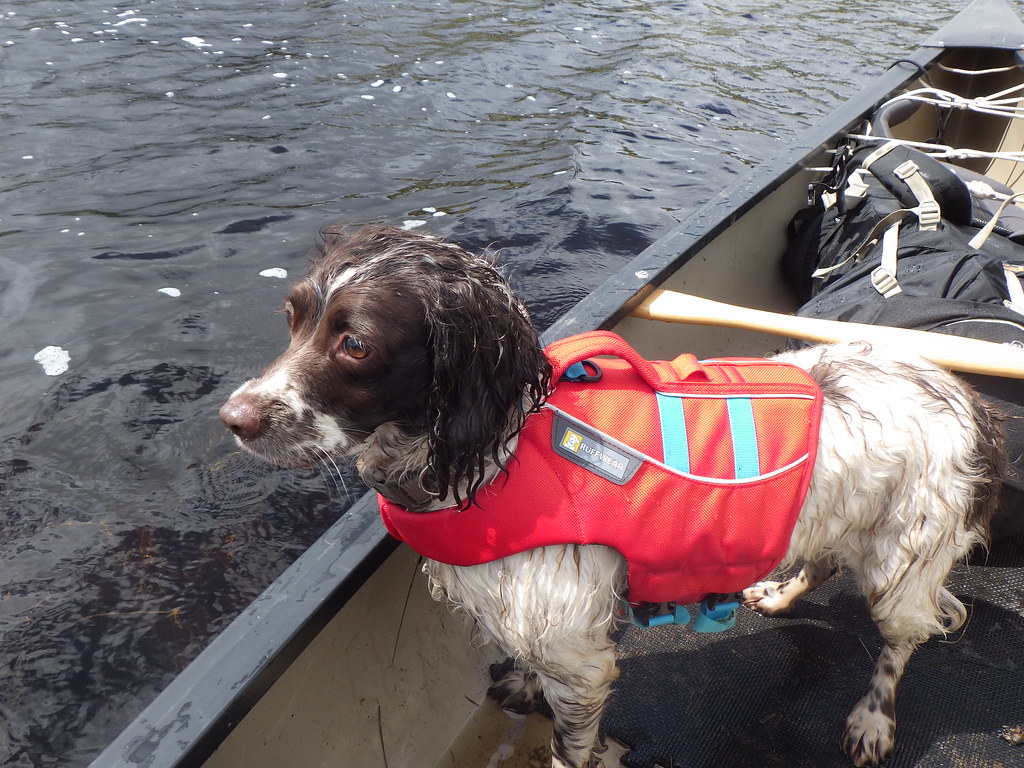 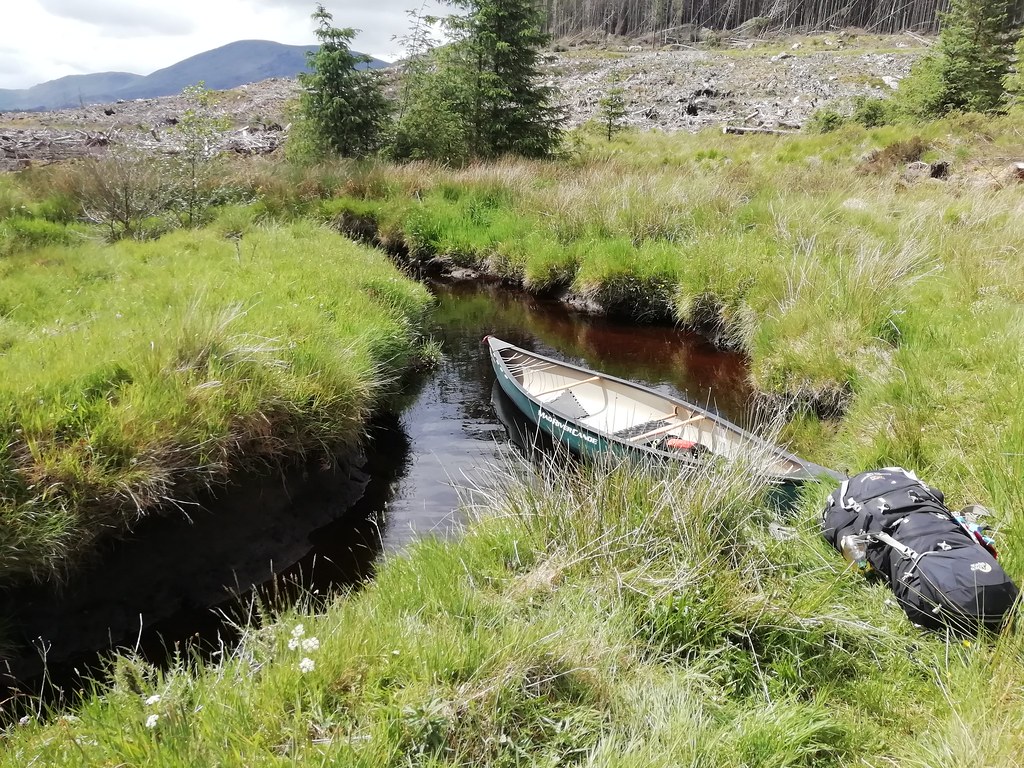 I got a tiny bit of paddling down the stream towards Reicawr before having to get out and drag the canoe alongside it, as it became too rocky and narrow to paddle. This was to be a recurring theme.

Eventually it widened enough to paddle out into Reicawr, and quickly across to the boat sheds to take shelter out of the wind which had picked up a bit. I was having real problems trying to paddle against the wind, and my dog, Riley, kept jumping about which wasnt helping. No pictures of this bit.

Due to my inexperience paddling a canoe, i was a bit wary, so i hugged the shore till i got round to the stream coming down from Loch Slochy. I only got a little bit upstream here before it became too rocky to continue. So out with the canoe again, and back to dragging it alongside the water towards Loch Slochy. It was too heavy to do the canoe and my gear, so i ended up doing relay trips to get them further on. 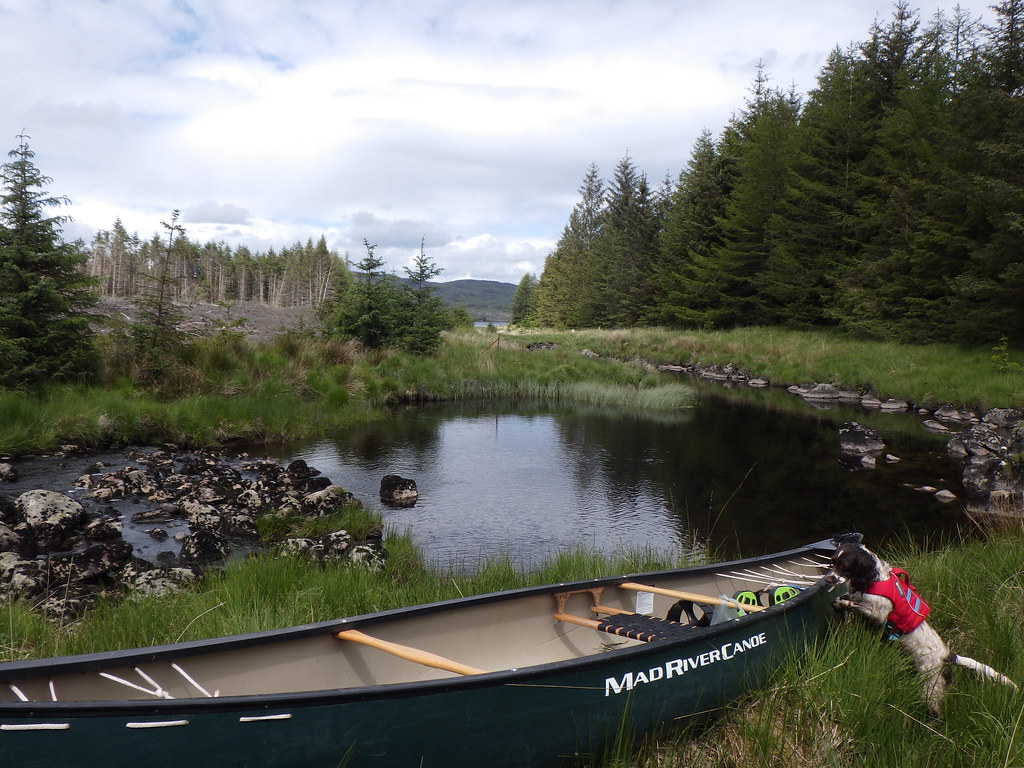 RIMG0038 Take out point after Riecawr 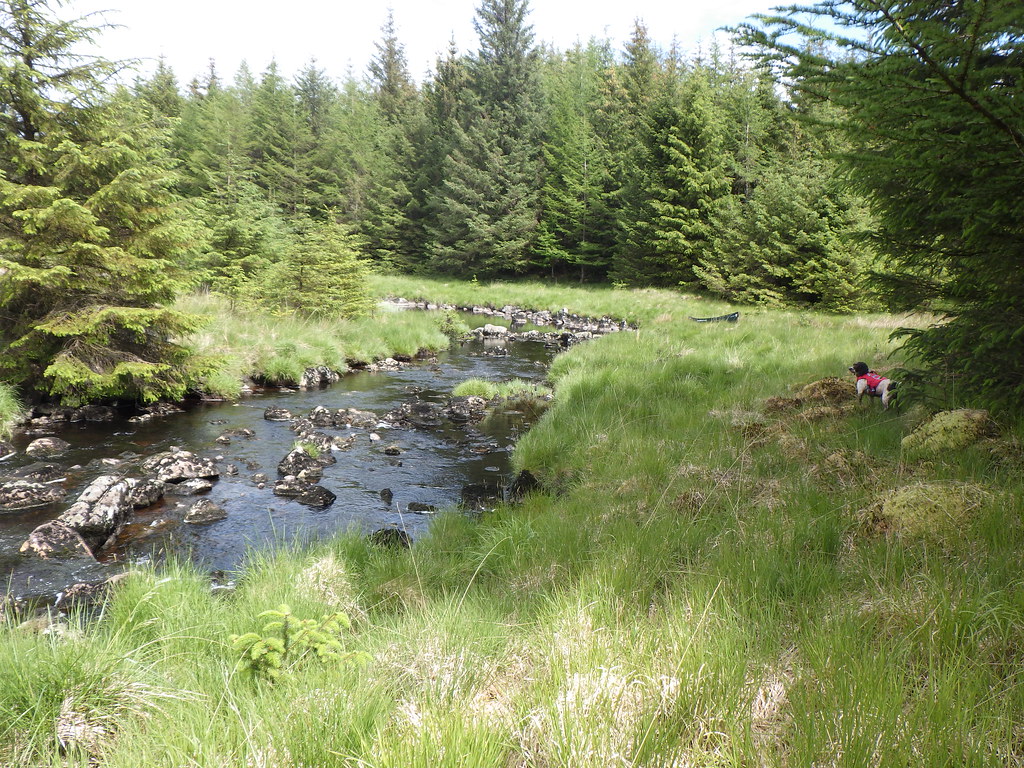 Im not sure how much lower than normal, if any, the streams were due to the several weeks of dry weather we had, but it was really rocky.

Next up was Loch slochy, which isnt very big but would be a welcome break from dragging the canoe. So i thought... 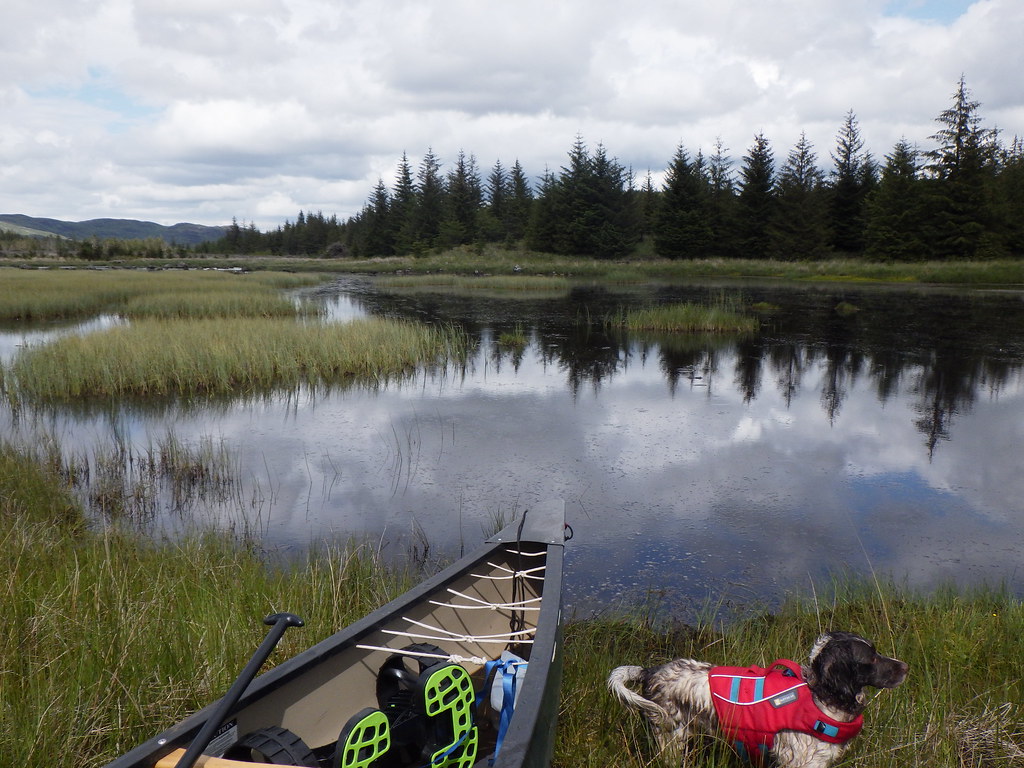 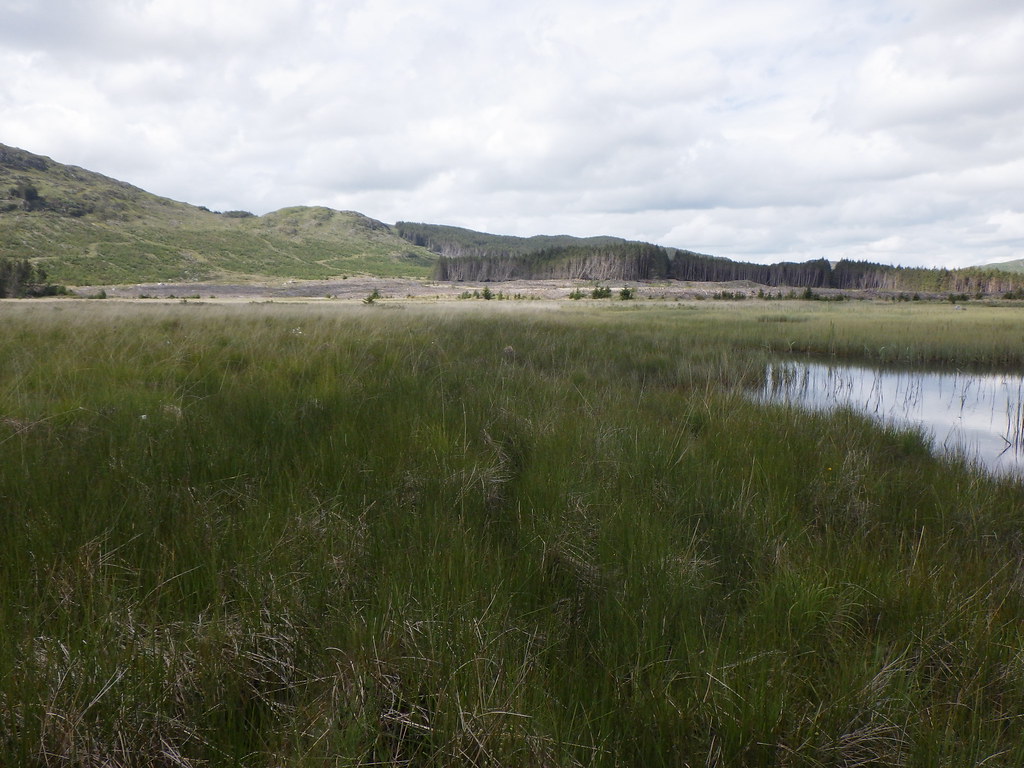 I again only managed to paddle a slight bit of Slochy before the water became too thick with mud and reeds. So overboard again, and wade through it hauling the canoe and trying not to get stuck in the mud. Out of Slochy into a narrow stream, again for a short distance before resorting to dragging the canoe alongside it. 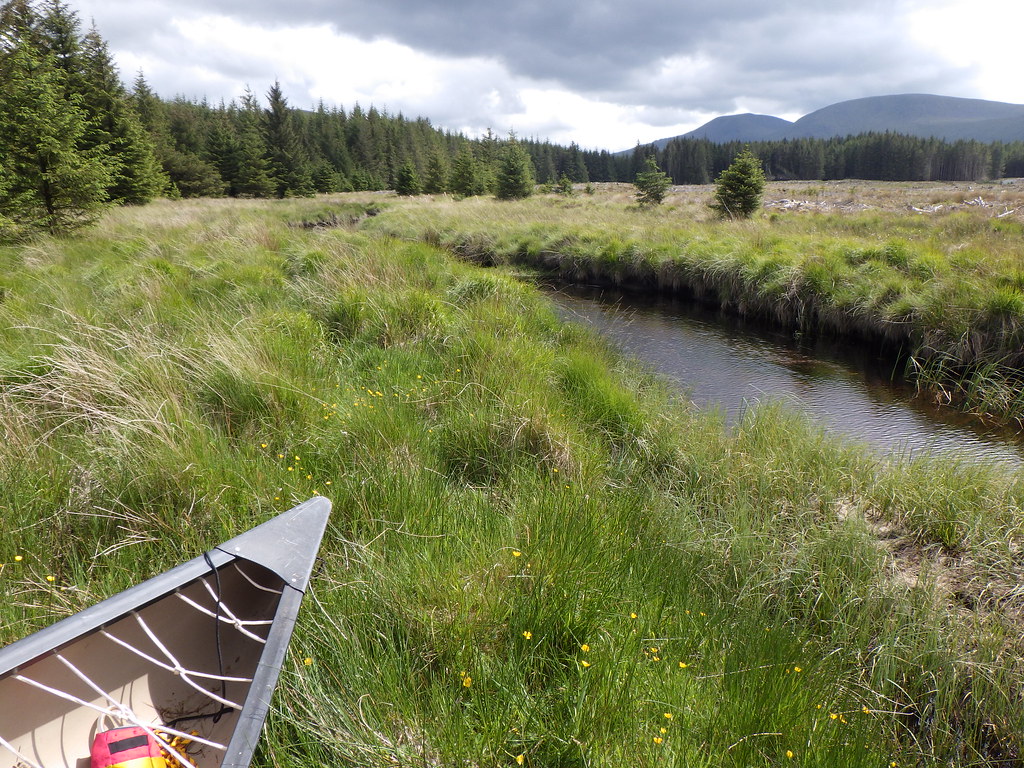 I believe this picture is where i then headed off down a firebreak towards Loch Macaterick. 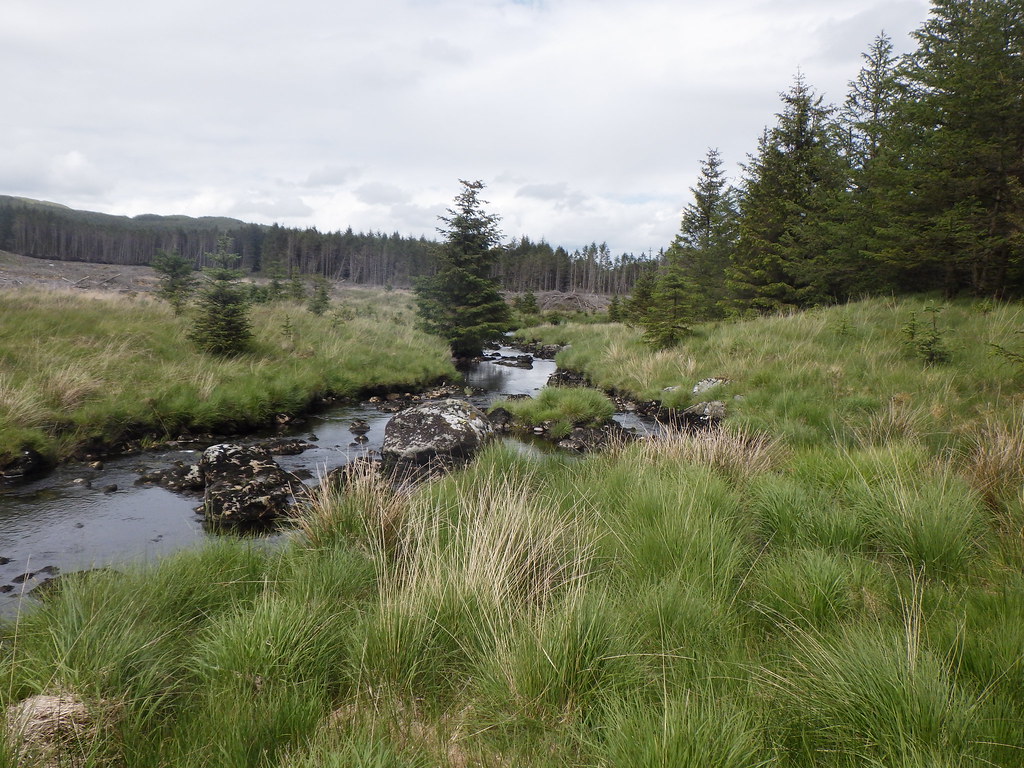 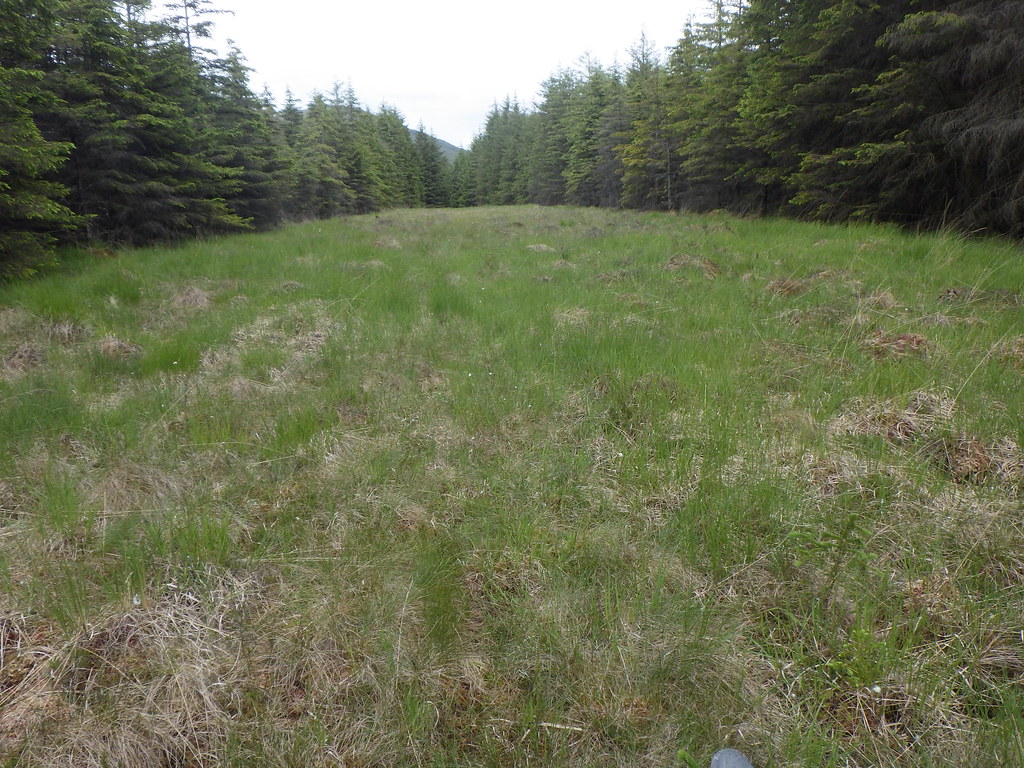 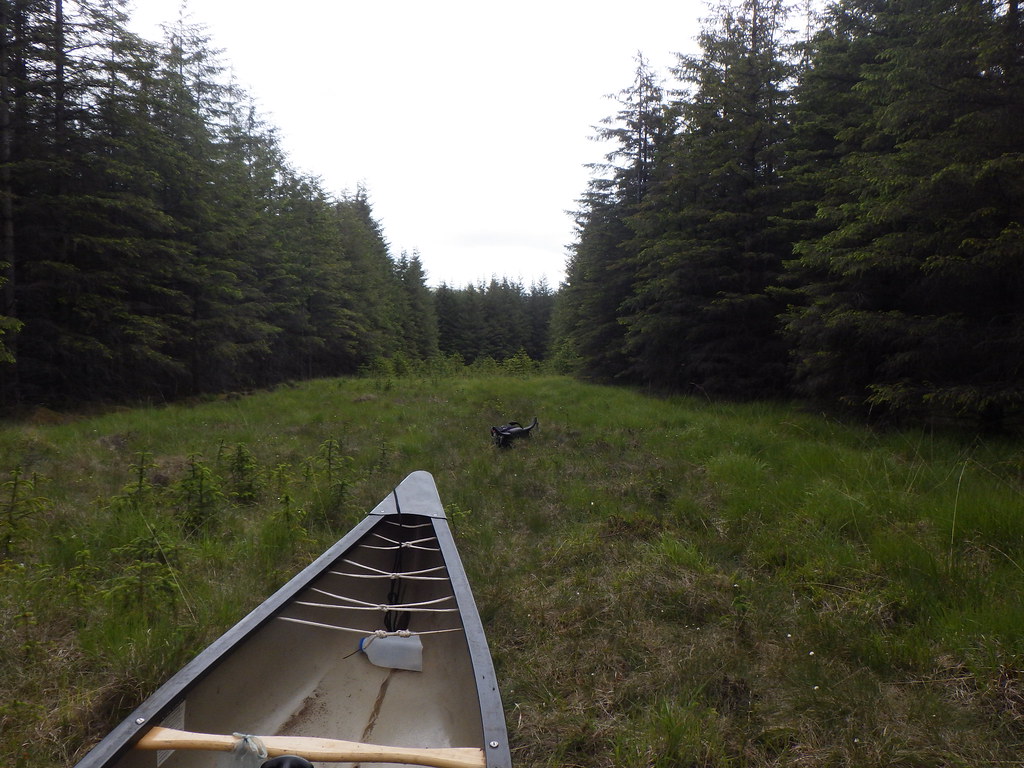 Eventually we got out of the firebreak, just on the bend above Cashernaw, to the west of Macaterick. Right, time to paddle ! 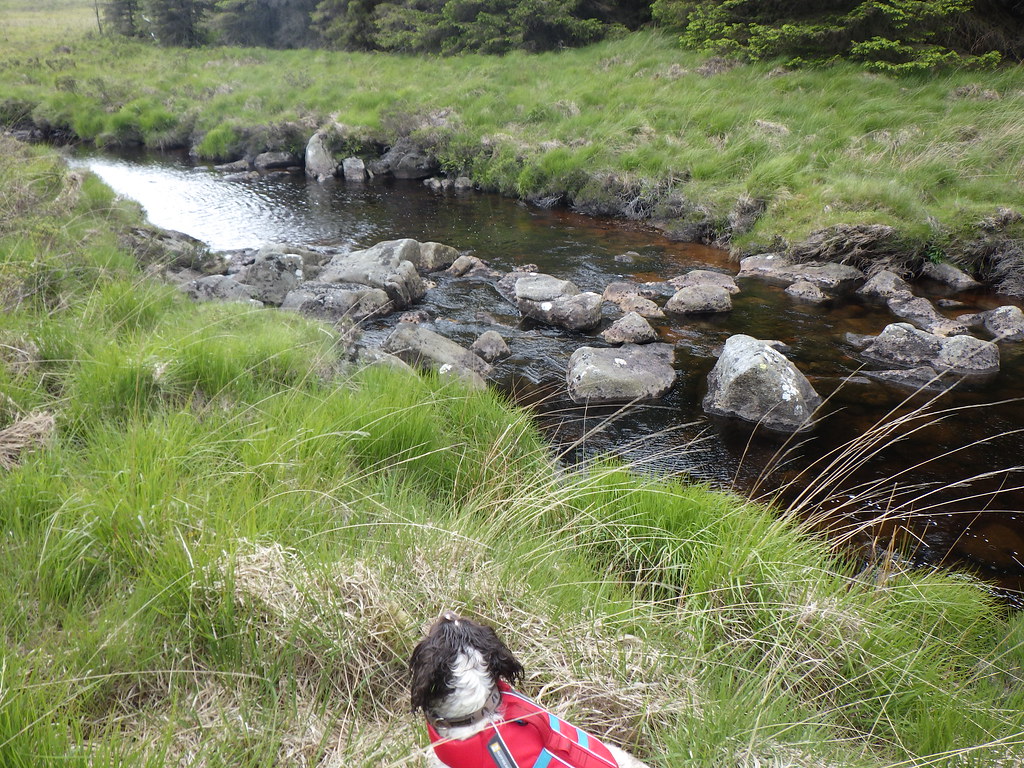 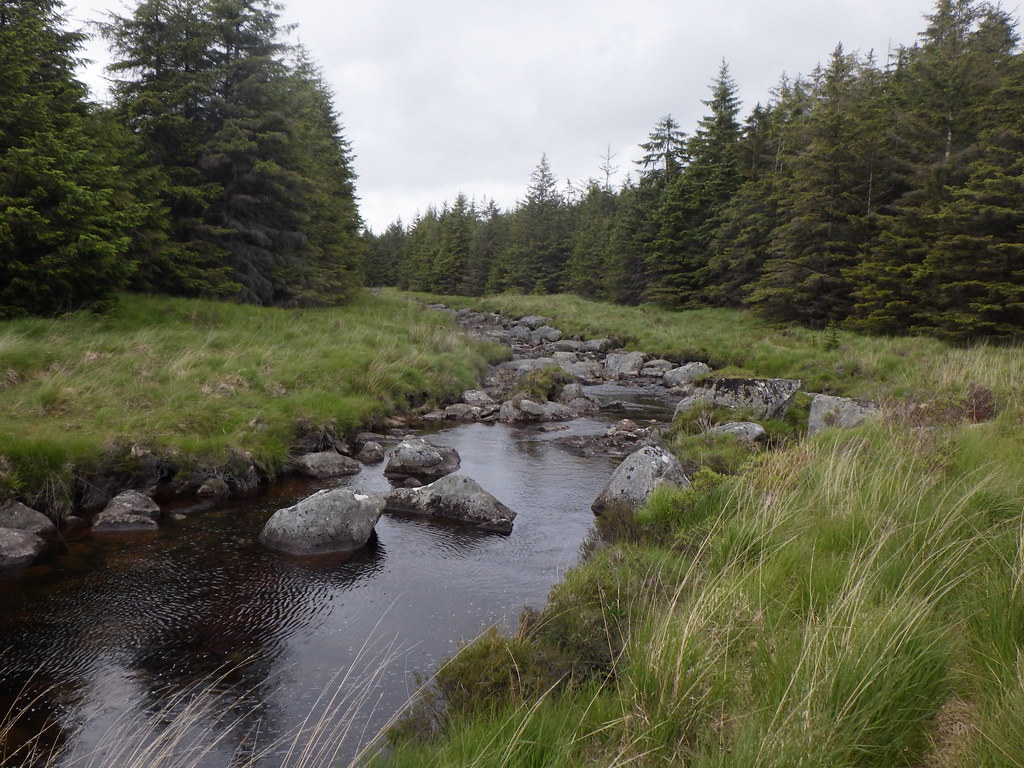 Or maybe not. More dragging. At least Rileys enjoying it...

It did eventually widen out and get deep enough for paddling not long before reaching Loch Macaterick. 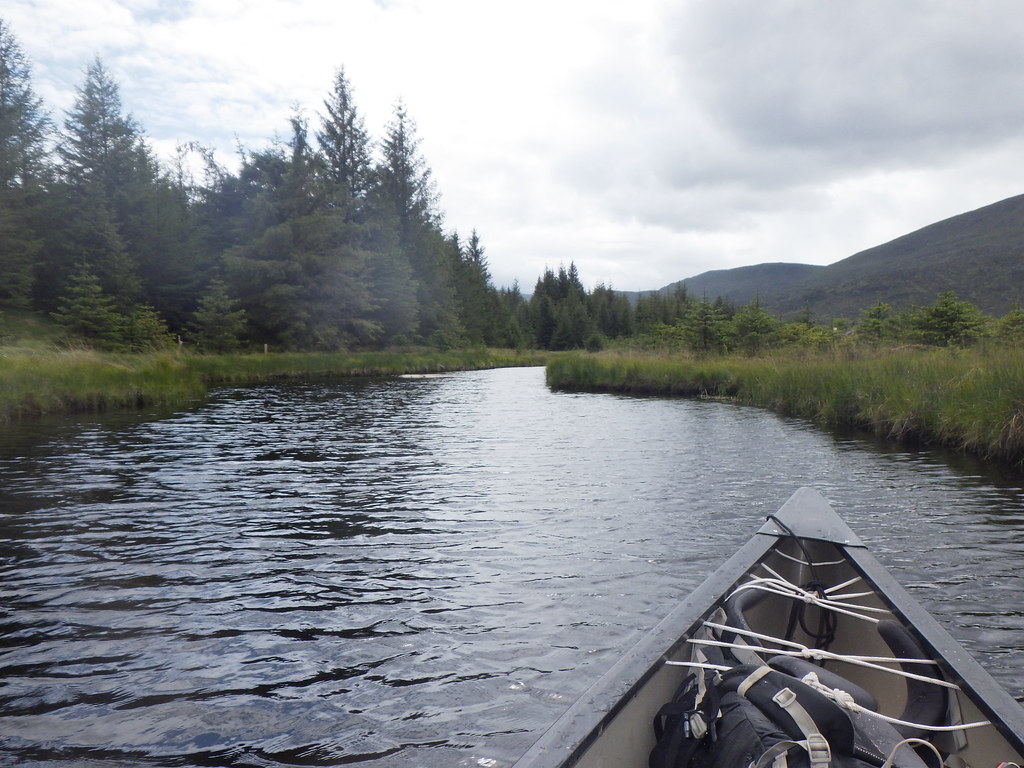 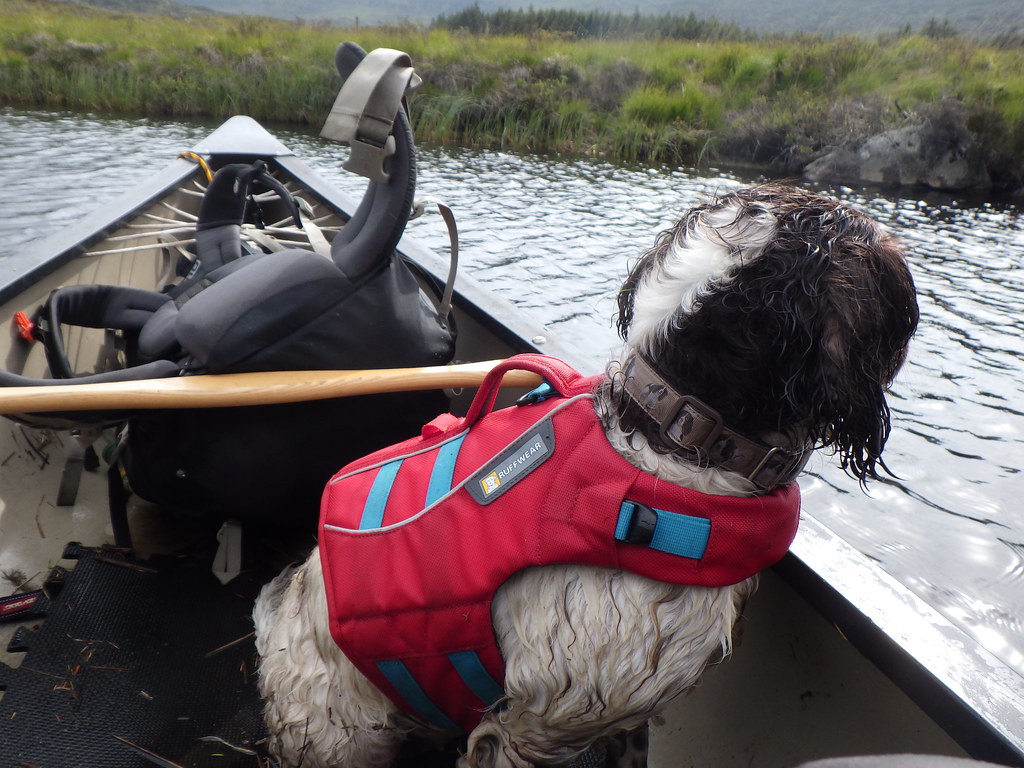 
First campsite in sight ! Saw some beaches on google maps ,on the small peninsula in the middle of Loch Macaterick, so that was my goal for day one. 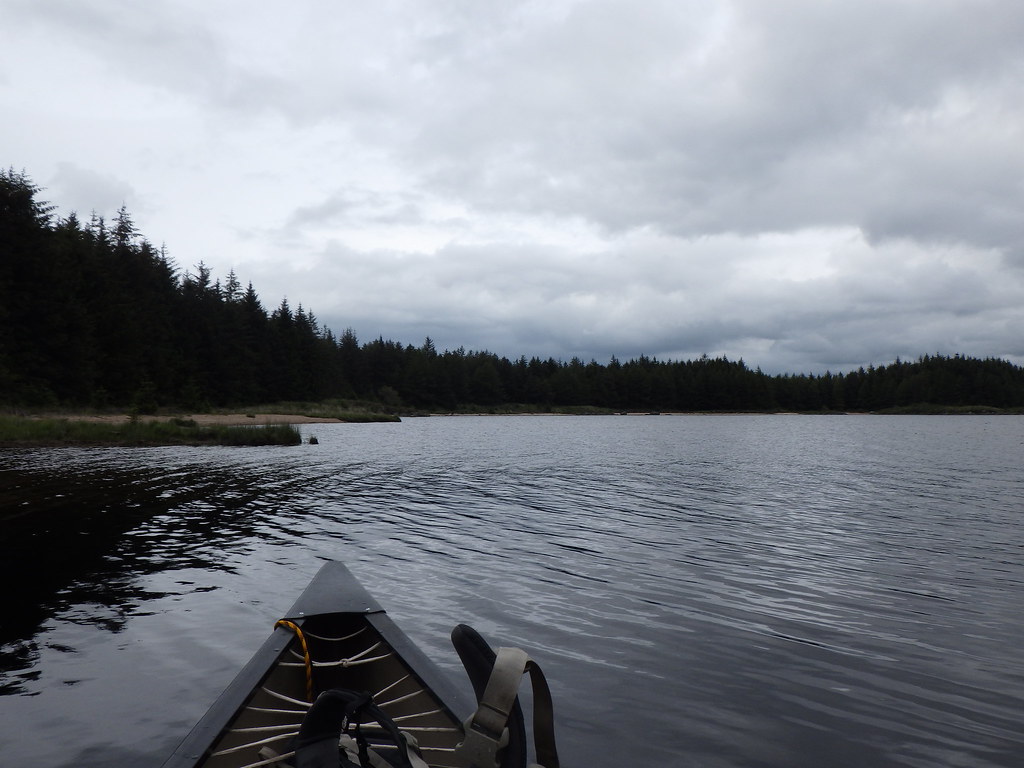 The peninsula is the trees on the right of the above photo. Lovely little spot, suitable for hammocking, tents, or bivvies. There was a small amount of rubbish about, but nothing too bad,probably due to access difficulty. Whilst i was setting up the tent, the rain came on, and the wind picked up quite a bit overnight. My tent partly collapsed at 3 in the morning due to the pegs pulling out of the soft ground.

We didnt do much that night, both had dinner, Riley conked out till morning, and i lay awake most of the night listening to the rain and wind batter off the tent.

Unfortunately ive lost what other photos i had from this point on,but there werent many due to it being pretty miserable with rain.My plan today was to get out of Macaterick into Eglin Lane and on towards Loch doon, then up to Finlas and camp at a spot i like up there. But it was still pretty windy, and wet, and i really didnt fancy another day like the previous if Eglin lane was going to be more of the same.

So i set off to the top end of Loch macaterick, over into Loch Fannie, and then out onto the forestry tracks. Thankfully from this point on i could use my canoe trolley, which had been no use due to the rough terrain so far. So i dragged the canoe out along the track untill we reached the main forest drive at CragFion bridge over the Whitespout Lane.
I was tempted to head from here over to loch doon and then continue the trip, but decided instead to call it quits. So i stashed the canoe and my gear in the bushes again, and set off on foot with Riley back along the forest drive to my van at Loch Bradan, then drove back and collected my gear. I drove out via Loch Doon, and it was way too choppy, so im glad i didnt decide to continue.

It was a real slog of a trip, and i said never again. That lasted about 2 weeks before i was considering it again. So i may be back, though maybe with the packraft....

I do love galloway, but if you go off track there, the terrain becomes really hard going. At least its quiet if you do.
Last edited: Mar 26, 2020
Reactions: Dogoak, TLM and Toddy

Brilliant and a real pick us up in this time of stay at home for most.
Thank you, the photos really add to the narrative, and we can almost feel the ache as yet again, it's out of the water and drag. Sounds like it was a real drag in places too.
Still, all in all a good trip, lots of exercise and definitely good for you
Lovely bit of the world, and though lowlands it's still a bit off the beaten track and fairly quiet of people.

Ouch, I feel for you. I thought my trip down a very low Vyrnwy this time last year was bad when I had to line the boat over rocks for a fair bit of the first day but your trip looks exhausting.

Is that route you tried one that you know others have done in the past or one that you planned using maps? If the latter I think you're very brave trying to pioneer a new route on your first trip

I hope I get a chance to do a river journey this year.
T

Thanks toddy. Definetly plenty of exercise, for us both. Not often she will lie down and sleep and leave me alone, but i got plenty of peace that night.
She's fairly got the hang of the handle now . Jumps out for a swim then comes back and paddles alongside so i can lift her in. Handy little outboard if i just hold on

Not that brave Broch.
Im assuming its alright to link here, but these guys have done two variations of it.

Nutters. Although their descriptions do make it sound not bad, so i do wonder if the water level was just lower?
"The Slochy Portage. An interesting mix of stream, riverbank and loch.Recommended "

I did also meet 2 guys with canoes before when i was there walking. I was on one of the hills nearby and saw the 2 canoes on macaterick. A little later in the day i was on the forestry track heading towards craigfion bridge from the other direction when i met them. They had done the same route and also gave up at macaterick.

The worst part was having to do 2 trips, one dragging the canoe and another for my rucksack. If i went with solo lightweight kit, and had a lighter canoe that i could carry instead of dragging, it probably wouldnt be as bad. The double trips is the killer
Last edited: Mar 26, 2020

Great trip report. I almost felt I was there with you. Lovely Springer btw.

That was like a breath of fresh air, thank you for sharing

crosslandkelly said:
Great trip report. I almost felt I was there with you. Lovely Springer btw.
Click to expand...

Second that - on both counts - here's mine before she went blind. I've come to the conclusion all springers share the same brain

Nice Broch.
She's my first, but if the rest of them run about mad every second you are out, chasing birds/helicopters/planes/leaves/just anything that moves really, then yeah she's probably got the same one.
She cant sit still in the canoe, constantly moving about, climbing over the rucksack, climbing round behind me etc. Constantly tries to stand on the sides and falls out.

She climbed up on the plastic triangle at the front of the canoe , it was slippy of course, she fell off the front and i ran her over....
I got a dirty look for that one.

That was at loch awe, the same trip that she almost took the canoe out by herself. I left it sitting almost fully in the water just till i turned and grabbed my paddle. She ran and leaped into it with enough force to push off, and away she went.

Bonkers
Reactions: crosslandkelly and Broch
You must log in or register to reply here.

Out and about Catch-up Thread.

Out and About Wednesday at 4:02 PM
Tank

B
Trip Report Overnighter in the wool blanket...