I borrowed a large old gazebo a while back for a party. It was in a bad state with many of the poles damaged, repaired or broken having been taken away by high winds at some time (not while I had it I should add). When I went to give it back, the group I borrowed it off refused to have it saying they no longer had room to store it and they had bought a new one. So, I am left with a load of 40mm steel tubes (as I said, many damaged) and acres of waterproof canvas type material.

What to do with it all?

The window panels I am going to scrap but the rest must have some use! The largest piece (the roof) is 6m x 4m; the smaller end panels are 4m x 2m+ to the top of the wall. The centre of both end panels has a zipped in door flap. The material is 'canvas' like with a robust waterproof coating on the inside.

Some of my thoughts:

Use the large panel as a group shelter (it is heavy though)
Make a medium sized Baker tent (I think there is just about enough canvas) - again, it would be heavy
Cut and stitch the larger panel to make a couple of smaller 4m x 3m tarps - always useful
Make some waterproof bedrolls or groundsheets
Make canvas bags and knapsacks

Ideas? Oh, and it's sort of Airforce blue 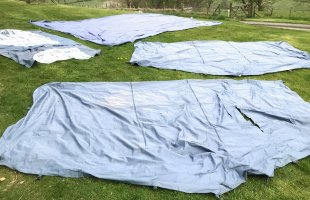 Make yourself a swag.

I've just dropped some canvas to a local seamstress to make a couple of portable stools, ala woodland ways: https://www.woodland-ways.co.uk/blog/bushcraft-other/make-your-own-portable-stool/
Reactions: MrEd

Someone on here was looking for a bag to hold a pair of coir bell tent mats.

One could say a tarp, but I am thinking of something that you could set up over a work area, shade it from hot sun, shelter from showers. Not be too worried about leaving it up for a week at a time. I have tried that sort of thing with a 4x3 urethane/nylon tarp and it was not really big enough, nor did it cast deep enough shade for it to be cool under it in the summer.

Plan A: A couple of tarps that can be strung up with just a rope between trees.
Sunshade or rain shelter. Quick. Big. One with a side for a wind break.

Plan B: I want a big enough base camp tent for a stove for both heat and cooking.
On rainy days, I want to be able to sit outside the door (rain fly?) and do crafty stuff. That would be attractive enough to keep me from going home to my own bed every night.
Dead level place for 5-6 of these tents, good water, 25 km up the Holmes valley. 45 minutes.
This is the morning view:

I'd use those big pieces to make an adjustable shelter. Something like the bell ended A frame tents the re-enactors use.

This one is from Past Tents. 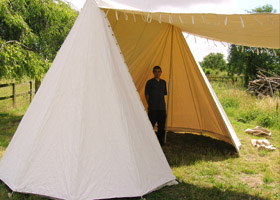 I'd hang onto some of the window bits - useful for making wallets, map cases etc.

Do you canoe? perhaps a canoe sail.

If it's waterproof, how abouts a Coracle?

Could make little poncho's for all your little squirrel friends?
You must log in or register to reply here.