Day Out 1st of maj, a rainy day - rather green than red!

In Sweden the 1st of may is a socalled "red day", meaning a national holiday. It is a celebration for and by the working class, a day where socialists of all sorts go out and have marches. For or against what is unclear to me, really. I myself rather have a green day in order to avoid red of any kind.
It was a rainy day, exactly what I had hoped for, because I could see how the shelters held up. We had some rain and wind in the past days too, so I was kind of curious.
During the day however I noticed that my cellphone camera was acting up, messing up the focus and colours, in many cases quite severe. So I apologize for the quality of some of them. Had to touch up quite a few of them to make them somewhat presentable. 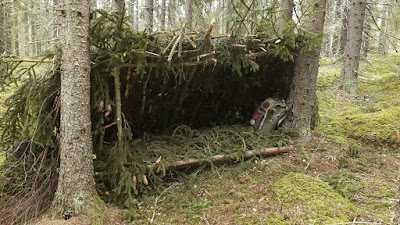 The tools of the trade for today; my Swiss gaiters and German gloves. Together with freshly polished boots these gaiters kept my feet and legs dry and I must use the gloves, since it turned last christmas that I develop an allergic reaction to spruce needles. I used these gloves too, the last time. 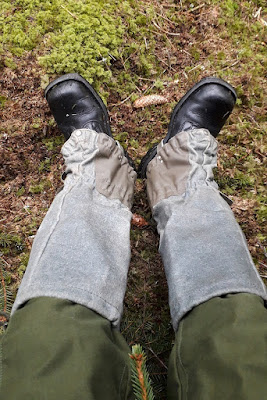 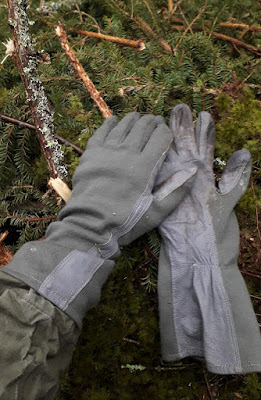 I dismantled the small oneman shelter and was surprised to find the inside dry! Despite being unfinished it did its job, more or less. Next time I need to make the center pole longer and the entrance higher. Now it barely reached my hips and I had to extend the front so that all of (little) me would fit inside. Raising and lengthening it makes it more accessible and would create room for movement and gear. But in times of need it would have done the job quickly. 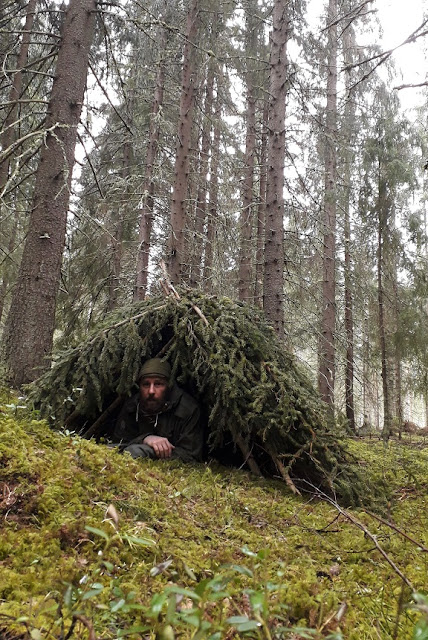 With all that extra green laying around I figured I might as well experiment a bit with the lean-to. That too was remarkably dry on the inside, btut I figured that it it would be windy and raining the front would still get wet. So I created an awning. Or an overhang at the front that would shield the inside from both wind and rain. I also added the longest boughs to the top, plugging the holes I noticed. The overhang also drastically reduces the large dark shade, making the shelter less noticeable from a distance. Downside is that the boughs get into your face. 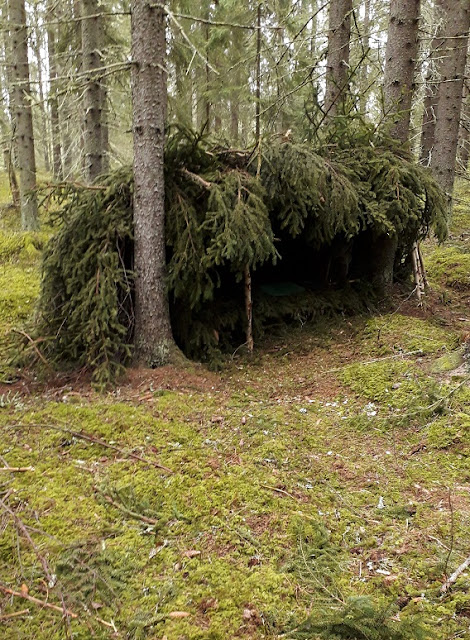 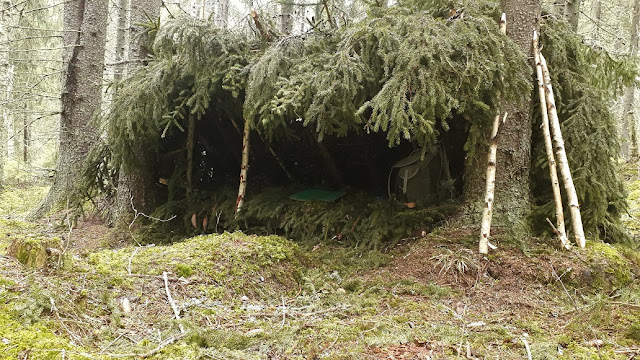 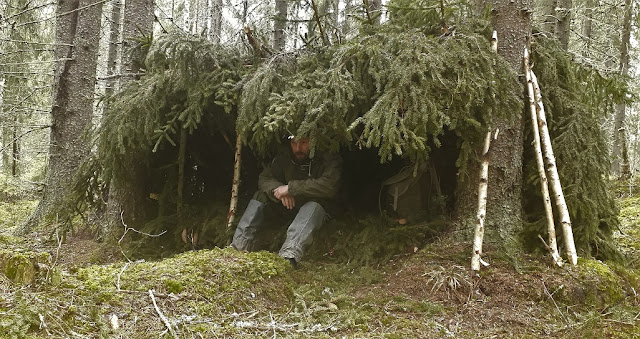 I took the palatka and spread it out over the boughs, gather a few handfulls of all the small twigs laying about, put mu sittingpad on top and laid down, one half of the palatka under me, the other over. It was quite comfortable and I lay there for a while, listening to the birds, the wind and the pattering of raindrops. I even managed to doze off for a while!
But for a good night's rest I would add an extra layer of the smallest twigs and a layer of sphagnum moss.

The view from the shelter when laying down in it: 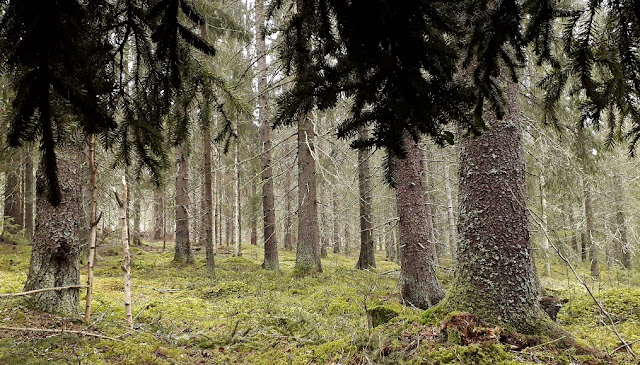 After this intermission it was time for (another belated) lunch and I had initially thought of making that over an open fire. However the underground is nothing but boulders, roots, humus and moss. In many places it is hollow!
Because there was a large chance of the fire going underground when done just like that I went on the hunt for rocks to be used as a bed. Around camp nothing was to be found, but I knew that the paths, cut by the forestry machines, always have loose and fractured rocks, uprooted and crushed by the tracks on said machines. I "just" had to go and get them.
After the fireplace was in place I needed to go and gather firewood and twigs, of which there was plenty hanging from the large spruces all around me. The downside was that most were covered in lichen, which acts as a sponge when it is damp or raining..... as it had been doing. Fire preparation was key, so only the branches and twigs that readily snapped and had little lichen on them were used. Scraping away the lichen and the outer surface revealed the drier wood underneath and splitting the branches made the dry inside available. I always challenge myself to get a fire going with 1 match. Today I needed 3..... and the pattering you hear is n ot just the crackling of the fire, but rain as well.

And then... lunch!! On today's menu was Austrian gulash soup..... from a can.
For those that have such a cooking kit as I do, the trick is to stick the hook through the square eye on the side and move the eye of the hook over the second notch in the handle. That way you can handle the pot and lift it, while eating from it.
Not much later I packed up again; my greentime-quotum had been filled for today. I will make a detailed post on the shelterbuilding at a later date, so keep an eye out for that. 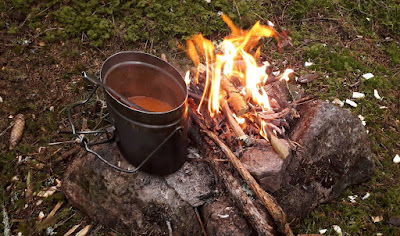 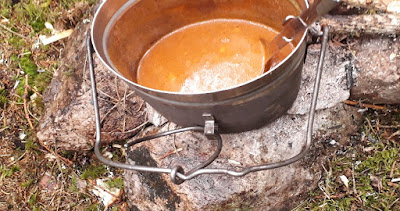 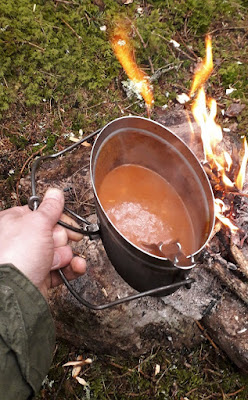 fabulous, i am very jealous