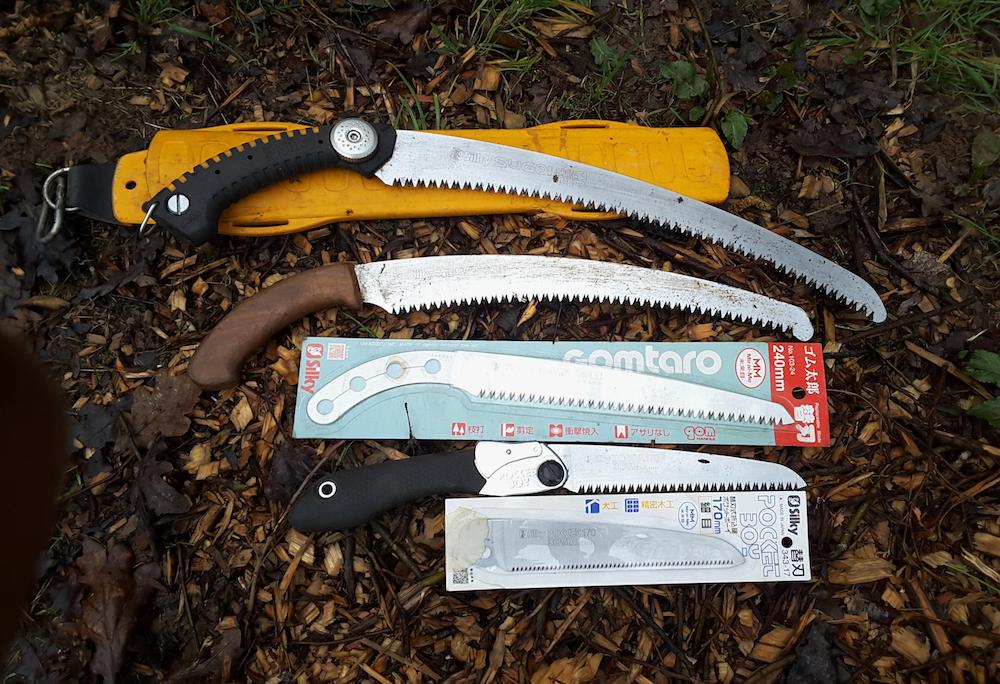 What saw is good for you?

Whether it’s as mundane as cutting firewood or as involved as building an entire camp, there are lots of times when a saw is a vital piece of equipment to the bushcrafter. This is a short introduction to some of the types of saw that you might come across and a little about their usefulness in bushcraft. A small length of chainsaw chain with a handle on either end. These are sometimes used for cutting high limbs in trees, I bought one once for that purpose and it was rubbish! Several versions are also sold by the survival or outdoors retailers as an aggressive alternative to a folding saw.

The idea is great and I’ve seen videos of these things cutting small trees down, but they are a lot of work because they have to remove a lot of material; they also get stuck in the tree easily and twist or tangle for fun.

The better made versions may be a tiny bit more efficient than chopping, but a bowsaw would be faster and far less arduous. They are also useless for anything but roughly cutting large pieces of wood, which isn’t what we tend to do in bushcraft.

The mighty SAK provides again! The saw is too small for cutting firewood but it is a very useful tool and often proves handy for cutting small pieces when least expected. Such as when out with the dog and you spot a hazel pole that would make a perfect walking stick; chances are you won’t have a big knife, axe or another saw with you. These saws are also great for the small, precise cuts such as often employed in building traps, shelters and other craft projects.

Most people will have one in the shed. They come in a huge range of shapes, sizes and qualities. Generally speaking, these are of limited use in bushcraft as the teeth are normally set up for cutting seasoned wood and the saws themselves are often too large to carry with you in a rucksack. They shouldn’t be ruled out entirely though.

Older saws (and very good modern ones) have teeth that can be sharpened and set, so it is possible to modify the saw for cutting green wood, all you need are a couple of files and a tool for setting the teeth.

Most cheapy modern saws have hardpoint teeth that are too brittle to allow this modification, but they cost very little money and work surprisingly well if you have nothing else. They work great if the firewood isn’t too thick, so for campcraft, they can be great, but don’t try felling a large tree with one.

The blades for these saws are available in a range of lengths and tooth patterns, so you can carry several blades for the sake of only a few grams. The large and unwieldy metal bowsaw frame can be overcome by using a frame that folds up or dismantles. Wooden framesaws are making a comeback and are quite simple to make. They fold up or dismantle, leaving you with a bundle of bits no longer than your blade and fits easily down the side of a rucksack. Back in 2006 we had a ‘Build a Bucksaw’ competition at BCUK and it spawned some great ideas. Two of my favourite examples were made by Steve Lane and are pictured below (pictures courtesy of the maker).

Not so elegant, but a lighter option is to make a frame in the woods. The blade can be coiled up inside your cookset, wrapped around your waist or slipped inside your rucksack. A stick cut to about 1 ½ times the blade length and a wooden peg (or split ring) fitted through the holes of the blade is all you need. This type of frame is a very quick and bushrafty solution. Though mostly the blades are designed for rough sawing, you can get finer toothed carpentry blades for old school framesaws, so potentially a very good choice for the bushcrafter.

Mostly these saws cut only on the pull stroke, which allows the blades to be thin without buckling in use and so makes for a very fast and controlled cut. Virtually all of these saws have replaceable blades, so you could even buy one of those and make your own handle to match the rest of your kit, or carry a variety of blades for one handle with you.

It’s a matter of personal choice whether you go for a fixed or folding, each having their pros and cons. Fixed bladed saws take up more room in the rucksack, being longer but they have longer blades as the handle can be relatively much shorter and there are no pivot points to work loose (I’ve seen lots of people close folding saws on their hands!). Some of the more arboricultural versions have curved blades, which make for a very efficient saw when cutting trees, limbs and firewood, but they take some getting used to and no good for joinery.

The most popular folding saw amongst bushcrafters is the Bacho Laplander. It is a good mid range saw, but there are many other brands that shouldn’t be over looked. I’ve used most of them and I prefer the cheap Florabest from Lidls to the Laplander I had. Most professional woodland workers use the best quality saws and they are made by Silky (aka Silky Fox), they are a little more expensive but the blades cut faster and for much longer than the Laplander.

Silky saws also come in a huge range of blade shapes and sizes, tooth sizes (fine teeth for finer work and coarse teeth for cutting firewood and trees), different handle shapes, colours, folding and fixed, etc. I only use fixed blade Silky saws in my woodland, but I also have a 210mm Pocketboy folding Silky in my carving bag.

The cheap saws work well but dull fairly fast, so if you don’t use them a great deal they are fine, but if you plan to use your saw a lot then don’t mess about and get a Silky. I’m not on commission, just 10 years managing woods and using all of the saws mentioned, a lot!