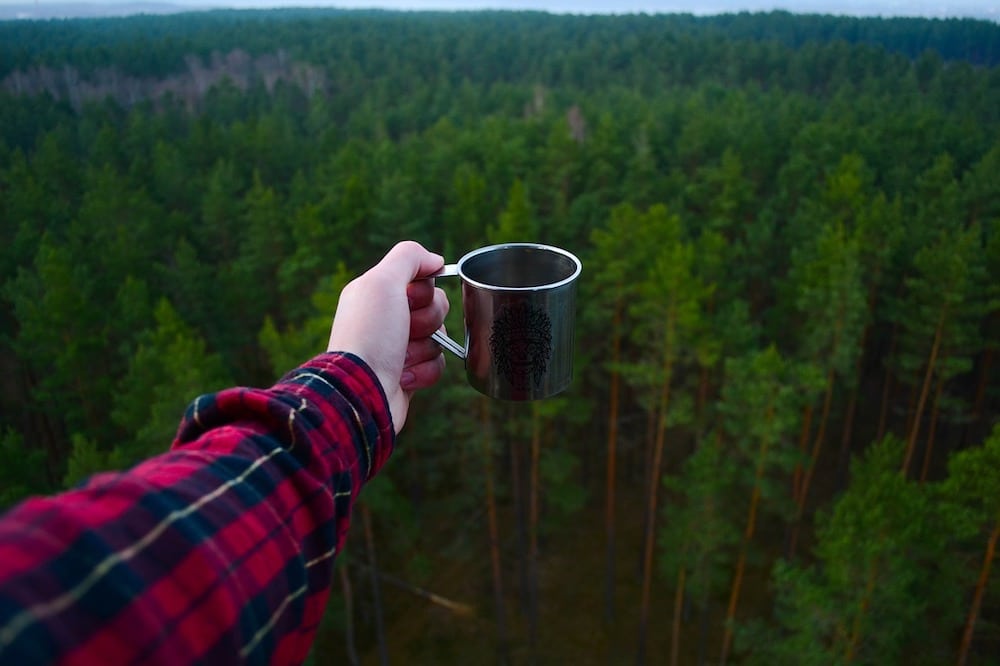 It's all about a good cup of tea

Survival is all about a good cup of tea

This is an idea which I suppose was born from a conversation I had with Mors Kochanski about a year ago. we were sitting by the fire discussing Mors favourite beverage coffee, when we came to the conclusion that as long as you had what you needed to make a cup of coffee/tea/hot chocolate you could make yourself very comfortable in the wilderness.

I thought back to this conversation recently whilst in Brunei trying to form a lesson plan for teaching civilians (not survival/bushcraft enthusiasts) preparation and initial action plans for becoming lost in the jungle.

“FOR GOD’S SAKE MAN, DO SOMETHING!”

The primary mistake made by individuals who suddenly realise that they have become disorientated is to assume that they must do something immediately about their situation, even if they are not sure what exactly they should be doing.

This overwhelming urge to do something often leads to people choosing a random direction which they assure themselves is the right way, setting off and continuing to wander with increasing panic until darkness falls and they are forced to stop and endure an extremely uncomfortable night out.

Of course the correct action would be to stay put, relax and think about the situation whilst preparing for the possibility of an extended stay, once you have relaxed and taken the time to think about what happened and observe your unfamiliar surroundings things often become clearer (this takes at least an hour) you may suddenly realise exactly where you went wrong and be able to orientate yourself with your surroundings.

If you don’t take the time to sit down relax and think, and instead simply push on without knowing where you are or where you’re going you are just making it harder for people to find you as the chances are high that you are simply walking further and further away from your planned route.

There are of course acronyms used for training the military which cover the correct actions in this situation:

However, it has been my experience that the desire to be doing something to help the situation is so strong that many people will continue to wander aimlessly hoping they will find there way even whilst repeating to themselves Stop, think, orientate, plan. they have convinced themselves that the initial minute and thirty seconds that they stopped and looked around as it dawned on them that this wasn’t where they were supposed to be, constituted the stop, think and orientate portions and that deciding to walk “Thaddaway” constituted a plan.

What I felt was needed was a simple and familiar task which required little or no cognitive thought and which would occupy the individual satisfying their need to do something whilst at the same time forcing them to stay in one place long enough for them to relax and return to a rational state of mind.

This task would ideally be something that was static and took time to complete but which every individual knew how to accomplish without thought or any special training, it would also be beneficial if the task went some way to preparing them for an extended stay if necessary.

Thus I decided to tell my students that they should at all times carry a small pouch on their belt when heading out which contained all the items necessary to make a cup of tea in the bush and as soon as they found themselves outside there comfort zone they should immediately sit down and start brewing.

This action whilst satisfying the need to do something forces the individual to stop and prepare a fire, then boil some water, have a warming drink and a think, all without consciously thinking about it

In doing so they have created a fire which will provide them with warmth, cooking, water purification, light, a rescue signal, and psychological security.
They have hydrated themselves and provided warmth internally via the tea and more importantly the action of making a cup of tea is a familiar one and undertaking a familiar task makes the situation feel less threatening and goes some way to making the person psychologically more comfortable.

In addition to all this, the ‘cup of tea’ method deals with a fundamental part of such situations which is often overlooked in survival and rescue training…. cultural attitudes and social stigma.

“WHY DON’T MEN ASK FOR DIRECTIONS?”

A fundamental factor when explaining why people acted the way they did when faced with the realisation that things were going wrong (and one which most effects men) is caused by social and cultural conditioning.

It is well known to search and rescue institutions the world over that lost men (its almost exclusively males) will sometimes deliberately hide from the search teams and some will deliberately injure themselves or feign an injury when they realise they are about to be rescued.

WHY? It’s the case of a simple five letter word which plays a big part in the physiological approach to a survival situation especially with males:

In the first instance they hide from the rescue teams because they are still convinced that they can get themselves out of this situation without the perceived shame and ridicule of having to be rescued, often they feel that they if they can quietly follow the rescue teams without being noticed they can get out and announce confidently “Lost? Me? Never! I knew exactly where I was, I didn’t need rescuing”

In the second instance people who are simply lost will injure themselves deliberately or fake an injury as they realise rescuers are coming for them, this time to avoid the perceived ridicule of being “an idiot who got lost and had to be rescued, by real men” with an injury (fake or otherwise) they can claim “yes I was making a daring ascent of the north face in white-out conditions when I was caught in a rock fall and injured, I therefore had to await rescue whist enduring the harsh conditions and my injury, Lost? No, not at all.”

Sounds crazy I know but any S&R personnel will confirm the above, Male pride is a powerful thing (powerfully stupid)

The other social aspect is the stigma attached to carrying survival equipment, many people fear that when Joe public asks “what’s in that pouch on your belt” and receives the reply “my survival kit” they will imagine them to be a Rambo wannabe who is probably a little strange and sleeps in camouflage pyjamas.

Even those that own survival kits often don’t carry them because “it’s only a day walk, I will not need it” the perception being that survival kits are for jungle expeditions and mountaineers

How does the cup or tea approach combat this then? Well, the feeling that you must do something often stems from the fear of how you will be ridiculed if you don’t get yourself out and have to be rescued.

As an example scenario the group that I was teaching in Brunei were all expatriate workers and participants in the Hash, for those not familiar with Hashing it is a weekly social event which involves cross country running along trails marked with paper followed by much consumption of alcoholic beverages (often called a drinking club with a slight running problem).

Where ever there is an expat community there will be a hash club and the runs cover what ever terrain the country offers in Saudi Arabia the runs are done in the desert and here in Brunei they take place in the jungle, the participants don’t actually know where the trail goes they just follow the paper.

The combination of often harsh environments, the runners not actually knowing where they are going, and the often poor preparation of the participants who run off into the desert or jungle late in the evening wearing football boots, shorts and a t-shirt carrying only a 1lt of water means that becoming lost is common place and deaths although rare have occurred on hashes.

People who do become lost can look forward to the well established tradition of being ridiculed for the rest of the evening and forthcoming runs until the misfortune of someone else moves the focus of attention.

Hash clubs are a perfect example of the worst conditions for the social pressures which lead to serious survival situations.

Even though they are about to run a route they don’t know into the jungle/desert, runners don’t carry survival equipment because no one else does and they don’t want to appear odd, peer pressure at its best.

When a runner loses the trail they often don’t sit and wait to be found because this will entail ridicule, instead they wander desperately trying to find the trail again in the failing light.

In these often testosterone rich environments the cup of tea approach often works where others fail, by short circuiting the whole “Oh **** must do something, must find the trail, don’t want to look like a fool, I’ll go thaddaway” scenario.

With my students I simply instilled the understanding that if anyone asked what was in the pouch it wasn’t a survival kit, it was a brew kit for making a cup of tea when they took a rest stop. This doesn’t seem as odd to Joe public and seems positively normal if you happen to be English.

If you find yourself lost and disorientated with a sudden urge to do something and a fear of being ridiculed after rescue, STOP and make a cup of tea, since you haven’t wandered too far of course and you now have a fire someone will probably be along shortly and when they do happen upon you, your not lost you simply stopped for a cup of tea, would they like to join you? You can walk out together after.

And if no one finds you tonight, well you have a fire going, some water purified and enough tea for tomorrow and most importantly your not thrashing your way through the jungle in the dark, thirsty and exhausted with no idea where you’re going.

Survival, it’s as easy as making a cup of tea.

This article was first published on Bushcraft UK in 2005