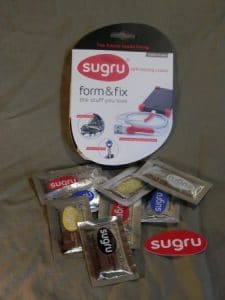 Sugru is a self-curing rubber (the world’s first), available in 5 basic colours (black, white, red, blue and yellow), that can be mixed together to give all sorts of colours.

Sugru can be worked and shaped by hand like a modelling clay, sets to a tough, semi-flexible rubber feel (the time to set depends on how thickly you use if, but mostly overnight) and it will stick to almost any materials – steel, wood, glassfibre, ceramics, plastics and even fabrics like nylon, Gore-Tex, Neoprene, linen and cotton.

Once set, Sugru will withstand extremes of temperature from below freezing (-50 degrees C!) to hot (+ 180 degrees C), is sweatproof, weatherproof, waterproof, heatproof, insulates from heat and electricity, but is ultimately removable from most surfaces (but not fabrics).

Conceived in February 2003 by Jane Ni Dhulchaointigh while she was studying at the Royal College of Art, sugru was launched in 2009, the intervening years being spent developing sugru’s unique chemistry. It has since won accolades and awards including being one of “Time” Magazines “The 50 best inventions of 2010” (ranked well above the IPad) and Jane has won the London Design Festival Design Entrepreneur Award. Sugru has been dubbed the “21st Century Duct-Tape” by Forbes.

Promoting a culture of creativity and resourcefulness, Jane sees Sugru as an antidote to the modern wastefulness of the throwaway mindset.

OK – what can sugru do? The answer to that seems to be limited only by your imagination.

My first experience of sugru was using a sample pack to repair a plunger type sink plug for my aunt. The linkage between the rod you press down on and the rod this forces up to raise the plug had been bodged in the fitting and was held with a poly bag twist tie wire – which failed! With limited room to work in (without dismantling the whole bathroom) I replaced the wire with Sugru wrapped around the two rods to fine effect. I have no photos of this as there was no room to get hands and camera into the limited working space.

I then tried sugru to customise the grip on a knife I love but rarely use due to the shape of the grip forcing my fingers down onto the edge (I think it is a Finnish Special Forces Survival Knife and worth money to a collector .. but to me it is a knife I want to use more so I am not worried about customising the grip). 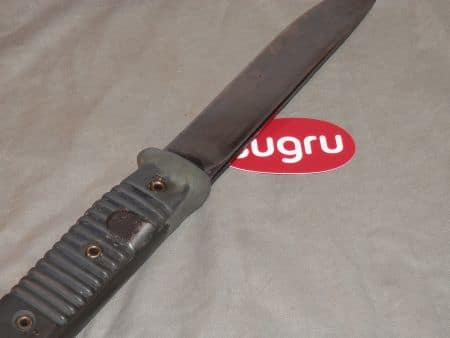 One packet of blue, one of yellow and half a pack of red mixed up a nice muted olive green and I moulded my knife a new guard, bringing the sugru onto the ricasso and up onto the existing rubber grips. The colour match with the existing grips is not perfect, but, to me, acceptable. 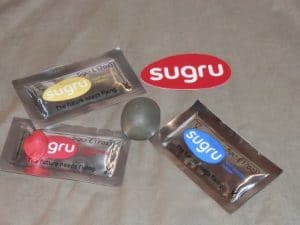 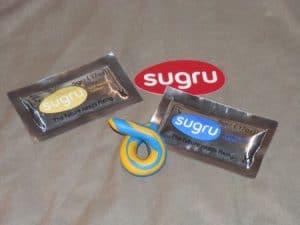 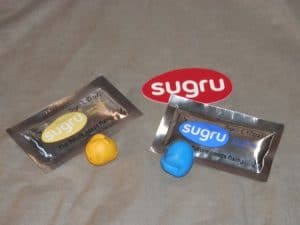 With the remaining olive mix I formed 6 zip pull extenders and a grip back for a rather small steel flint striker. These were all set aside to cure while the remaining half packet of red sugru was used to repair the insulation on one of my favourite folding handle cooking pans. 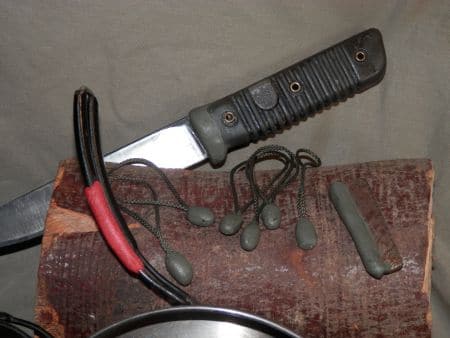 A range of colour blend “recipes” are printed on the sugru packaging.

I was pleasantly surprised to find that, after it was cured, I was able to carefully carve (with a very sharp knife), and even lightly sand, the sugru to good effect and ensure that the new guard on the knife fitted into the original sheath for the knife.

So far, and despite hard usage, all my new sugru adaptations are serving their purpose well without cracking, flaking or coming unstuck.

I am truly impressed with sugru and a packet or two will live in my repair kit, with a reserve held in the fridge. The day of repair rather than replace; adapt rather than compromise, and make rather than buy, is a whole lot closer now.

All the colours blend easily together to provide a huge possible colour-match palette – or you can just use the primary colours provided for a bright look.

Sugru in its uncured state may provoke an allergic reaction in those sensitive to the chemical components, so those with known sensitivity should wear gloves in usage, and sugru should not be swallowed. More information is on the packet. 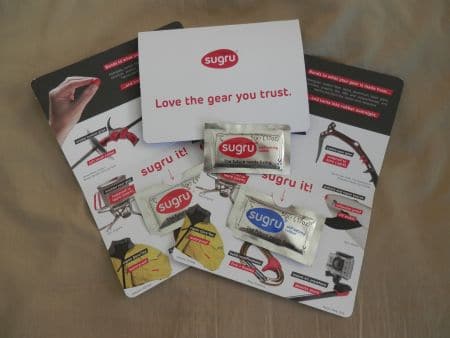 Sugru has an unopened shelf life of about 6 months (18 months in a fridge) and is one of the most versatile bits of kit I have ever seen, with more applications than you could ever dream of.

It is good to know that sugru is made in the UK (“with science and love”) and is proving a great seller world-wide.