Like many others, my early interest in Woodsmanship or Backwoods Living; had been kindled from the Scouting Movement and such programs as – The Bush Tucker Man, Lofty Wiseman’s SAS Survival Handbook and later Ray Mears books and TV series.

In 2004 I found a new title for my hobby, I came across BushcraftUK, with its wealth of knowledge and helpful advice. I joined the forum, hoping to learn all that I could, building on my experience of Scouts and the armed forces that had given me an understanding of many of the topics being discussed.

I first met Tony at a gathering near Reading in about 2005 where we both had the simultaneous thought of Geez, he’s a big bloke. I became thirsty for more knowledge and attended my first Bushmoot a year later and was invited onto the staff along with Johan two years after that.

Membership of BushcraftUK has allowed me to experience things that I had never thought possible, I have learned much and found many new friends along the way. I am thankful to Tony for his foresight in creating it and wish him every success with it as it grows.

I currently run Red Dragon Bushcraft and work part time in a local camping & outdoor shop, I teach with the Air Training Corps and am involved with the local Youth Club.

I live on a remote small-holding in Mid Wales with my wife and three children. 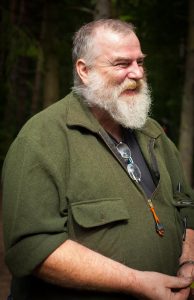