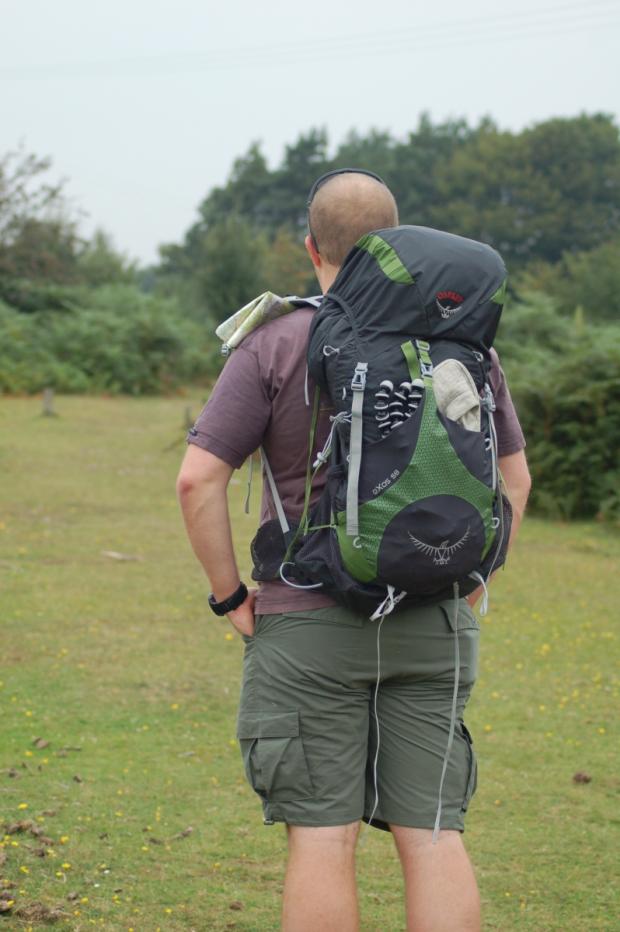 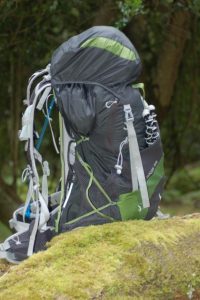 Review– There’s something to be said when a framed rucksack arrives in a box that’s actually heavier than the rucksack!

“Super Lightweight Backpacking
The Exos 58 is the go-to pack for active light-and-fast outdoor pursuits, thanks to our AirSpeedSuspension, which teams a 6061-T6 Aluminum frame with a 3D tensioned mesh backpanel, and side crescent ventilation. The AirSpeed suspension works in tandem with the supportive and ventilated Bio-Stretch™ harness and hipbelt. A compression system composed of superlight 7mm webbing rounds out the lightweight, innovative features on the Exos 58.”

At first sight the Exos 58 does seem to be a mass of straps and buckles and usually I prefer a slightly more uncluttered look, so when this pack first arrived I started looking for ways of reducing the weight even more. The trouble with this pack is that the closer you look the more you begin to appreciate the attention to detail that Osprey put into their gear and apart from shortening the straps at the base of the bag there is very little that I’d remove.

The Exos carries loads very well, I didn’t get to 18kg at the top end of the load range given by Osprey, but I did on a one day walk carry a 15kg load, mainly to test the bag. Weight is transferred effectively to your waist through the aluminium frame, and it wasn’t until I took the pack off that I remembered quite how much I’d thrown in. The AirSpeedSuspension system is good and I definitely didn’t get as damp as with previous packs. Two criticisms though is that where the rear mesh meets the bag at the waist belt it has developed an annoying squeak, making every step sound like I had a resident chipmunk, on longer trips this did begin to grate and at one point I thought my wife was seriously considering pushing me off of the hill. The other issue that I had is with a wire tensioner that is on the back system that keeps popping out, I’m not entirely sure what it does and I will probably remove it completely, however, it is so far the only weakness that I’ve found.

The waist belt is considerably cut down compared to other bags that I’ve used, but it was still comfortable as the belt uses a ventilated Bio-Stretch harness – that is foam with holes cut that is surprisingly comfortable considering the thickness. The actual waist straps are again much thinner than most other bags at only 20mm wide however the pack sits so well that the webbing didn’t cut in at all. Tightening the waist belt is actually a joy, the Ergopull system means that you tighten the webbing by pulling forwards instead of backwards, a more natural movement and because the webbing also doubles back it means the waist belt is stabilised at two points. There is a small pocket on each waistbelt which has proved useful for snacks, compass etc, the only issue is that sometimes the mesh will snag on the items as you’re putting them in/getting them out.

The zippered side pockets have been positioned further forwards than other backs which means they don’t interfere with the wand pockets on the sides, saying that, the side pockets do seem to boast technology that Dr Who would be proud of, one side manages to hold my Paramo waterproofs which are not renowned for their packsize! There is a large stretchable front pouch is great for wet gear or items in regular use and includes a drainage hole at the base and a compression strap at the top that is independent of the top strap.

The side wand pockets are generously sized and have been designed with a gap on the front that means you can remove water bottles etc by reaching behind without removing the pack, because of the bottom lip I had no issues with anything falling out of these. Osprey have also added the usual compression straps, but again with a slight difference, the straps are very thin at 7mm and can be threaded on either the inside or the outside of the wand pockets depending on whether you’re compressing the bag or holding items into the pockets. The straps are useful at reducing bag volume enough that this bag could realistically be used as a day bag, especially if the top pocket is removed. I quite like the idea of a removable top pocket if you are reducing the bag size, but it is quite fiddly on the Exos and although you can fit a strap to it, it wouldn’t be possible to use the lid as “grab bag”.

The main inner compartment is large and is easily large enough for multi day expeditions, there is a large elastic pouch for a hydration bladder complete with the usual openings for routing the drinking hose through, there is also a clip at the top of the bag for attaching the bladder so it doesn’t sag into the bottom of the pack as it empties. The bag is made of 70Dx100D Nylon Shadow Check which in use has held up well so far and has been fairly waterproof, even in heavy downpours the contents of pack remained dry.

Now if you’re like me and use walking poles a reasonable amount, it can get quite annoying when you want your hands back for a bit, I usually either take off the pack and attach to the gear loops or slide them down my back. One feature of the Osprey that I really do like is the Stow and Go system, where there is an elasticated loop at the bottom of the pack for the pole ends and another with a draw cord on the shoulder straps that effectively holds the poles under your arm and out of the way. I did wonder when I first saw this if the poles would get in the way here but it actually works really well.
Conclusion
This has been the first Osprey pack that I’ve used and I’ve been very impressed, comfortable, light and with excellent attention to detail! 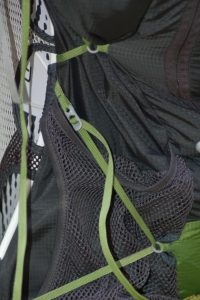 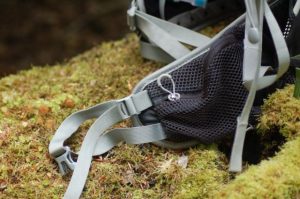 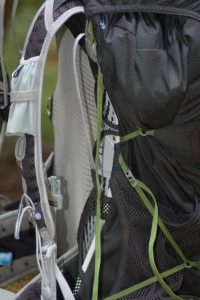 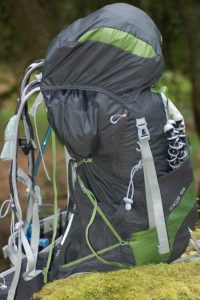 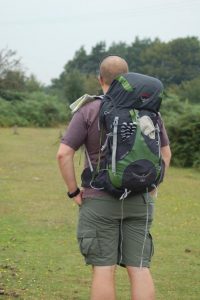 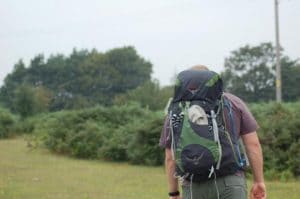 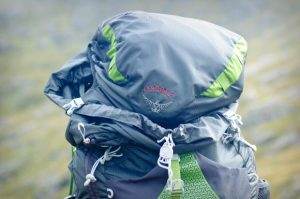 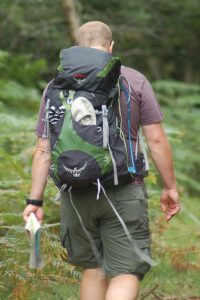 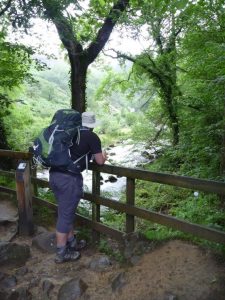 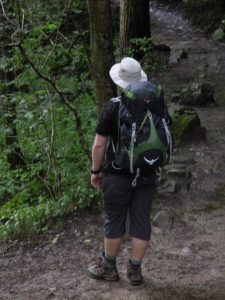 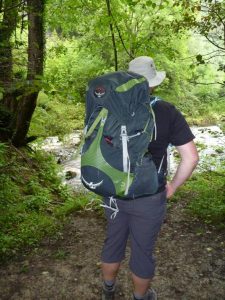 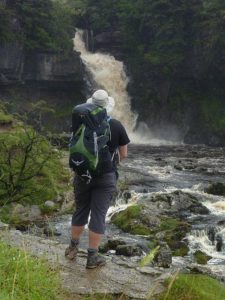 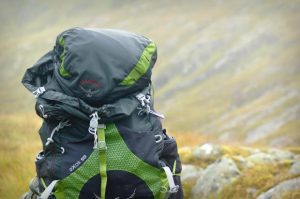 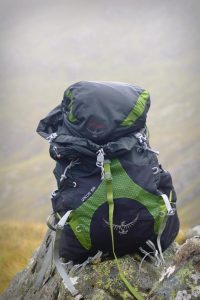 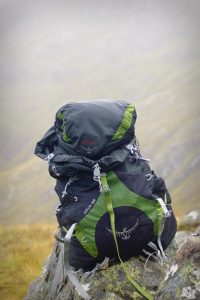 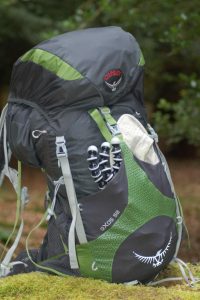