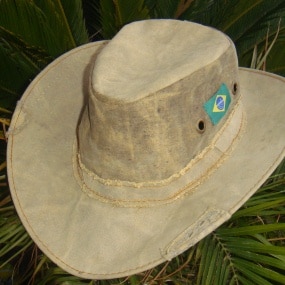 Review – My first impressions of the Tarp Hat were that it’s a cool hat, it’s made from truck tarps that cover loads traveling through the Amazon, and looking at it you can imagine where this material has been; they’re as individual as can be and feel like they can stand up to a good battering.

The question though, is it worth £20?

Manufacturers Description & Specification
They are made from recycled tarpaulins from open cargo trucks that run from the north westAmazon to the south of Brazil along thousands of miles of unmade red dust-laden tracks with rain, sun and dust aging the material in a way that no factory could ever replicate.

The material is washed and prepared ready to be made into “probably” the best original Brazilian tarp hats around. Each hat has seen more weather than most of us might see in a lifetime, and do not need any looking after. They are always ready for their next job of keeping the elements off you, whilst looking rather cool at the same time.

They are fantastic hats for the garden, trekking, walking, on the boat, and for general outdoors work; you think of an activity and they will make you look and feel cool.

They are waterproof, sunproof, sandproof, and in fact hats they will look after themselves and you. Each hat is individual with no two being the same. Some will have repair patches on, while others will have stamps or writing on. This all adds to their charm, and they are as individual as all of us…no mass production here.

I like this hat and I’ve worn it quite a bit since it arrived a few months ago. I’ve used it in rain, sleet, and sun, and in the wind. But we’ll get to that in a minute.

This hat will keep your head dry; it’s got quite a wide brim that’s reinforced with a wire edge so you can reshape it to whatever you want or after it’s got mashed a bit you can return it to its original condition.

The Tarp Hat is well made, all the stitching is neat and clean, and on the review sample it contrasts well with the colour of the hat material, a dark sandy colour in this case. I think it’s fair to say that this hat will last you years. It’s not a Tilley hat, but it does not pretend to be one, and obviously the price and style reflect its separate lineage.

I’ve found the fitting slightly on the large size, and although there’s an elastic rim around the inside that helps the hat sit in place, it does blow off quite easily. I’ve been in the woods and out and about, and it’s had a tendency to slip off when I’m bending over or when it catches on something. Another consideration is that I need to be careful what jacket I wear with the hat, as the collar can interfere with the rim and cause it to work it’s way loose on my head.

There is a ‘Hat Wind Strap’ that can be purchased as an accessory that would probably alleviate the blowing-off issue. If you ordered one with the hat it would just cost £4, although many of you could make one for yourself with little difficulty.
I would have liked it to fit a little more snugly, but that’s a personal thing. If my head was an 1/8th of an inch bigger it would probably be perfect, but this isn’t an issue for the manufacturers, rather a cause for us to make sure that we get the sizing right when ordering. Saying all that, it’s not a big issue or I’d not be picking this hat up over others I’ve got when I’m out and about.

The depth of the hat is good, allowing you to get it on properly. Some hats I’ve tried in the past don’t seem to have enough height inside the hat to get it on your head, but the Tarp Hat is fine.

It’s surprisingly light for a large hat, so you get good protection from the rain and sun while not getting neck strain. I get hot easily, and I’ve found that the Tarp Hat vents well through the pair of holes on either side and the trap material itself. It can get sweaty, but that’s to be expected when it’s hot and you’ve got something on your head. It’s never become uncomfortable though, so it’s a hat for all climes.

Conclusion
If you want a fairly unique hard-wearing hat, then the Tarp Hat has got to be worth considering; it’s good value, good-looking, and its origins make it a great talking point. I’m even thinking about getting the baseball cap they sell made from the same sort of tarps… 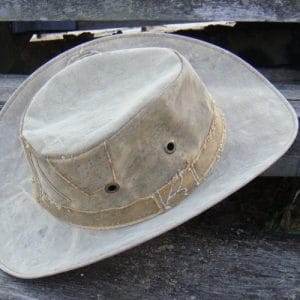 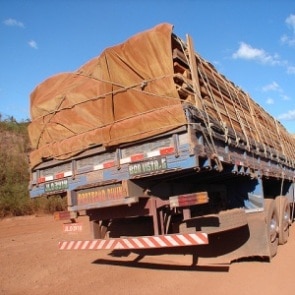 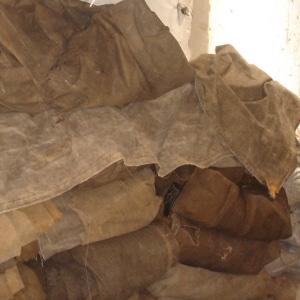