I have already explained the bow drill process, which can be seen in the accompanying photos. Aside from being used as tinder, certain polypores can also be used as hearthboards (see photos). Compared to other esoteric hearthboard materials (rock, shell, antler, bone) that I have used, shelf fungi work better by far. These polypores have generated coals in conjunction with a wooden spindle: artist’s conk, red-belted conk, birch polypore and tinder fungus. Casual observation indicates that these fungal hearthboards produce hotter, longer-lived embers than those derived solely from wood. 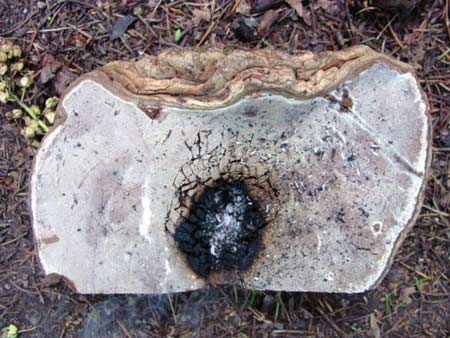 In general, the amount of effort required to produce fire by utilizing shelf fungi as hearthboards and tinder is less than that expended using wood. I suspect this is the case because shelf fungi can dry out more quickly than wood, since the pore layer (from which the mushroom’s spores fall from) provides a conduit for the quick evaporation of moisture. One might also consider the diet that certain members of this mushroom family enjoys. As shelf fungi infect the trunk of a tree, it either digests cellulose (the substance that plant cell walls are made out of), leaving a brown rot, or cellulose and lignin (the glue that holds plant cell walls together), creating a white rot. I’ve had more success doing bow drill and hand drill on species that digest cellulose and lignin to produce a white rot (e.g. red-belted conk). Cellulose is comprised of glucose molecules linked primarily by glycosidic bonds. When metabolised, it decomposes into fatty acids, which are said to be volatile.

The hand drill (see photo) is structurally similar to the bow drill, but the bow and hand-hold are replaced by your strength. Bearing down on a longer, thinner spindle requires more stamina and power in order to achieve a coal in this manner. However, the intrinsic mystical simplicity of “rubbing two sticks together” and creating fire, without the technological evolution of the bow, strongly endears me to this method of friction fire. To date, I’ve only used the artist’s conk as a hearthboard successfully with hand drill. How amazing it would be to drill an ember on a shelf fungus while it remained attached to the host tree!

Boiling Water On the Bush Stove 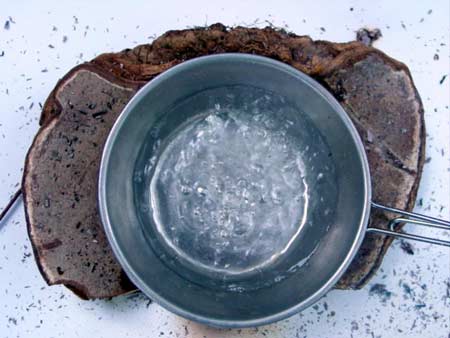 Before the match was invented in 1826, flint and steel was the prevalent method used to start a fire. Taking a piece of flint, quartz, pendantlite, marcasite, or other hard iron pyrite, one can strike a piece of these minerals against a high-carbon steel (e.g. a file or older knife blade). The mineral tears off small particles of the metal, causing these pieces to heat up and hopefully land on dry tinder (mind your aim!). Traditionally, a char cloth was used to catch the hot sparks. Char cloth can be made by burning a piece of cotton fabric while it lay inside a reasonably air-tight container. The cloth blackens as it burns incompletely and readily catches fire when introduced to an intense heat source.

There may be ways to primitively craft an easily combustible, charred material, but one can turn to the gastronomic workings of the fungus gnat larvae for an effortless flint and steel tinder alternative. Probably anyone who has left dried conks in a bag for months can attest to the ravages that hidden insects can inflict on a poor, defenceless polypore and the subsequent powdery debris that settles to the bottom of the bag. Recently I collected some dried sulfur shelf (Laetiporus sulphureus) fungi that had enjoyed protection from the elements by growing on the underside of a large, slightly elevated log. I was demonstrating flint and steel to school groups at the time and thought these specimens could prove useful. After storing the sulphur shelf in a basket for a while I noticed small piles of whitish powder accumulating on the floor. Upon inspection I discovered small holes running through the fungi (and many more fungus gnats flying around my place than usual). Thinking that this powder might burn, I cranked out a few hand drill embers and placed them on top of the powder. The embers steadily engulfed the new fuel, extending the lives of the coals (hence the oft-used term in primitive circles, coal extender).

Considering this success, I wondered if the sulphur shelf, in its whole, intact, unprocessed condition, would catch a spark and grow a coal. Well, not only did the sulphur shelf catch sparks easily and burn quickly, but blowing on the polypore and even smothering it would not put it out—I found this out by discovering the extinguished (not!) fungi fully engulfed in flame on my front steps 20 minutes after I supposedly put it out! Only dousing it in water would lay the fire to rest. Tinder fungus and birch polypore also work well in this manner. It was very satisfying to have a nine-year-old girl from inner-city Seattle successfully make fire with flint, steel and sulphur shelf later that week.

The Author With Red-Belted Conk and Hemlock Varnished Conk 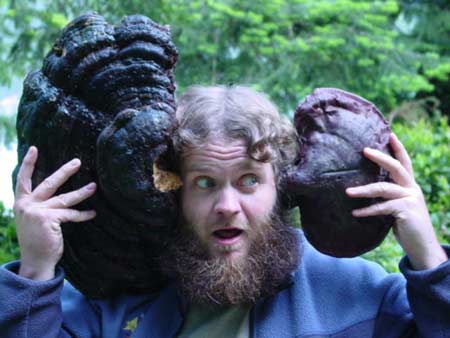 Polypores also generate a by-product that is useful to these efforts. White and brown wood rots can be ground up and applied to a friction-fire generated coal in order to extend its life, giving a person more time to construct a tinder nest in which the coal will hopefully be blown into flames. Wood infected with brown rot burns slow and doesn’t create flame by itself. Preliminary trials that I have conducted show that brown rot is more effective than white rot as a coal extender.

When an ember is placed on a chunk of white rot, the wood bursts into flame. Perhaps some of you can enlighten me as to why this might be the case—I’m not up on the specific roles that cellulose and lignin play in the combustion of wood. This has important foraging implications in primitive or survival situations. We get 92 inches of rain per year here, and up to 160 inches just 50 miles to the west. Imagine yourself in such a wet environment, in need of a fire. You are searching for dry fuel—all wooden surfaces in the forest are useless. But dig into a log, especially a rotten log (which is infinitely easier to dig into), and pull out some fluffy, dry, punky, white wood…congratulations, you’re warm!

Even the pore layers of shelf fungi have a luminescent use. If you look closely at the photo of the stone oil lamp, you can see the brown lump of a wick that sits in the fuel (be it rendered deer fat, asphaltum or olive oil). This wick is a piece of red-belted conk, whose pore layer siphons the liquid fuel into the flame that dances atop the fungal mass.

Lastly, we come to the conk stove. Simply place a burning coal on top of any large conk and watch the fungus slowly become engulfed in flame. Better yet, procure a piece of hollow elderberry or bamboo stem and blow gently on the burning mass, and watch the fungus quickly become engulfed in flame. Then set a pot of water directly on the conk and voila, it boils within ten minutes.

I hope this article has warmed you to the possibilities of extending your love for primitive skills toward Kingdom Fungi and discovering their role in our pre-historic relationship with our environment.
There are many ways to attach a handle onto tools. Wanting to expend the least amount of energy possible in stone age endeavors, I use vast amounts of energy experimenting with various techniques. Some work, others would work (if someone else performed them…). Here’s one method that I prefer because, well, I have little command of carpenter-ic common sense, a weak grasp on thinking and planning ahead, and little patience for crafting fine notches that snugly, custom-fit a randomly-contoured stone blade.

It all begins with The Stick. I chose a hank of Big Leaf Maple because it is soft and therefore easier to split with stone age tools.