Even I banished the instant noodles for this trip in favour of some proper bush pot cooking, peeling vegetables and making dumplings for a couple of hearty winter stews.

Once again thanks to all that came to the winter or should I say Spring Moot. Bridgend did us proud. It’s much colder in Sussex tonight. 3C. 9 in Bridgend.

It was a great few days hanging in the hammock and meeting up with friends.

I’d love to hear what you think worked well and how we could improve future Wintermoots.

My favourite evening was spent under the main parachute with the light on,eating venison curry and chatting.

I’d like to see the format follow the Summer Moot a little more closely with a few winter themed workshops.

Maybe a morning gathering. An evening of hot chocolate under the main chute.

Sorry I missed all that lovely venison. Saw it hanging there then had to head for North Wales.

I had a great few days at the Wintermoot and really liked the relaxed atmosphere.

I have put my pictures into a OneDrive album (click this link to see them all) but here are four from it.

We had a lovely time at the winter moot, too. My toddler made 4 new friends and ran totally feral every day.
Our feral toddler: 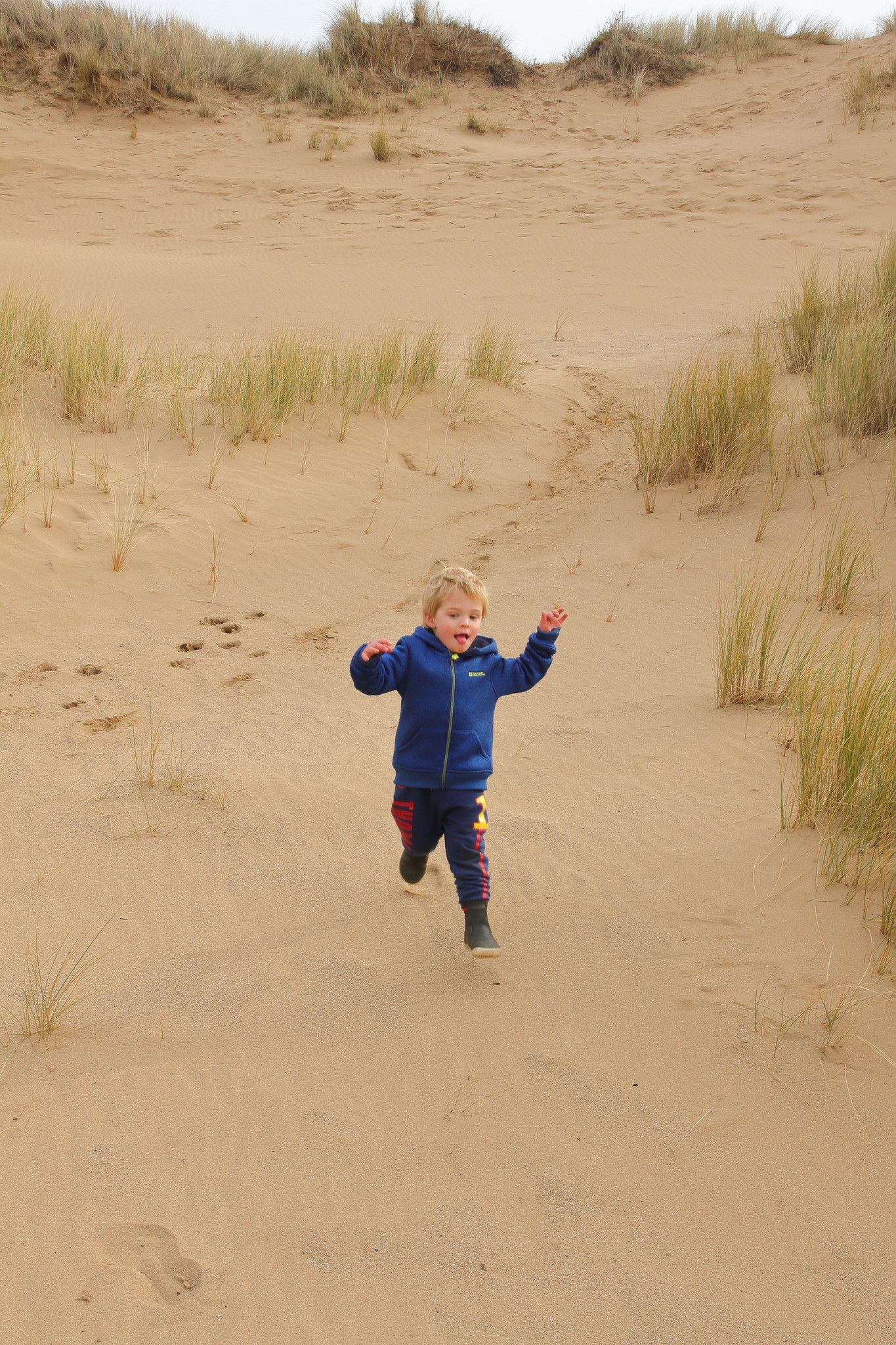 Walking on the dunes by Susannah Relf, on Flickr

I decided to take the cooking theme and run with it, so attempted the following menu, and we stocked up on sacks of charcoal to make it easier to build embers to cook on as well as bringing our great big heavy dutch oven:
Monday
Spaghetti bolognaise with garlic bread
The bolognaise was straightforwards enough, but the garlic bread posed a problem. I tried wrapping it in tin foil and cooking it over some embers, but it turned out burned in places and undercooked in others. Luckily, camping makes us hungry.
Tuesday
Pork casserole followed by ration pack pudding
This is a favourite easy meal, so no challenges here other than the time it takes to peel and dice vegetables.
Wednesday
Chicken and vegetable tikka masala with thai fragrant rice, peshwari naan, mango chutney and lime pickle. Thanks to George for the pickie.

The chicken tikka sauce came out of a pot, so that was easy enough to tip over our chicken and vegetables, then I baked the whole thing in the dutch oven. I learned a fail-safe method of cooking rice a few years ago, so that turned out well too. (One cup rice, two cups boiling water. Boil for 10 minutes, then leave it on one side for 10 minutes to soak up the rest of the water. Doesn't need draining and doesn't burn so easily). The naans were ready-made and I just heated them on the lid of our cooking pot.
Thursday
Pineapple glazed gammon shanks with potato and carrot mash and mixed green vegetables
https://drive.google.com/file/d/1tMmTfheJwMLhSCk4eR25LIHGSSghBQO_/view?usp=sharing
The pineapple glazed gammon shanks were Tesco's finest, so just needed cooking as per the instructions. This was fairly straightforwards, too, and very yummy.
Friday
Toad in the hole with mash and beans
https://drive.google.com/file/d/1oi56PwbxYJJVW4HZKvUhHRLq2CsPXDaU/view?usp=sharing
Flush with a week of cooking success, I tried something much more challenging this day...and my first proper failure of the week It was burned on the bottom and stodgy on top. I clearly have a lot to learn about using the dutch oven properly. I cheated with the yorkshire pudding mix and used shake-in-a-bottle pancake mix, so maybe that was a mistake. But I think the main problem was not having enough heat on top and around the sides of the dutch oven (and too much on the bottom!). Oh well - those hungry camp stomaches ate it all anyway!
Saturday
Take away chinese from the fast food outlets in Bridgend (because it was the last day and we didn't want loads of washing up!)

I have to say that, having attempted and failed with toad in the hole on the Friday, I was totally blown away by the venison wellington Andy made. Andy's venison wellington was totally beautiful - flaky crispy pastry, tender and moist venison and delicious flavours in the mushroom/red currant jelly/and-I-forget-what-else duxelle Andy had put around the meat. I had to look up "duxelle" - it's the flavoursome paste that goes around the meat, under the pastry. 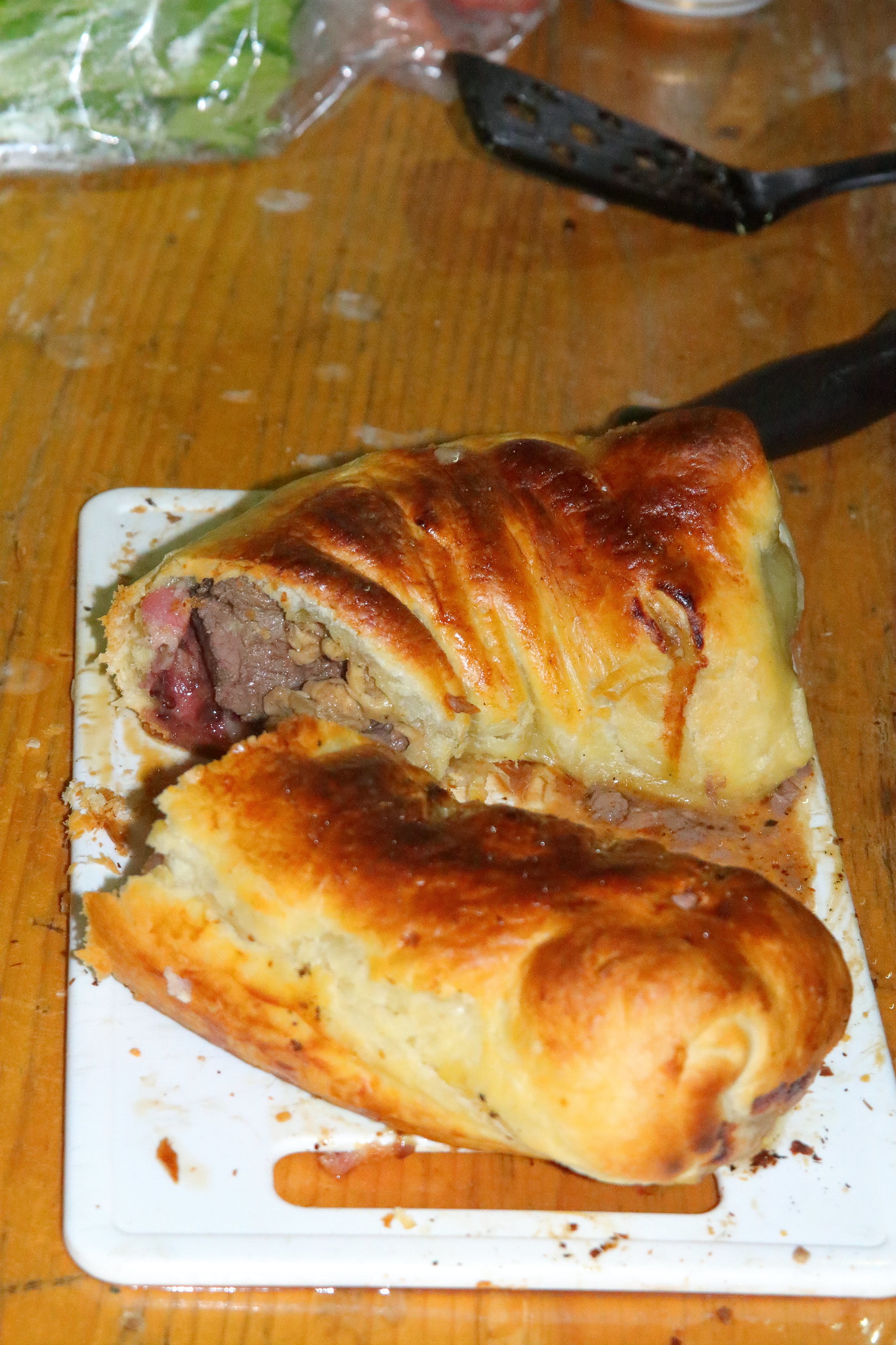 All in all, it was a fairly successful menu, but several challenges related to baking which I hope to master at the next winter moot!

Whilst I focused on food, there were plenty of other things going on, as always at the moots. We took part in butchering the deer, I managed to get my camera out and take some pics, we walked over the dunes to the sea and back, lots of time was spent boinging the children in a cargo net strung between the trees, Ian enjoyed a bit of tarpology, Ian taught me the Z-pulley technique for pulling on things, we met old friends and made some new ones and enjoyed the fellowship of kindred spirits. We didn't have time to fit much else in, due to having a two-year-old in tow, but there was a wealth of experience on site as always and opportunities to try things such as archery, air-gun, lock-sport and so forth.

Thanks to Tony for organising and making it happen!
Reactions: Seoras and Wayne

It's a little, but thanks for coming, it was great to see some familiar faces and also a few new ones. It was an excellent Moot. A big thanks to Wayne, Beth, Andy and others for the Deer and the cooking, it was brilliant!

What a great event. I decided to go back to basics for this one, so job number 1: make a bed

On top of the sticks was a blanket and a couple of hides, then the Czech bedroll and a couple more blankets on top. It was reasonably comfortable, but I think a sheepskin would have provided more padding than the reindeer ad by the end of the week both hips were a bit sore.
I only allowed myself to use flint, steel and charcloth for firelighting and no electric lighting
Other projects included making pine and rabbit glue for a blowpipe

And of course, food

And then Anne arrived and added (G)Root

BushMoot - the big get together Aug 15, 2021
Wehopeitschips
W