It's been a while since I posted a trip report, so here is one. Last December I made an attempt to locate two airplane crash sites on Kaaterskill High Peak in the Catskill Mountains. I made the attempt from the north side of the mountain, but was unsuccessful. You can see the trip report on my blog if you are interested.


This year, a few of the guys and I decided to give it another try from the south side of the mountain. It looked like the easier way to go because the starting point is about 1,200 higher on the mountain, which would cut off a full day of travel from the trip. The plan was to take a trail up the south side of the mountain. Surrounding Kaaterskill High Peak there is a snowmobile trail. We planned to bushwhack through the woods from the trail we were using once at the right elevation, to reach this snowmobile trail. Right off that trail we expected to find the first airplane crash site (#1 on the map). We would then follow the snowmobile trail for a bit to the southern section of High Peak. From there we would climb up to the top of high peak. There is a proposed trail there, so while not completed, we expected to see at least some indication of where to pass through the woods. That was my main concern because at about 3,400 ft, we would hit the spruce cap, and going through it without any semblance of a trail is very hard going. The second crash site would be tricky. There were reports that it is right at the top of the mountain (#2 on the map), so we could have seen it once we got there. There were other reports that it was further down on the north side of the mountain (#3 on the map), where I searched without success. If I had been alone, I would have bushwhacked down to search on the north side again, if we did not find it near the peak, but with the group, we planned to go down the proposed path until we reached the other side of the snowmobile trail. From there we would make our way out. 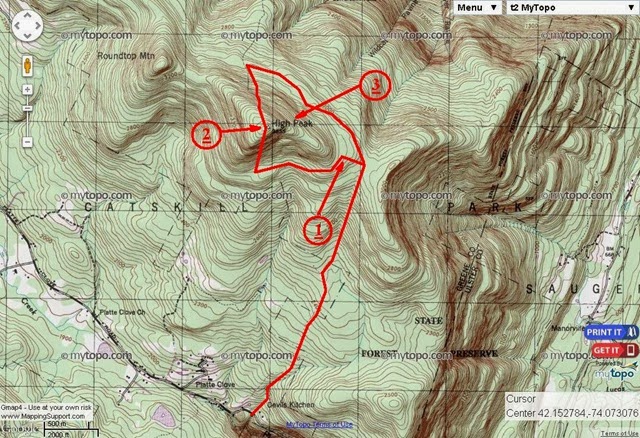 For this trip we had a sizable group. The usual guys were there, me, Rich, other Rich, J, and George. This time we also had James, Richs bother, and his friend, Vlad.


Once everyone had made their way to the starting point, we made our way up the mountain. The going wasn't particularly tough; just a steady climb. We had a few small streams to cross along the way. 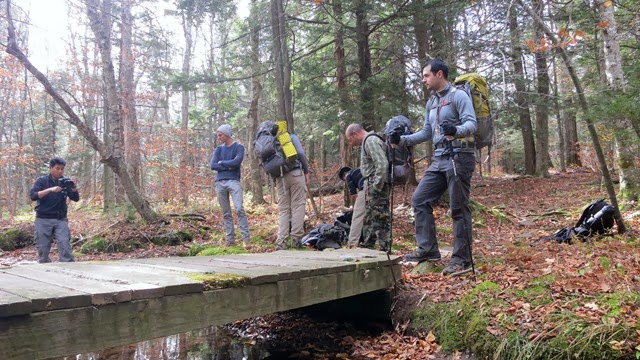 James had brought his camera equipment and show some video footage along the way. 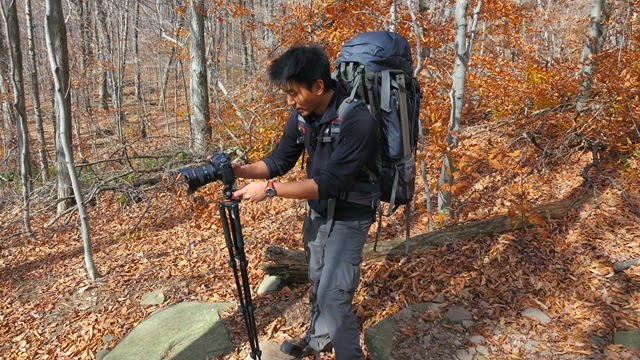 A few hours of steady walking and we reached the elevation where we had planned to bushwhack to the snowmobile trail. 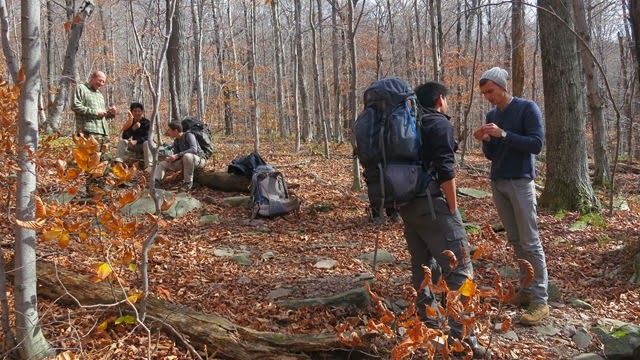 We were lucky, and it looks like others had had the same idea. There was already somewhat of a path through the woods, marked by a few rocks. We made our way through until we reached the snowmobile trail. From there we turned south, and soon after spotter the first airplane crash site, right off the trail. 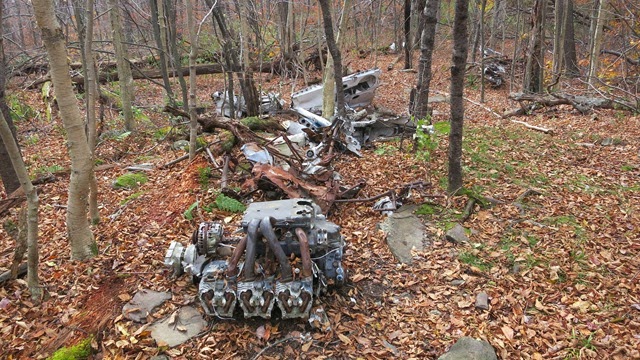 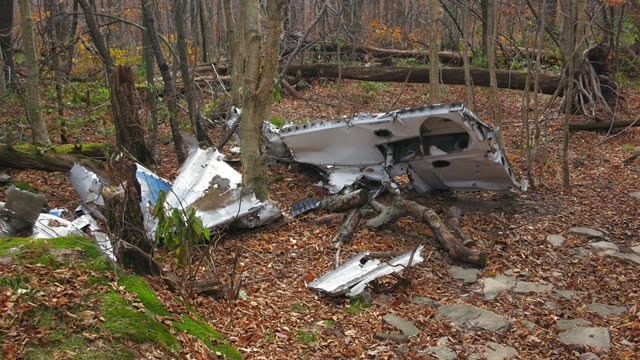 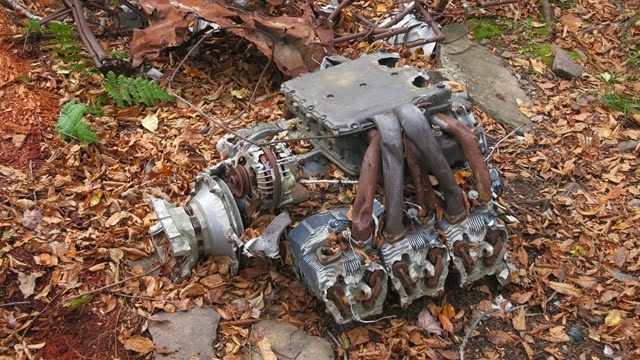 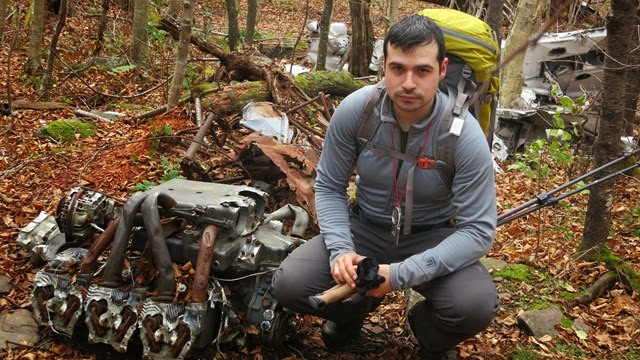 We decided its a good spot to stop for lunch. It was close to 1 oclock. We threw on our jackets and got some food. 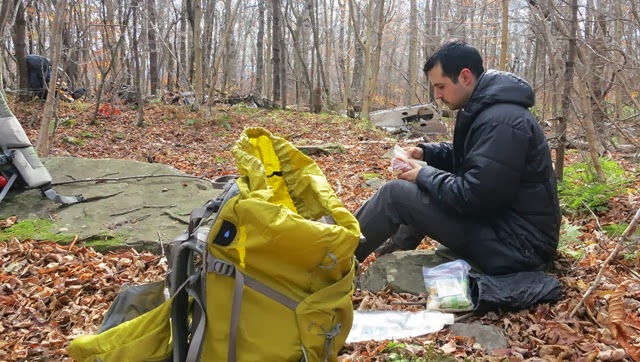 After lunch we followed the snowmobile trail for some time until we reached the southern side of the mountain. As I had hoped, there was a marker for the location where people had been making their way up the mountain, and somewhat of a path going up. 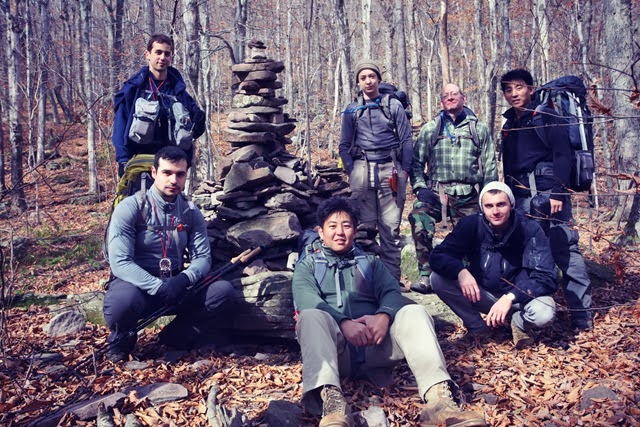 The way up the mountain was steep and difficult. On more than one occasion it was nearly vertical. 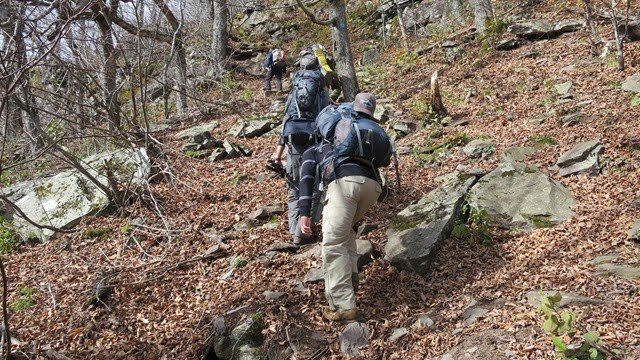 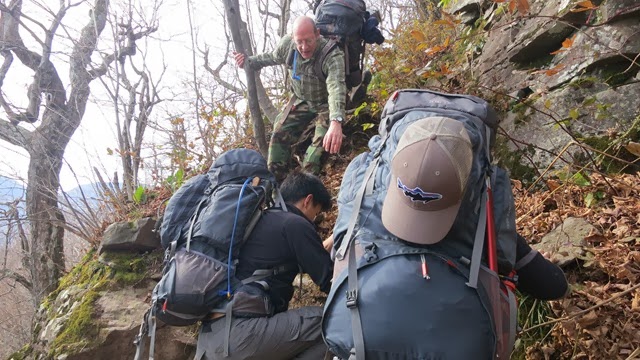 Halfway up the mountain, we reached a section that was extremely steep. We decided to split up. Me, Rich and J decided to climb directly up, while the rest of the guys went further west to seek an easier way up, which they eventually found. 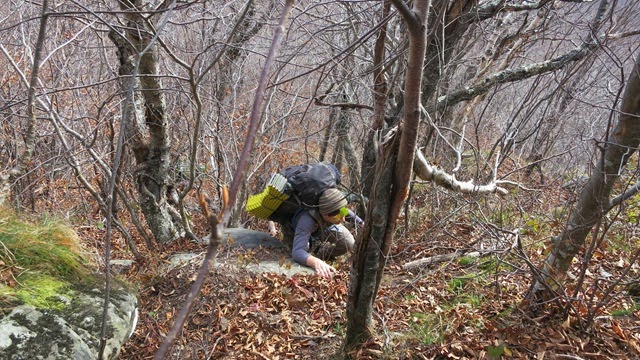 After a short vertical section, we reached a ledge that had been swept clear by the winds. 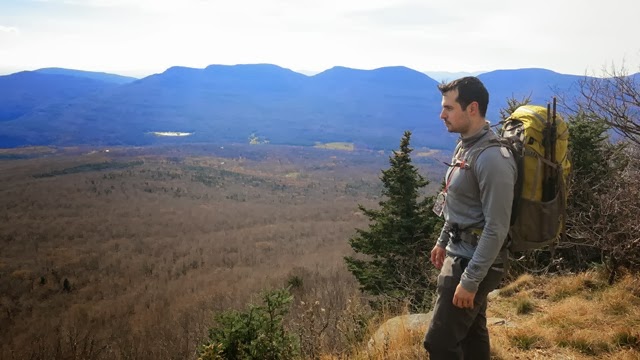 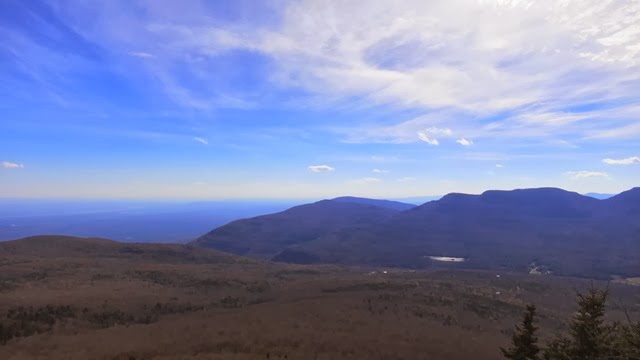 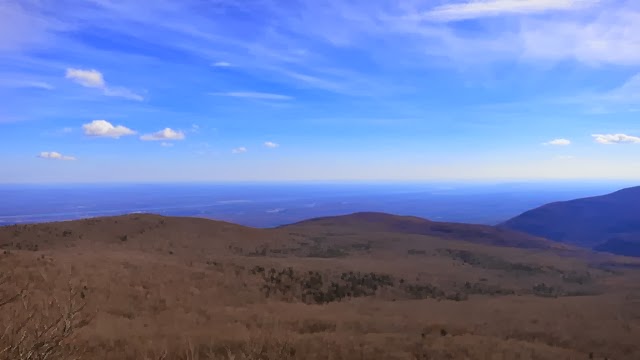 After a short rest, we continued up, quickly reaching the spruce cap. Fortunately, there was a visible path through the trees, which made the going easy. Soon we were at the top of High Peak. 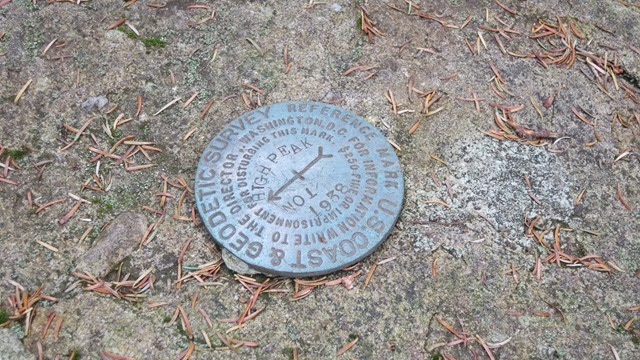 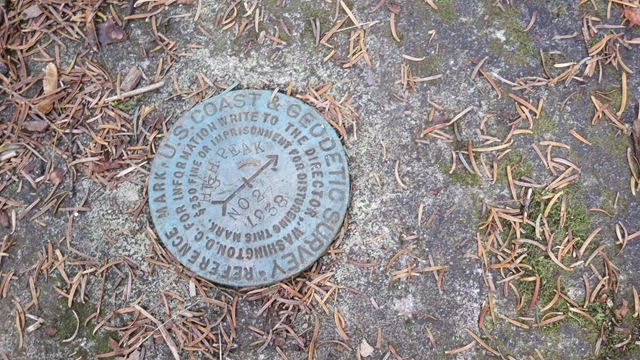 Right at the peak, we found remnants of the second airplane crash. It was nothing more than a piece of fuselage and a crank shaft from the engine. Clearly someone had moved them there. We looked around for the actual crash site, but could not find it. 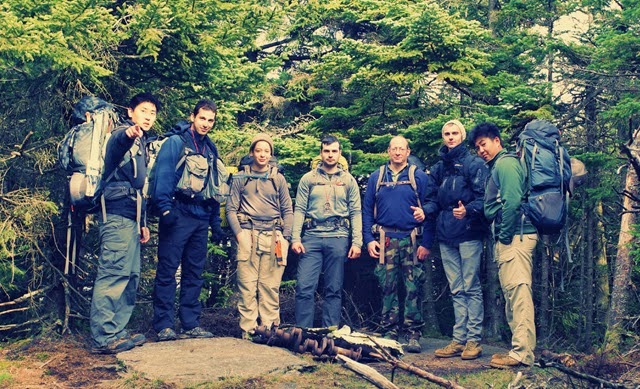 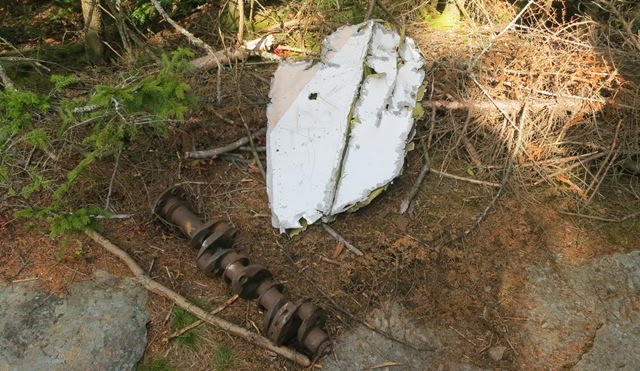 Without being able to find much else, we made our way down the mountain. The descent on the north side was easier. Eventually we got to the base of the mountain. We saw a small stream and decided to fill up on water. I was using the new Sawyer Mini Filter. It worked very well, although the design prevents me from using my usual pre-filter. I will have to figure out a solution.

From there we followed the snowmobile trail for a bit until we found a suitable camp site. Actually the spot we chose was right in the section where we had to bushwhack back to the trail that took us up the mountain from our starting point. 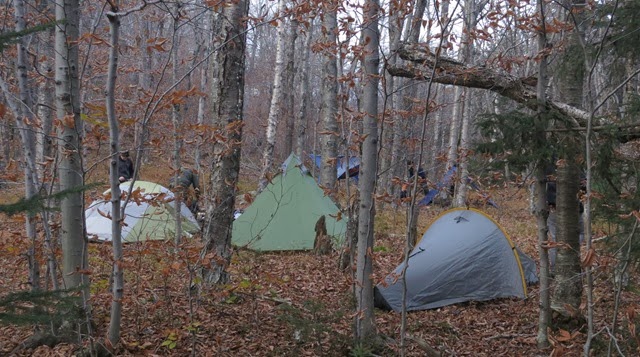 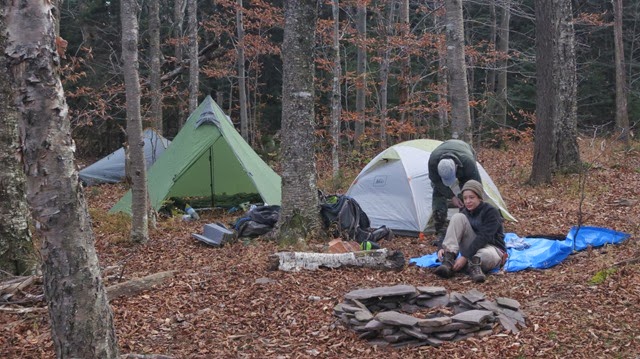 With a fire pit ready and wood gathered, we got the fire going. 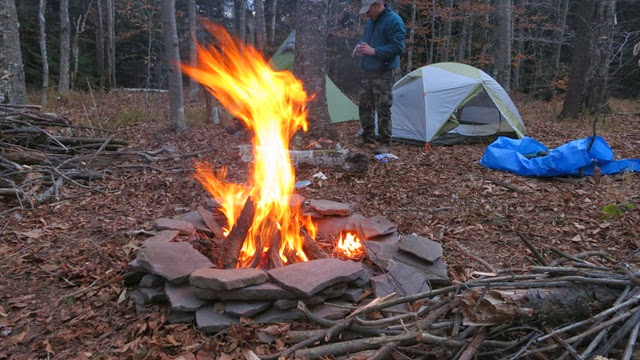 We spent the evening hanging out by the fire. The temperature dropped below freezing, and we started to get some snow. Fortunately, none of it stuck around. 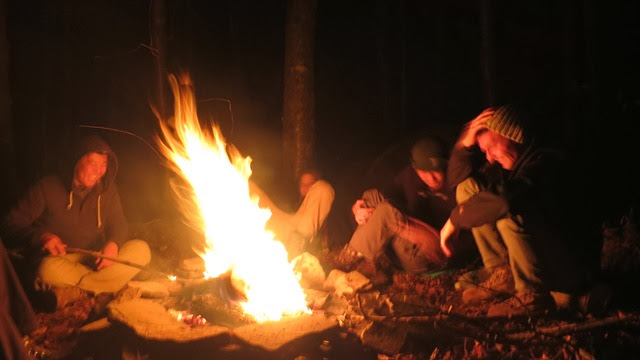 The night got pretty cold. It dropped down into the lower range of 20F (-7C). I had to wear my Patagonia DAS Parka in my 32F rated sleeping bag in order to stay warm. I had made the mistake of keeping my damp socks on, which made my feet cold.


In the morning, we got up, started the fire again, and ate some breakfast. 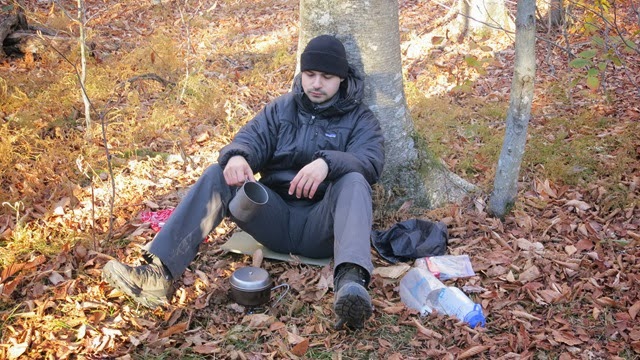 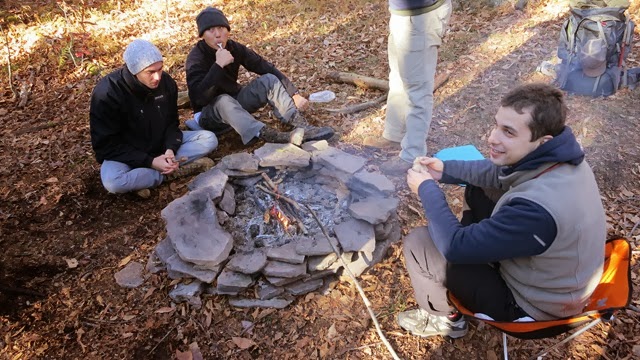 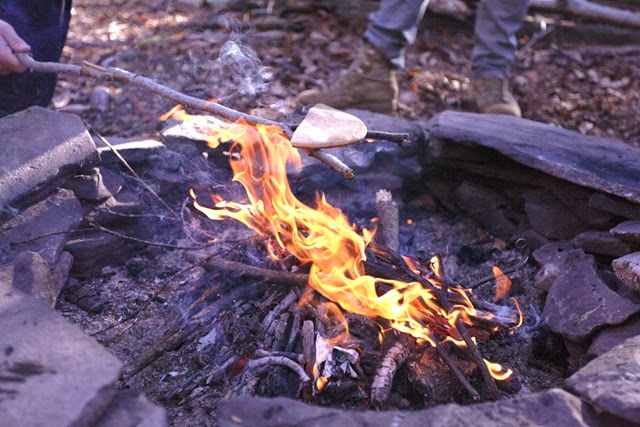 When finished, we set out again down the trail, and not long after, we were back at our starting point. The trip overall, was about 8 miles. Here is the GPS record. 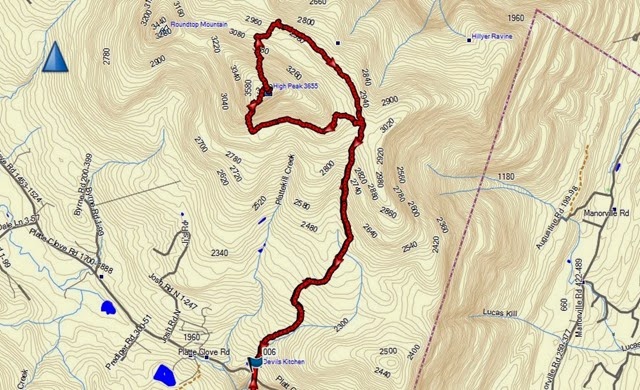 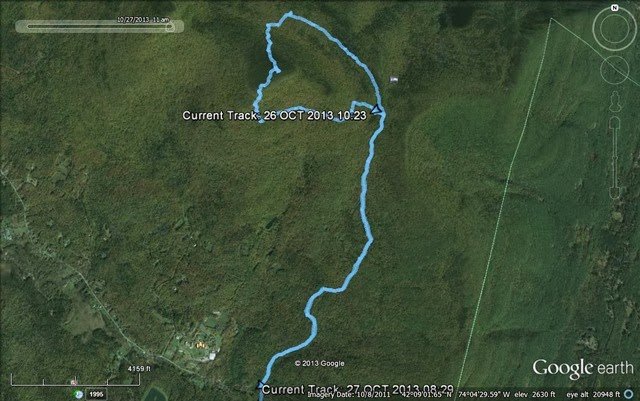 The trip was not difficult in terms of navigation because we followed trails most of the time. The terrain was tough, especially going up High Peak. We were all pretty tired by the end of the first day. We worked well together as a group, and got it done. It is unfortunate that the second crash site managed to elude me again, but I am definitely going to need better information on it before I make another attempt.

Great trip report, thanks for sharing.

Good stuff, thanks for sharing.

That's a really good report, Ross. Clearly written and interesting with some great photos. I hope you can get the info. you need to locate the second site and I'd love to see the resulting trip report............

Thanks for posting this.
D

Great report, thanks for putting the effort in.

Now I can't see it that well but is it a pushrod boxer six?

Enjoyed that thanks Ross

The plane crash sites I've visited over here always have an eerie feel to them, especially the WWII sites

Thanks guys. I have no idea what type of engine it is. It looks like a boxer six, but I'm not familiar enough with airplane agents to say with certainty.

Could be a Lycoming.6. They put them in lots of things.

Sent becauseif I hadn't sent it you'd never have read it. Maybe that'd be better, all things considered.

That looks great. We don't have any mountains covered in forest in the UK anymore ( unless anyone on here knows any different ), it was all chopped down and the mountains grazed hundreds of years ago.

I second what Rich said about crash sites being eerie though; I've visited some in the Lake District ( the one on Iron Crag being particularly desolate ) and I found one in Wales this summer, and I've never felt like hanging around in the area for long.

Cool trip and report Ross. It could well be that you found all there is remaining of the 2nd site, no doubt research will shed some light on it.

We've a few historic crash sites in my part of the world, most relate to the second world war era, one of which is a war grave as the bodies couldn't be removed with the resources at hand so were buried on site, this has seen some recent work to erect a new memorial;

A few more links that might be of interest;

Beinn Eighe (info for the plane crash, is under the header "triple buttress");
http://uk.ask.com/wiki/Beinn_Eighe

More recent was the loss of two US F15 fighters on Ben Macdui in the cairngorm mountains. This happened in the middle of winter in one of our more extreme weather environments, although despite the location and the season, the pilots were recovered and all wreckage was eventually removed from the mountain;

Cheers for posting enjoyed reading that and looking at the pics,always good to see stuff from other countries.