Unexpectedly this past weekend (two weeks ago now that I'm posting it here) freed up for me, so I decided to spend it in the woods. I've been very sick for the past few weeks so I haven?t been able to do any challenging trips. This past weekend was no different. I decided to go up to Bear Mountain, and visit one of the areas where I used to backpack a lot back when I was in college. Since the weather was warming up, my plan was to just bushwhack through the woods in whatever direction I chose. I wasn't going to cover a lot of distance, but this was the best way to stay away from people in the nice weather. So, I set out, bringing only my warm weather gear. 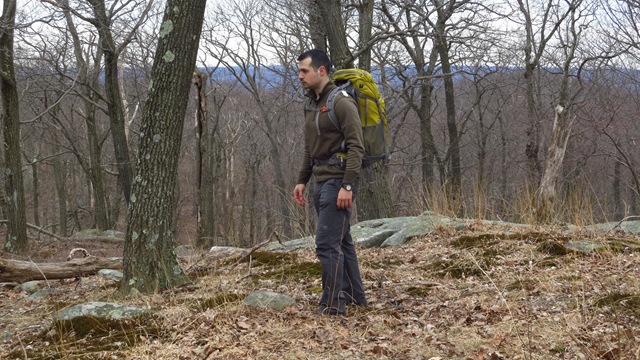 Now that the snow is gone, noticing animal sign has become much easier, and will continue to be so until all the greenery comes in. There was a lot of deer scat that could easily be noticed. That in the picture is probably a day old. 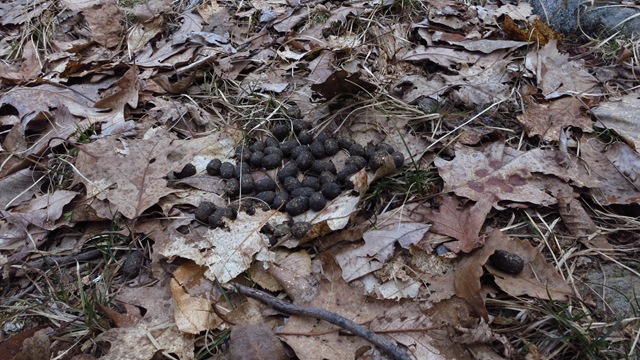 There was more throughout the area, so I decided to sit and wait for a while. Not long after I spotted two deer up on the ridge. I tried to get closer to them, but it was impossible to avoid making noise with all the dead leafs on the ground. 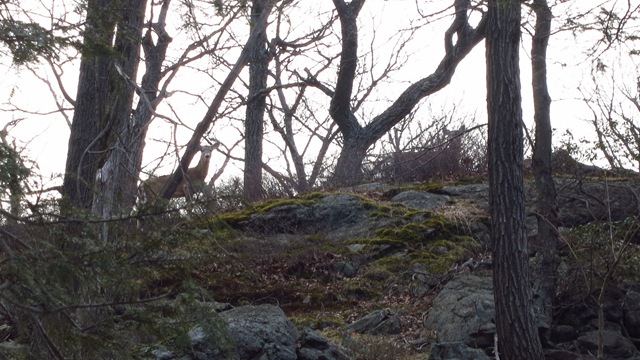 I kept going through the woods in no particular direction. Bushwhacking is easy this time of year at this elevation. There are no thick spruce trees, and the undergrowth is minimal. Eventually I reached a small lake. I figured I would stop for a bit, eat lunch, and cast the line a few times to see if I could catch anything. My hope was for perch or blue gill, but I had no luck at all. 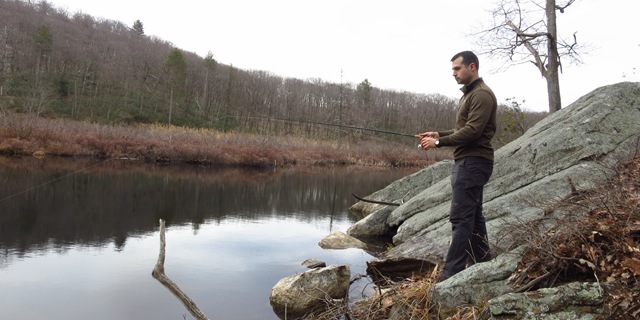 From higher up the ridge I could see some sign of beaver towards the middle of the lake. I didn't see any near the edge of the lake, at least in the are where I was fishing. 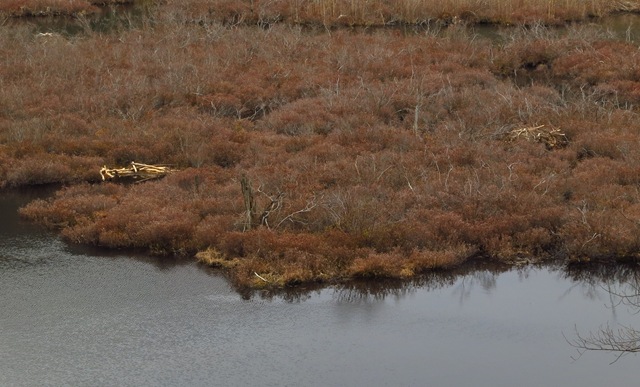 The downside to all this sign of wildlife is that the ticks are out as well. It wasn?t long before I spotted some making their way up my pant leg.


Eventually I got bored with fishing and got on my way. Spring is in the air, and so is sign of animals feeding. A bird clearly met an unfortunate end here. The knife you see in the picture is a Mora #2. 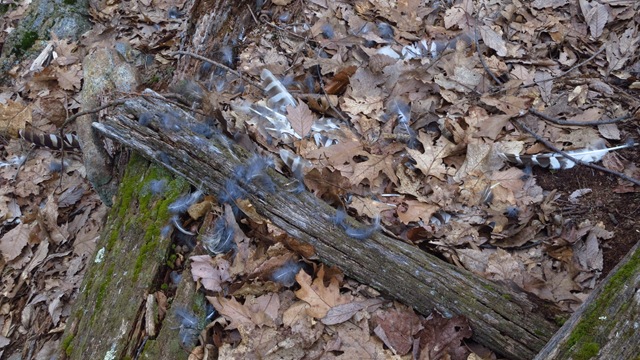 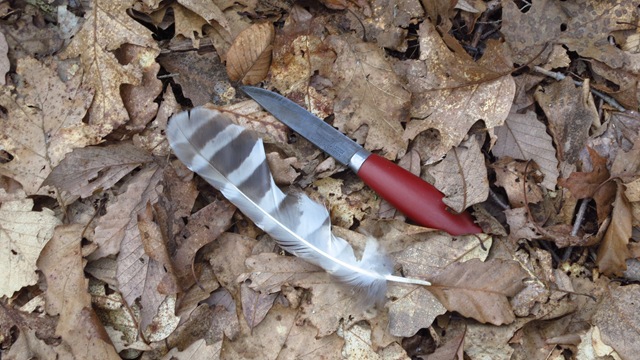 Eventually I reached an area where i figured I would camp for the night. Unfortunately, in this region, any level area is usually occupied by blueberry and huckleberry bushes. This time was no exception. I had to cut down a good number of them to clear out an area for my tent. I built a small fire, and since there was no fish on the menu I had some of my usual dried food. 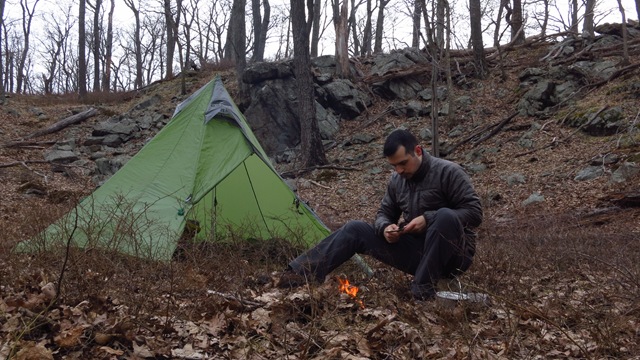 The night was colder than I expected, so I had to sleep with all my layers on. It wasn?t so cold that it bothered me though.


The next day I woke up, made some breakfast, and got on the way. I wish there was something more dramatic to report, but there was nothing. A trip over easy terrain like this one, during this time of year does not create the most exciting posts, although it was enjoyable none the less.


As a not eon gear, I have decided to use my pee bottle year round. It is just nice not having to get out of the sleeping bag, no matter what time of year it is. In case you are wondering, for a pee bottle I use a 1.5L Nalgene collapsible wide mouth bottle. It is easy to store when it is empty, and easy to aim into.


As I was walking back, I noticed the skeleton of a dead deer. 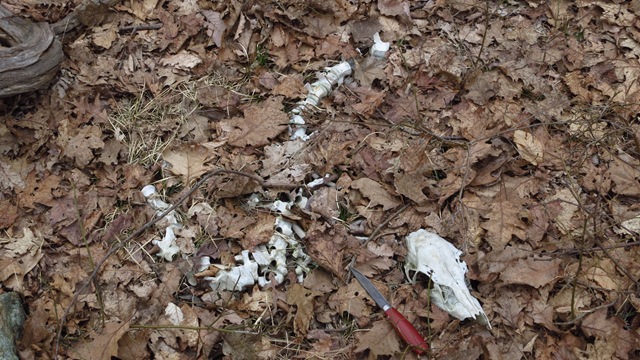 It looks like it has been there as least since before the winter. A few more miles, and I was out of the forest and back at the car. Despite the fact that the warmer weather is attracting more people to the woods, by staying off trail the entire time, I managed to avoid all of them, which is my goal when I'm in the forest. As soon as my health recovers, I'll try to plan some more challenging trips. Maybe I'll give that Kaaterskill plane crash site another try.

Coming from the UK, where the only dangerous animal is the, admittedly ferocious, killer hedgehog, I'm kinda wondering whether bears would be a problem on Bear Mountain, particularly as spring approaches and they might be waking up kinda peckish! And if so, what do you do do protect yourself against them?

Bears are definitely a problem. The most important thing I do to avoid them is to camp deep in the woods away from areas where other people go. Bears are smart. They go where the easy food is. That usually end up being the place where there are more established camps, or areas people go more often and inevitably drop food and garbage.

I'm also careful about not dropping any food, and at night I store it away from my camp. I know a guy who got attacked in that same area during the night because he had an apple in the pocket of his jacket that he was using as a pillow. Luckily the bear took the jacket and ran off, but not before tearing up the tent and inflicting quite a few wounds.
You must log in or register to reply here.
Share:
Facebook Twitter Reddit Pinterest Tumblr WhatsApp Email Link
Top Bottom