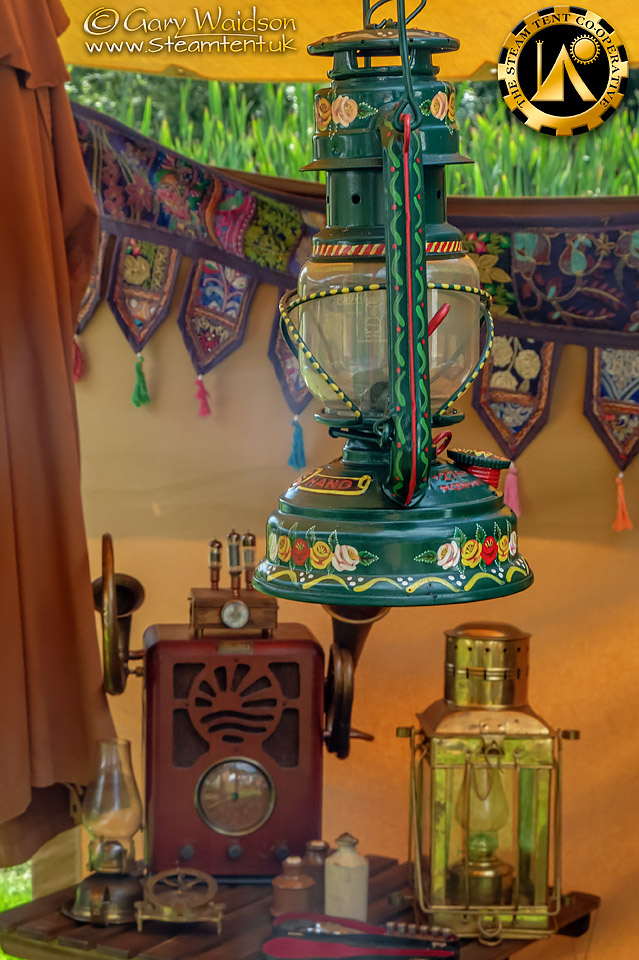 As a group, we are very fortunate in our friends.

Because so many of us have moved around in the different circles of outdoor life like Bushcraft and Re-enactment for so many years we have developed a good reputation that sometimes precedes us and leads to opportunities that might not otherwise have come our way.

Early in 2020 Roger Harrington contacted me about the Wilderness Gathering, a long established event run by and for outdoor enthusiasts.

Roger and I have moved in slightly different orbits, knowing about each other but not really getting the opportunity to meet up but he had been impressed by some of the pictures he had seen of what we do.

He wanted to expand the “Retro Camping” aspect of the Gathering and thought we might fit in very well.

After a quick phone call, we had some ideas put together and then someone ate an under cooked bat or something in China and everything got put on hold. Who says one man cannot change the world? 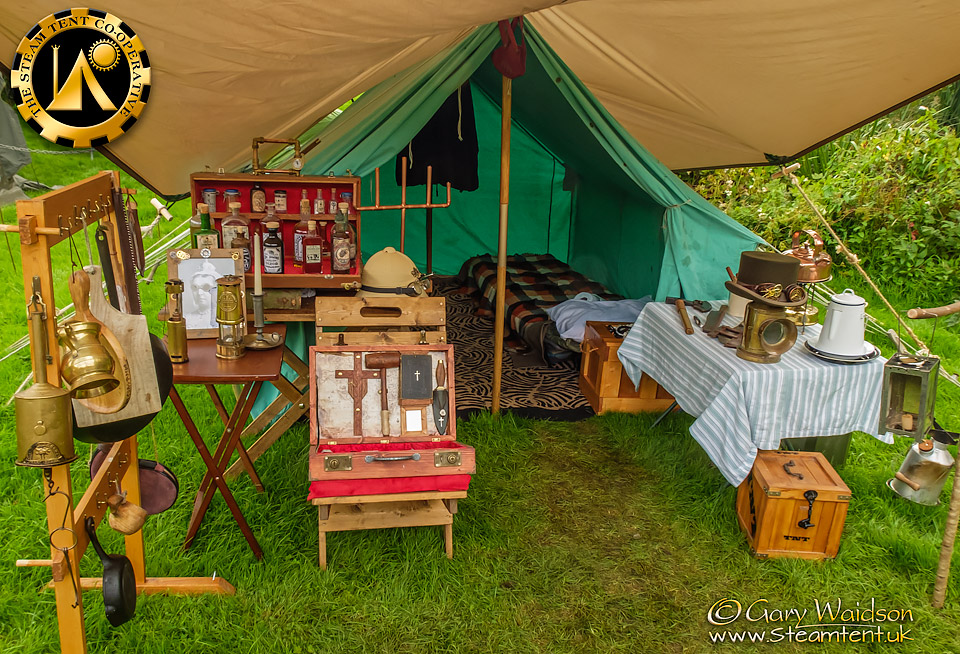 As things started to level back out, Roger contacted me again to see if we would still be up for doing something. I checked with Steve and Colin, veterans of the Blists Hill expedition, and we decided to see what we could do.

This would be a public event, quite different from what we normally do and we needed to fit ourselves into a limited space while putting on a good show.

Unlike "The Town that Never Was" which was a Steampunk event we had exhibited at before, this would be full of people that were more interested in camping and outdoor life rather than guesthouses and promenading in costumes. 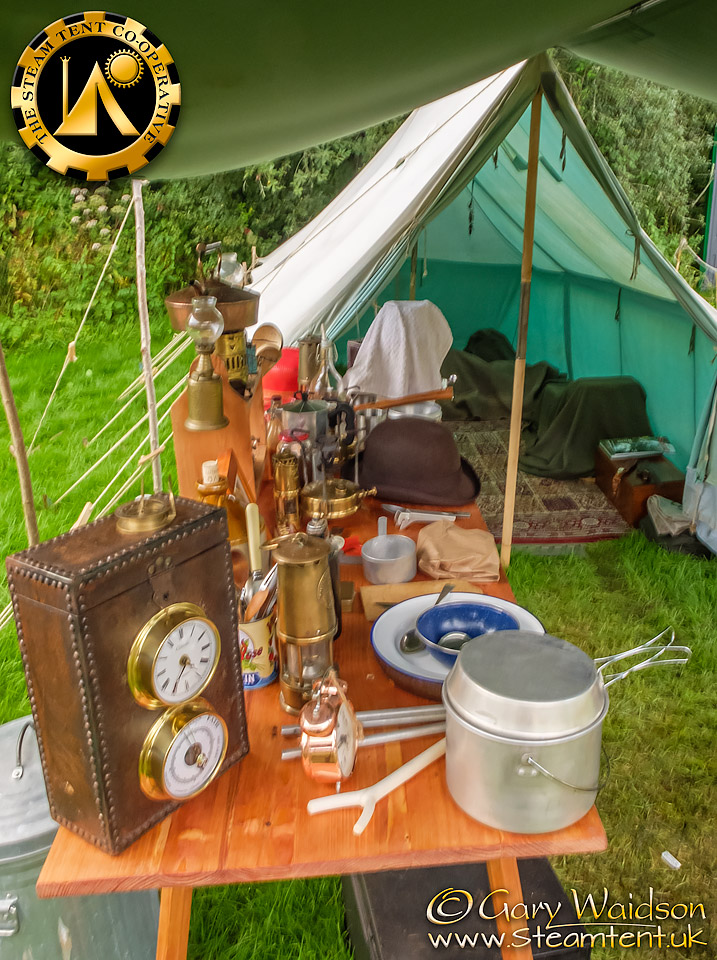 The area we were given was a prime spot, right on the main path from the camp site to the main arena providing a level of footfall that must have been the envy of many of the traders

There were a good variety of traders, demonstrators and people running workshops at the event and at first I think people were not quite sure how we fitted into that mix.

One of the most common questions we were asked was “how much is that?”, while pointing at some interesting object or piece of equipment.

We could probably sold the contents of the camp several times over and certainly have taken dinner reservations. 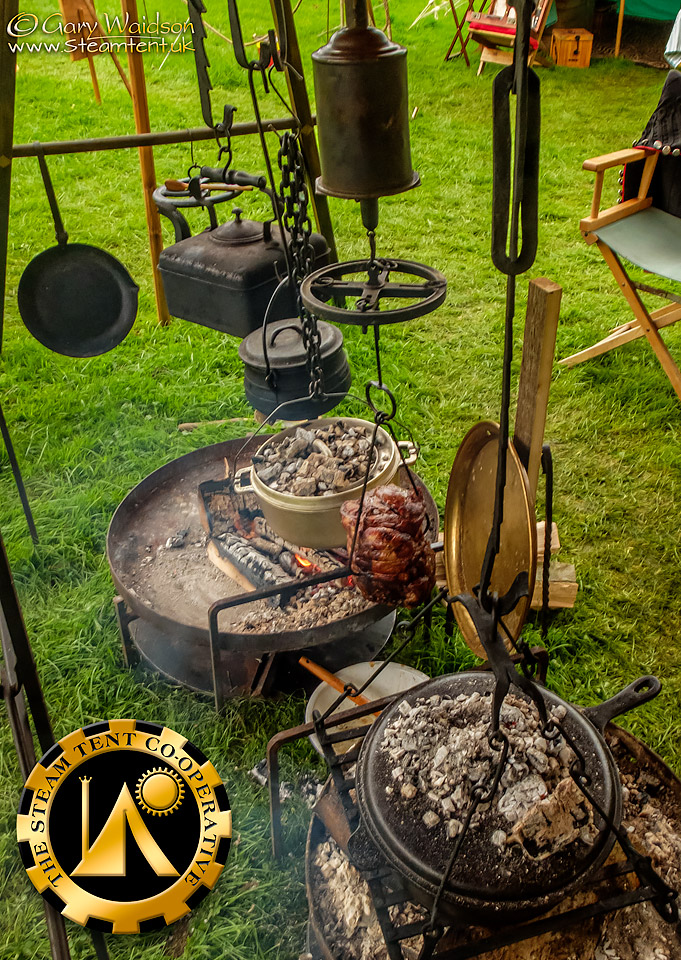 As is not unusual for us, the preparation of good food formed an important part of our display.

The meat turning on the bottle jack, lamb on Friday, beef for Saturday, with excellent fondant/roast potatoes provided by Colin and peach cobbler and pear crumble made by Steve, a pot of gravy each day was my humble contribution.

It’s so tough getting by on camping rations... 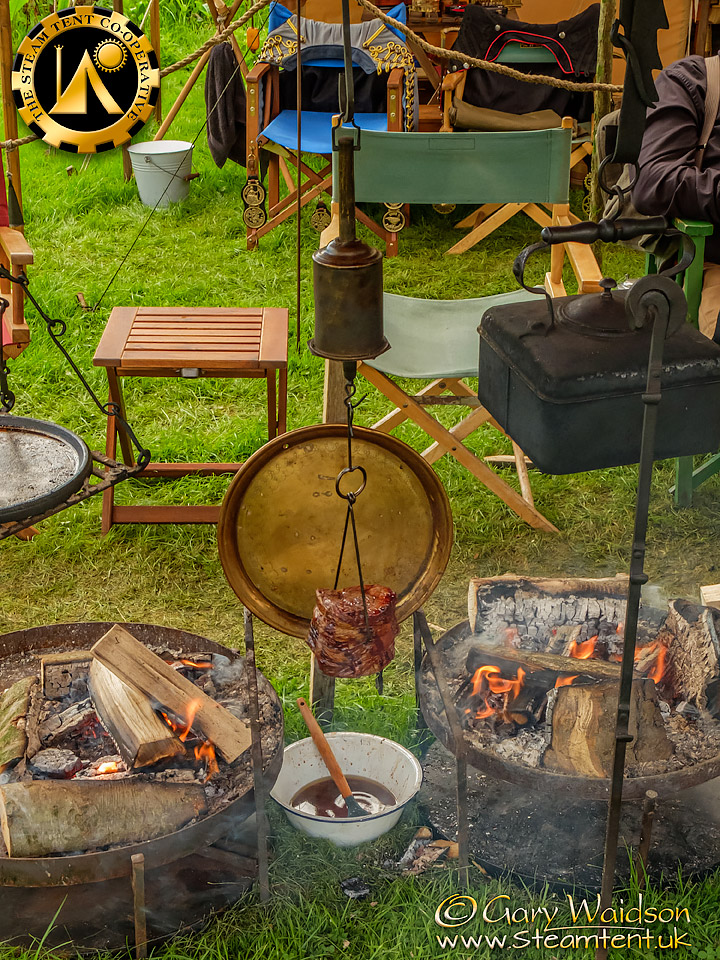 The cooking even attracted the attention of a well known food Vlogger who was delighted to be recognised by Steve, who regularly follows her channel.

Once people understood that we were not trying to sell them anything, most were fascinated by what they could see with a good few enquiring about where they could learn more.

Time will tell of course but I suspect we may well see some new members as a result. 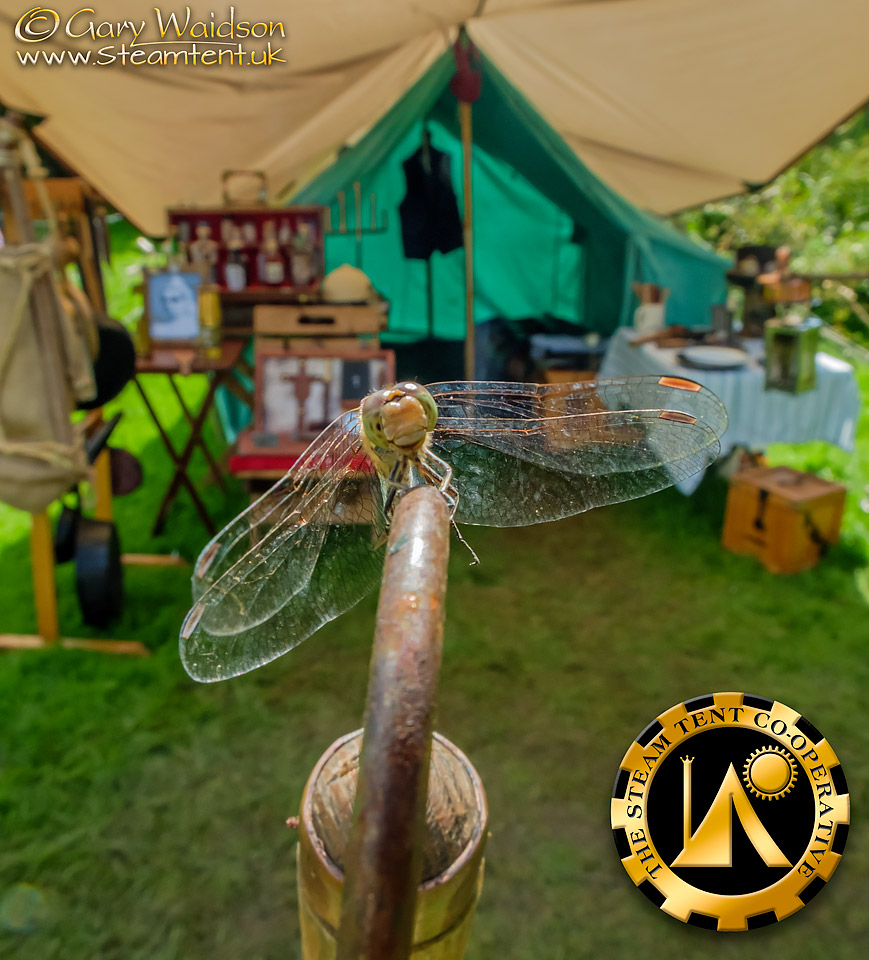 Not all of our visitors were human, situated next to the lake as we were, we had expected to be eaten alive by mozzies but an active squadron of dragonflies seemed to keep the bloodsuckers at bay. I think only one of us, Steve, had a bite in the end and that was not too bad. 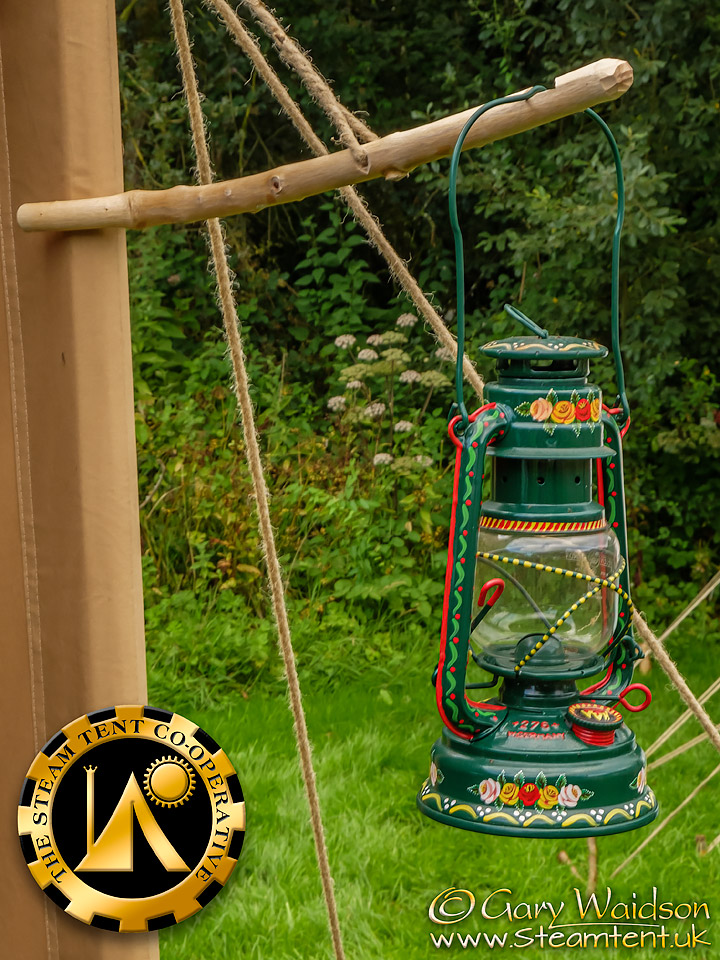 The bargeware that I worked on near the beginning of lockdown was very popular. Provoking many of the “How much?” questions mentioned earlier.

Once I had explained that they were not for sale but easy to paint, we even had a few people hurrying off to buy lanterns for themselves on the stalls that were selling them.

Our main objective of course, apart from enjoying the event, was to promote what we are up to and in that respect we had a very successful weekend.

Roger came to us on Saturday night and commented that he had received nothing but good feedback about our display and would we be interested in doing it again next year.

Our response was a hearty yes.

The question now is how do we up our game. Plans are, as always, afoot.

Great write up and photo's Gary. It really was an interesting and fun few days, and I'm certainly looking forward to next year.

Great write up as always and a very impressive display.
out of interest how long does it take to set up and strike camp?

Set up was about three hours to all under canvas and a couple of hours tinkering after that.

Strike took about four hours because we were tired by then.

It's certainly something you want to do when you have a few days to enjoy it.
Reactions: crosslandkelly and Wildgoose

I had a great time with Gary and Colin sharing with folks at the Gathering what we do and telling bemused folks that nothing was for sale. I lost count of the times we were asked that

Most enjoyable and great to meet you guys
Reactions: Wayland and crosslandkelly

Mesquite said:
I had a great time with Gary and Colin sharing with folks at the Gathering what we do and telling bemused folks that nothing was for sale. I lost count of the times we were asked that

JonathanD said:
I can see them. Put your specs on, or wipe the steam punk off ‘em
Click to expand...

Nope! Nowt for me either.

crosslandkelly said:
Nope! Nowt for me either.
Click to expand...

It was a permissions issue which has now been addressed.

Wayland said:
It was a permissions issue which has now been addressed.

Still nothing here, just a list of n.jpg numbers.

Interesting. I can see them on my iPad but not on this computer.

Those tents and a lot of the other kit is exactly the same as my parents used when they took me camping when I was a child. Mind you, then the kit was brand new!

I love the nostalgia, but it reminds me why I quickly developed my passion for lightweight, minimalist camping when I started camping independently. Couldn't fit that lot in cycle panniers or a rucksack!
Reactions: crosslandkelly and Wayland
T

oldtimer said:
I love the nostalgia, but it reminds me why I quickly developed my passion for lightweight, minimalist camping when I started camping independently. Couldn't fit that lot in cycle panniers or a rucksack!
Click to expand...

What they have is "wagon" based camping not back pack based. Interesting take on what it might have been or what it actually was. I don't know enough tell.

The pics are great though.
Reactions: crosslandkelly and Wayland

What you really need is a team of native bearers and a good gang master.

In the absence of those a small van seems to suffice.
Reactions: CLEM and crosslandkelly

Lovely to see you guys there and well done on putting on such a good show!

Oh, that's why you were so gruff with me; you didn't want me anywhere near your roast.

How very gracious of you...
Reactions: crosslandkelly
You must log in or register to reply here.

This is what it is like at Postgrad level....