TLM said:
I was using this when referring to sea levels. I guess though that sea levels do not necessarily show glacier edge activity and yes before melting they went back and forth, we have clear indications of that here. Glacier edge would have been a very inhospitable environment but sea shore probably had plenty to eat. In those conditions I would expect to find people there. That is just a guess though.
Click to expand...

Agreed. Just difficult to picture where sea shore would have been at that time.

I've seen illustrated maps of Doggerland at the glacial maximum, when sea levels were about minimum. It was a huge land mass with all sorts of rivers and (probably) lakes and marshes.

Same for the west coast of Canada. Sea levels were 100m below the present. Beringia was a colonized land mass. The interior glaciers forced the human population to the coast. The tide went out twice a day, exposing a feast of intertidal life. Very difficult to starve on the coast here.

Heiltsuk oral historians can pinpoint the location of ice age villages. One recently investigated was exactly where they said it was and some 14,500 years in age. Their cultural geographic heritage is secure. I met a "story-keeper" this year. I had no idea that it was a full-time, specific tribal job for someone selected for aptitude.

In river estuaries, salmon are trapped and harvested in their hundreds and thousands in big stone weirs. Parks Canada scuba divers have explored the estuaries out to 70' depths to see identical salmon weirs, abandoned with post-glacial rising sea levels.
Some modern geologists point to the island archipelago of Haida Gwaii and claim that the glacial melt was so fast that the village you were born in would be submerged by the time you died.
Reactions: JFW and Erbswurst 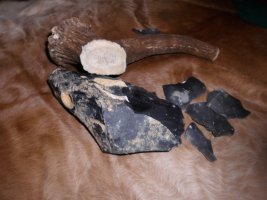 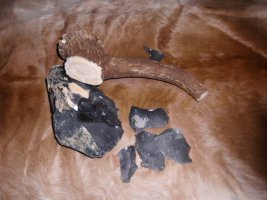 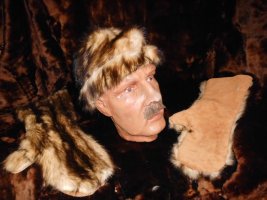 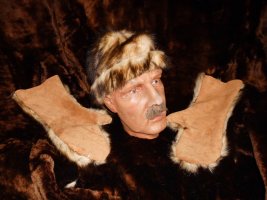 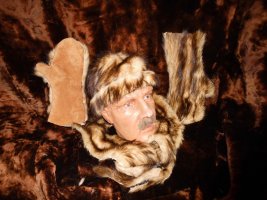 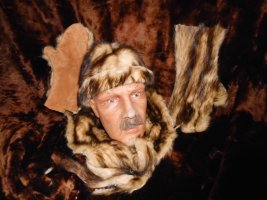 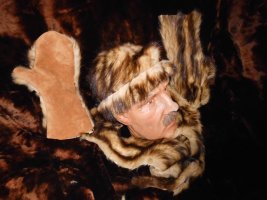 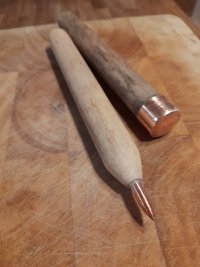 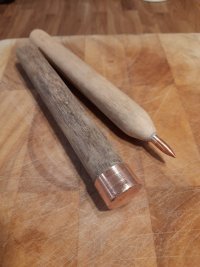 Nothing special but I knocked up a copper bopper and a flaker tonight. Used an old broken broom handle, a couple of lead catapult ammo, some 6mm copper rod and a 25mm copper end cap and some glue. Looking forward to having a proper go at it
Reactions: TeeDee

If you ever need big heavy lumps of copper for knapping old school soldering irons from carboots are a dirt cheap source.

Sorry for going off thread.

I see that all the fur is on the outside of the hat and gloves. Is that reasonable?

Outside in winter, inside in summer - as the Inuit and other cold country folk do it. Animals also have the rain shedding fur on the outside....
In severe cold then one layer fur inside under a layer of fur outside
Reactions: Robson Valley

Are you OK John, you’re not looking yourself…

Inuit have fur inside for insulation. I have never seen Inuit clothing with fur outside except for ceremonial stuff and trim. Gets wet too easy after the animals are all dead. Animal fur here is greasy, very hard to get them wet. Porcupine fur is disgusting and rancid/smelly when you try to sort out quills.
Reactions: punkrockcaveman

Google "Inuit clothing" and all the pictures are "fur Out", all references seem to state 2 layers one fur in one fur out...

A means of survival One of the critical skills that enabled pre-contact Inuit to survive in a harsh environment was the women’s ability to make warm clothing. The women had to clean the caribou or seal skins and then sew them into clothing every fall for each member of the family. There would be...

Maybe fur out for appearance but there's fur inside for insulation. Putting the insulation on the outside of my house is shere folly for out -20C windy winters.

Those are all dress clothes, not hunting and fishing clothes. Looks glamorous
but standing in a creek at -10C to spear salmon takes more than fancy dress.

All of my coats have all of the insulation inside a windproof shell, Two coats, I cannot wear above -20C. They are too efficient insulators. The insulation in my mukluks is all inside and they are fun to wear in sugar snow at -40C.
T

For some strange reason all animals seem to wear their fur on the outside. Works that way too.
Reactions: Erbswurst

True, it does. The animals have internal heaters, many simply quit in the cold and hibernate. Many migrate by the tens of thousands. You likely never experience those massive disappearances. I live in it. This is a really inhospitable landscape to live in during winter.

The sled-heads report that there's nearly a meter up top with 10-15 to go for an average winter.

The bears should go down in the next few weeks. Some den up hundreds of miles from their summer ranges. The cats are still out as are the wolves and coyotes and all the Mustelids. November fur from the trappers is absolute luxury as the seasons change here.
Of course, all the other big game will be out and about. They can adjust their metabolism (day length clue?) for poor forage for the next few months. Huge fines for harassing game outside of hunting seasons here. They need all their energy reserves for survival. Moose/elk/deer hides are damn cold with the fur outside.
Thanks, but I'll never take popular media observations. Instead, I want the insulation on the inside.

Fur is not only for insulation - it also sheds rain, ice and snow - hence fur trim on parks hoods
T

Robson Valley said:
You likely never experience those massive disappearances. I live in it. This is a really inhospitable landscape to live in during winter.
Click to expand...

I gather you are about on 53N parallel, I am living on 60N and cottage is 62N. While the climate is not continental we get the Siberian touch every winter for some while. I do see what happens when winter comes.
T

Winter garments of Lapps had fur on both sides, makes sense. Then one must remember that animals that live with winter have evolved (?) a fur that works in winter, at least two layers of different kind of hairs.
Reactions: Erbswurst

TLM Thank you. I was just about to ask how the Sammi (?) Lapps(?) dress for their outdoor winter activity.

I have no nearby oceans that might buffer the arctic air masses which sweep across western Canada with the jet stream. That polar air out of Siberia is unpleasant, isn't it? The Rocky Mountain range is my back wall. That keeps a lot of the severe cold on the east side.

I am better prepared and better dressed for the coldest times of our winters than ever before in my life. Layer after layer. My outer garments are all wind proof and all of the insulation is on the inside, like my house. Synthetic engine oil does not increase in viscosity with cold.

My neighbor has built a shelter of freight wooden pallets covered with a cheap tarp. His kids will have good fun all winter if we get enough snow to bury it.
He has a fire pit so they can even cook outside. 30cm snow can keep you quite warm all night.
T

Sami or Saami are a Finno-ugric speaking people that are the only group in Finland called "indigenous". It is not quite clear how accurate that is but they were the last to retain a semi nomadic life style. Reindeer herding is actually very late, started about 1700.

Lapps are people who live in Lapland not necessarily having Sami origin but not newcomers either. The present PC terminology changes daily but that's the gist.
Reactions: Erbswurst, Robson Valley and FerlasDave

I read somewhere that language to do with Reindeer was definatley non Saami.

its only recently that Tarandus has been studied seriously, -was it true they were domesticated twice?
You must log in or register to reply here.