Now I like a good cup of coffee on my breaks when out walking and have for years used a plastic "French Press" style cup (from Lakeland I think it was). Well I'm now in the market for something new and have spotted the MSR Mugmate which seems to fit the bill. Has anyone used one? Would they recommend it?

I use coffee bags from tesco, their own brand i think. Its basically proper ground coffee in a bag shaped filter. Very nice compared to cheap instant and easy to use without any extra kit, then just burn the bag in a fire.

Cheers Tony, unfortunately I'm a bit of a picky git when it comes to my coffee and I normally grind my favourite beans for cafettiere use, also I don't normally make a fire while walking so wouldn't be able to dispose of the bags that way (one reason why I've never made my own out of muslin ). I don't really want to go down the "another" coffee press type route either and was looking at the Mugmate as a viable alternative. Might have to wait until my trip to the US in June to have a really good look at one as there don't seem to be any local suppliers.

I got mine from Go Outdoors.

I can't make a comment (other than it seemed to be very slow) or recommend it as I've hardly used it.

If you grind your own perhaps try Turkish (or type) coffee?

Just need one of these:

But you must grind _really_ fine . No filtering, no milk*, sugar in before you heat ... and you can get pots with removable handles too!

Bhod said:
Cheers Tony, unfortunately I'm a bit of a picky git when it comes to my coffee and I normally grind my favourite beans for cafettiere use, also I don't normally make a fire while walking so wouldn't be able to dispose of the bags that way (one reason why I've never made my own out of muslin ). I don't really want to go down the "another" coffee press type route either and was looking at the Mugmate as a viable alternative. Might have to wait until my trip to the US in June to have a really good look at one as there don't seem to be any local suppliers.
Click to expand...

Never done it myself but since you can control the grind you could try something like a tea ball to make it with? Mine is only used to make tea in the house but i don't see why it wouldn't work for a coffee, cheap too.

Also a coffee snob, however, if I'm out, I also use coffee bags (Lyons). They can be stuffed into small gaps in the pockets, don't need any extra kit, and are surprisingly good 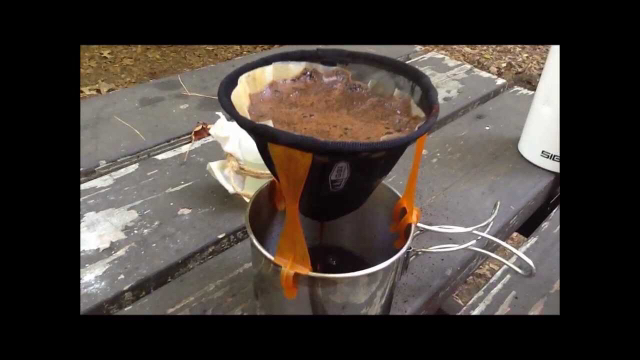 I use a GSI ultralight coffee drip , can be used with or without paper filter , works pretty fast , fits a multitude of cups and packs small and light, in fact I believe it fits into the concave space under a gas canister .... Works for me with whichever coffee grounds I fancy .

I use the lyons bags too as very convenient but also have a plastic coffee dripper that takes a paper filter, a hario v40. Very light and you can use your own coffee.

I've not used the Mugmate. I've looked, but never bought. It looks like a faff to use and clean (if water is limited), and it doesn't fit all mugs. I've got a simple press mug, but it's a pain to carry after use as the grounds get everywhere even if rinsed.

I've been very happy with the Aeropress. I have the rubber lid that seals the inside of the plunger so I fill that with coffee and filters. The used coffee comes out as a round puck that's easily disposed of.

And it makes great coffee.
P

The Mugmate is cheap and works perfectly simply. Just pour hot water over 2 scoops of grounds, wait a minute, and enjoy.
It works so well, I make all my coffee with it, unless the wifey wants to make a whole pot.
I don't know what could be simpler.
And btw, we're home-roasting coffee snobs, too

That's handy to know. I've had a root through the cupboard and found my mug, a Zyliss. Ooh, big pic, sorry.

I haven't gone the home roast route (yet), I like Taylors Hot Lava Java because it forgives mistakes and makes a good cup. And Monsoon Malabar is also excellent. Rather have a burr grinder than a whizzer, but hey ho.

The Zyliss mug doesn't get used much for camping unless we have plenty of water. This is also my potential problem with the Mugmate, the cleaning and storing in a pack.

Did a 3 nighter last weekend, the Aeropress gave me a good squirt of coffee and didn't need any rinsing.

Papa Tac said:
The Mugmate is cheap and works perfectly simply. Just pour hot water over 2 scoops of grounds, wait a minute, and enjoy.
It works so well, I make all my coffee with it, unless the wifey wants to make a whole pot.
I don't know what could be simpler.
And btw, we're home-roasting coffee snobs, too
Click to expand...

I have used various coffee filters, bags, presses etc in the past and have had fairly decent results with them, the problem with presses is it is another piece of equipment to carry or the coffee tends to get a little stewed if you use an all in one press and cup. The Ultralight coffee drip means I would have to go buy and carry some filter papers with me which really doesn't appeal. The mugmate on the other hand will hopefully either slip inside my cup or inside the Trangia, looks simple to use and looks every bit as effective as an press but without the press bit. Will try to get to see one in the flesh before I make the decision though, typical I went had to go past Go Outdoors today so called in and they had none in stock . Might have to have a visit to REI when in New York next month
Last edited: May 12, 2016

I got one of these I quite like. You can keep all your stuff inside the cup so doesn't take much room and gives you a big cup.

From an old review;

Bit of an impulse buy this one but it was a good price...

I like coffee when out canoeing, usually take along a some of the better quality instant stuff, Via and some other stuff I can't remember the name of. I do like the coffee ritual though and freshly brewed coffee just tastes better. I had looked at the javapress before but they were about 30 quid, you can probably get them for about 25 if you hunt hard but even still...

The US price is 30 bucks plus tax so about 20 quid but the shop I was in was doing a 20% off anniversary sale so for 15 quid I thought stuff it, worth a punt!

So in the box you get the plunger assembly in 3 bits, a pot for making the coffee and one for drinking it (with lid)

It nattily all fits inside itself, the plunger handle goes in the cup, the lid goes on the cup. The cup goes in the pot, the filter disk thing goes in and then the pot lid goes on top. Size wise, the mug is a generous size, bigger than your standard household mug but maybe a little less than a crusader mug. The pot is obviously bigger, not as tall as a beer can but taller than a coke can. Width wise it's maybe about 9cm or so, I don't have a ruler but that looks about right.

The plastic of the cup isn't the best, you get removable neoprene covers but I suspect it wouldn't stand up well to getting crushed. In saying that, when it's all packed together and in your pack it will be fairly crush resistant due to the cup inside the pot and all the tight fitting lids provding support.

Anyway, got the water boiling and assembled the press, the extra bit is the cup lid

Put in the admittedly pretty crap hotel coffee (was for a drip so is maybe a little finer than should be used) gave it a stir and let it sit for a couple of minutes before stirring again and then letting it sit for 2 minutes again. It came out ok the mesh did a good job of filtering out the finer than normal coffee.

The pot lid is pretty good, you can rotate it to seal the pot to keep the heat in and then rotate it again to pour, pours nicely too.

Managed to get a MugMate when in the States and have been using it for around 3 weeks now. It's fitted the bill pefectly although the first couple of uses was pure trial and error. I've found grinding the beans a little coarser than a normal cafettierre/French Press grind works better and the results have been excellent. The combined weight of the mugmate and my titanium mug is less than a quarter of the weight of the Lakeland press I'd been using. Quite pleased with my purchase and very pleased with the results, consistently good coffee, less weight to carry, win/win situation
P

Do you know if you put 1 to 2 teaspoons of coffee in a cup and leave it to brew for a timeand then tap the grinds that have set into a crust atop the cup, the grinds sink to the bottom, and when you have done drinking your coffee, you put on a john wayne voice and toss the dregs onto the fire, saying
P

big fan of the greek/turkish style coffee and pretty sure you could make it in a small billy or mug at a pinch.
I much prefer drinking hot chocolate/coacoa mocha when out and about though.
You must log in or register to reply here.
Share:
Facebook Twitter Reddit Pinterest Tumblr WhatsApp Email Link
Top Bottom