I was walking the dog around a reservoir, I know well. [my entire life] in a very nice broadleaf woodland.

Had my shades on, and thought at first that some kids or something had smashed a load of fancy dinner plates into small pieces on the path. They had that mother of pearl look.

Bit further on, I realised they were doing some work, had drained about a metre of the reservoir, and they were literally hundreds of smashed shells of freshwater clams, or molluscs, scattered around the edges of the path. Some had obvious beakholes in them, and the crows had been feeding on them.

Looked identical to this. Never seen them before. 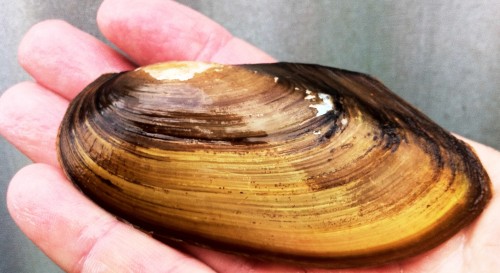 How do you prepare them,and are they tasty?

Do I have to put them in freshwater, and sprinkle oatmeal in the water, then leave for a couple of days? to filter out the crap?
Ive seen them do that with sea clams, then just put them on the embers of a fire to open?
Last edited: Nov 26, 2016

They are freshwater muscles, I would think they would cook up like normal muscles.

Yeh, thats what i thought same process as sea clams then?

It's been asked on the forum before

Basically the consensus is they're edible but don't risk it as you've got to be 100% sure about the water quality they live in.

Right I was beggining to wonder whether i should email the local council, and ask them to send a biologist check if they were protected? I mean they must have been at least ten years old. And it seems they are on the decline?
and there were literally hundreds of them.
What do you think?

Is it only freshwater pearl mussels which are protected?

Dave said:
Is it only freshwater pearl mussels which are protected?
Click to expand...

No, the depressed river mussel is protected as well, and no I didn't make up the name

They look almost identical to the swan mussel.

Years ago they were described as 'A famine Food' .........basically if needs must then they were eaten but it tended to be a necessity thing. One big problem is they are out and out filter feeders, they are very long lived (if allowed to be) and pollutants from quite a number of years ago 'can sometimes' be found in their flesh, it's not just a case of purging their stomach so to speak. Compared to some of my wife's culinary delights they would probably be ok but in truth that really isn't saying much.

Dave said:
They look almost identical to the swan mussel.
Click to expand...

That's why you have to be very sure about your identification

Yep. If they turn out to be depressed muscles, it would be a local tragedy!

. . . "famine food". . . .. sums up my western Canadian experiences. FW clams seem to be distributed
all across western Canada, both sides of the Rockies but which species we may have, no idea.
Always just as tough as an old boot (baked, fried, deep fried, steamed or BBQ grilled.)
Major disappointment as marine clams and oysters are delicate by comparison.

If you can ID ones not on your protected lists, the shells might make useful paleo oil lamps.
J

Do not eat them. As they are filter feeders they ingest large amounts of toxins and heavy metals which will be stored in the flesh. Even if the water quality is excellent now, it could have been polluted last year.

Ask yourself, would you drink the water they live in ?

In an emergency of course I would eat them, but only then.

Always worth getting your ID right... even the Daily Wail agrees on this:

Ok chaps, cheers for the advice. I'll try and nip down again, and take a few photos to show you.

Avoid filter feeders, especially river ones. Not only do they taste horrible muddy, I don't think they're too good for you. Their job is cleaning water, it's akin to eating soiled loo roll with a tiny bit of protein. Emergency only.

If you must, and I don't, eat clams and mussels from the sea where there's more movement of water.

I have a mate in the enviroment agency, I fish with. I might call him, and go down with him, and he can tell me if they are compressed clamd or swan clams. If the company who have drained the reservoir by two metres to carry out the work, have exposed the molluscs 'bed' and they are the compressed clams, they are a highly endangered species according to the web, so i guess the EA wont be too pleased at seeing hundreds of them on the pavement, eaten by the local wildlife.
You must log in or register to reply here.
Share:
Facebook Twitter Reddit Pinterest Tumblr WhatsApp Email Link
Top Bottom