https://flic.kr/p/2iTV39U https://flic.kr/p/2iTWCKm I've been given a rusted old axe head. There was a small bit of handle left but it was damaged by wood worm.
Soaking in vinegar currently and getting a wire wool.scrub every few days. Got some abrasive discs on the way for my grinder to help with the worst bits.
I have never done anything like this so bear with me!
I will take photos and weigh it etc next time I fish it out of its bath!

As the title says, I found it on the 3rd scrubbing that it is an Elwell No6. I know nothing about this brand so I need to do some research!
Last edited: Apr 24, 2020
Reactions: MrEd

Look into chelating (spelling?) - black molasses in water. A bit more sympathetic than vinegar and eats the rust well. Takes a while but leaves the detail rather than needing to grind.
Reactions: ProjeKtWEREWOLF

I have a couple of Elwells that I've restored (actually, I've only got one left, I must stop giving them away). As Mesquite says they made excellent axes at a time when British Steel was some of the world's best. Don't be in a rush to take an abrasive disc to it though, a few pits and scars are a bit of its history. As long as you've taken any rust off it and the cutting edge is clean and sharp doesn't matter if there is a bit of pitting left.

Elwell got amalgamated with such companies as Brades in 1967 to become Spearwell and then into Spear and Jackson a few years later. They started as Edward Elwell in 1799!
Reactions: MrEd and ProjeKtWEREWOLF

Tomorrow I will post my Elwell's do not use a Disk grinder of any sort on them wait, till you see my one's please. I have one from 1956.
Reactions: ProjeKtWEREWOLF

Here are 3 of my Elwell axes one from 1956 all still working. 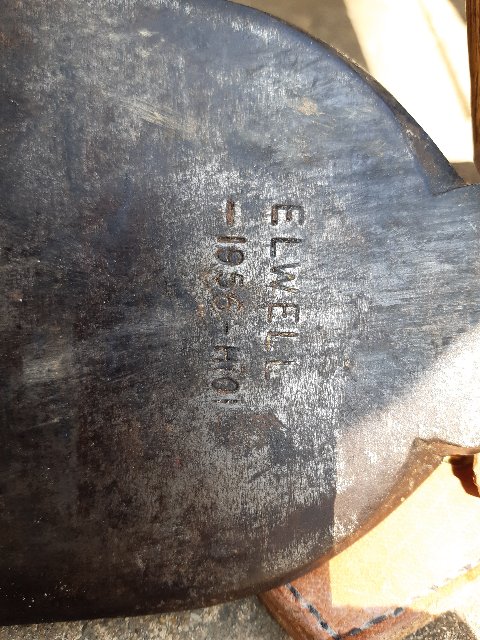 Dammit. I forgot to take before pictures. I took it out of the vinegar bath and took a wire brush to it. Looking a lot better.
How does one clean out rust in the eye?

ProjeKtWEREWOLF said:
Dammit. I forgot to take before pictures. I took it out of the vinegar bath and took a wire brush to it. Looking a lot better.
How does one clean out the eye?

I some times drill a large hole to start and bash about with a screwdriver to split bits of the inside of the hole or piece of wood and just knock it out, cut the handle off as close to the head a possible.
Reactions: ProjeKtWEREWOLF