This is a weird one - was out to shoot baby bunnies tonight and something had got a head start on me - abdomen and a lot of the rib cage intact, head intact, fore legs and upper torso removed. 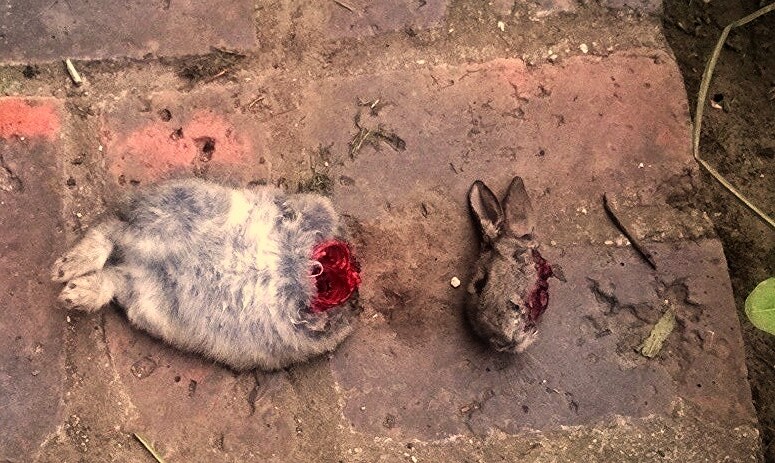 Blimey!
No idea but will be fascinated to find out.

It looks like a clean kill at the neck and then disturbed before eating much further; that's the style of a mustelid but it's a job to know, eh?

swotty said:
Blimey!
No idea but will be fascinated to find out.
Click to expand...

What he said! It's strange whatever did it, maybe it was a a fox that got disturbed during its feast?

Looks like the work of a weasel with a chainsaw!

Macaroon said:
It looks like a clean kill at the neck and then disturbed before eating much further; that's the style of a mustelid but it's a job to know, eh?
Click to expand...

Had it just been the head, sure, but the front legs and upper torso are gone ?

Weird that in it! No bite marks in the head at all?

What are your thoughts, Hugh?

What's the largest bore shotgun you've got Red? Was it a very close range shot and is the rest of thumper a slowly dispersing red mist near one of your vegetable patches?

Adze said:
What's the largest bore shotgun you've got Red? Was it a very close range shot and is the rest of thumper a slowly dispersing red mist near one of your vegetable patches?
Click to expand...

Yeah, feral cat would be a clean neck kill and they're neat and methodical eaters too, so that would make sense; I'm sorry to say that my knowledge of the hawks is zero, apart from the numerous Buzzard kill sites we get here

Strange one that. I can't think of anything that would kill something and eat just the front legs. Maybe it's one for Mulder and Scully.

I'd say cat, my old one wouldn't eat the heads either.

My first thought was a cat....

I'd say cat, we had one once that would leave the headless body of a rabbit on the back doorstep on a regular basis

I agree, it's very likely to be a cat Hugh, one of the mustelids would have most likely dragged the carcass away to its den. They all have young around this time of year. A cat is probably the only predator bold enough to eat it in situ. Looks like a young 'un, so an easy kill for a feral (or domestic) cat..
A bird of prey often pulls out the fur to get to the good bit, so you sometimes see fluff around the kill.
Last edited: Apr 30, 2014
J

feral/escapee ferret perhaps - the only thing that would remove the front legs and leave the rest behind is perhaps an animal that has been disturbed and scared off the carcase, cats will play (torture) live rabbit and sit over them chewing on their ears, badgers will eat rabbits perhaps it was disturbed while eating to account for abandoned carcase (i personally know of one case where a badger feasted on a dead deer), fox too would have taken carcase away unless disturbed and if a snare caught rabbit would leave just the head behind, perhaps a buzzard or crow scavenging on dead carcase. ---- PS are you by a river, otter?
Last edited: Apr 30, 2014
You must log in or register to reply here.