Change to the law on bird pest control

An interesting change to the law on shooting 'pest' species of birds. If anyone was considering shooting a bird for some reason then be aware it's currently illegal (at least in England) until licences have been re-issued. Good news in some ways and bad in others but in fairness the whole system has been a bit dodgy for a long time.

A farm in Nottinghamshire

It’s a nightmare, I can’t believe NE have done this with no warning, no consultation and just listened to the diatribe packham has been spouting.

Of all of the times to change the GL, when crops are at their most vulnerable, we lose up 40% of our crop to pigeon damage. What an absolute mess. We have 100’s of acres of peas in, they’d best get their act together quickly.

How irresponsible NE have been.

It's really about the way the existing/old law was not able to be policed. It was always necessary to consider and implement alternatives to killing before using the general license but, of course, people just paid lip service to that.

I do worry that any change that is rushed in will not be fully thought out for either side of the debate.
Reactions: Nomad64

As the article says a bad time to do it. The pigeons will have a field day.
It seems a bit short sighted that these dreamy armchair environmentalists "humane" methods of pest control are anything but. Say every farmer in the country uses bird scarers to drive off pigeons (and every other species of bird, some already endangered) from their crops where do these birds feed? They don't, they starve to death, or their chicks starve as they are unable to feed them. That, to me doesn't seem a particularly humane way of population control.
Reactions: petrochemicals and santaman2000

If you make a living through pest control, what a kick in the teeth, ill timed and very poor on NE, no consolations, interim measures in the short term.

Typical of these big departments, for you to drive a car you have to pass a test, to become a minister just be elected, one day mister of health the next environment minister for example, how can you get a grasp of what the true realities of these decisions they make.

You can partly blame the BBC for this for allowing Packham to use the programme to put forward his own ideas, lets not forget its the Licence Fee payers that pay his wages,and because of this he and the BBC should be impartial on these matters,
lets hope he loses his Court Case and ends up having to pay the Legal Fees himself.
Reactions: petrochemicals
J

As bird numbers have been declining the past decades, it will be interesting to see how much increased damage will happen.
Reactions: Mr Wolf

A farm in Nottinghamshire

Janne said:
As bird numbers have been declining the past decades, it will be interesting to see how much increased damage will happen.
Click to expand...

Pigeon numbers have gone up 4 fold in 10 years
Reactions: Samon, petrochemicals, Toddy and 1 other person
J

So once they change the rules, and issue the new permits, the farmers can feast on delicious Pigeon!

Is there any stats on loss of produce due to Pigeons?
M

I once found 73 peas in the crop of just one single wood pigeon. That should give some idea of what they can consume.
Reactions: Samon, Robson Valley and Toddy

And of course, farmers have all the time in the world to sit in the corner of a field shooting pigeons!
In my experience, farmers tend to work some of the longest hours I've ever known in any job
Reactions: petrochemicals, Toddy and santaman2000

Buckshot said:
And of course, farmers have all the time in the world to sit in the corner of a field shooting pigeons!
In my experience, farmers tend to work some of the longest hours I've ever known in any job
Click to expand...

Farming is the only job where you work 16 hours a day or more, 7 days a week in all kinds of weather trying to feed people who are convinced you’re trying to poison them and you lose money doing it.
Reactions: Samon, Lou and Janne

This might be totally the wrong thing to say but I think the country would do better to ban cats - sorry to all cat lovers but at least humans with a shotgun can discriminate between pests that need to be controlled and rare birds that need to be protected.

OK, let's be clear on a few things first:

1) Chris Packham is far from a "dreamy armchair environmentalists"; whether you agree with him or not he is a very experienced and knowledgeable naturalist. He understands the science and the politics of the situation.

2) All they have done is point out that farmers, gamekeepers and landowners have been breaking the law using the general license in the way they have so either the law must be changed, the killing stops, or the perpetrators are prosecuted - NE have decided to stop issuing licenses until it can be sorted.

There's always a third truth that will fall between these two extremes. We would probably all agree that pest levels of wildlife need to be controlled (even vegetarians will have to concede that it will protect the supply of vegetables) but if there is no policing or control on who does the killing, how the killing is done, and to what level (as is/was the current/yesterday's position) wildlife doesn't stand a chance. To put it into perspective (and I joke not) the farmers around here couldn't tell you the difference between a raven a crow and a rook - should they be doing the killing?
Reactions: Samon, KenThis, MinTheLab and 4 others
C

Is it only Shooting that's been banned?

is another option
Reactions: Samon

Lou said:
This might be totally the wrong thing to say but I think the country would do better to ban cats - sorry to all cat lovers but at least humans with a shotgun can discriminate between pests that need to be controlled and rare birds that need to be protected.

Banning would probably be extreme (even it were realistically possible) Heavy fines for people who let their cats wander loose might be realistic.

We have an almost unbelievable problem here with feral cats. Is that common there as well?

Corso said:
Is it only Shooting that's been banned?

That worked very well for us at RAF Fairford. They’d loose the hawk about 15 to 20 minutes before we launched aircraft to clear the field and prevent bird strikes during launch operations. However the birds returned within a half hour after the hawk left. That wasn’t an issue at the airfield because launch and recovery operations were relatively predictable. I doubt the hawks and their keepers can stay at a given farm all day to prevent pigeons returning.
J

So part of the solution might be to breed more Birds of Prey and release them?

But the gamekeepers keep shooting them
That's a joke by the way; I am aware that most gamekeepers abide by the law and it is only a minority that shoot our protected birds of prey.

Mind that bit about being an 'urbanised' society ?
Well I have neighbours who are shocked and horrified that the sparrowhawk takes the pigeons from the bird feeders, let alone that folks shoot them. 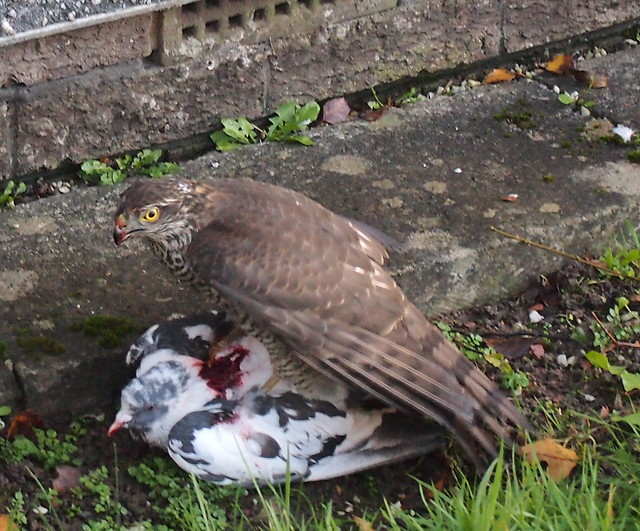 next door's garden......one of many the hawk's had in the last couple of years, it's surprising how many feathers there are on a pigeon, you'd think someone had burst a pillow.

It's not popular with many, and it's even less popular among the folks who breed for the commercial and private shoots.

Farmers taking out pigeons and rooks (and yes we have rookeries here, with literally thousands of birds in them, they darken the sky in the evening as they swirl around before they head to their roosts) and hoodies aren't doing it right in front of most folks .....like the ones who'll back CP to the hilt.

Personally I'm all for someone with a decent air rifle who quietly goes about the business of culling the numbers of the pigeons, magpies, and hoodies.
If they'll do rats as well, then job well done.
Reactions: santaman2000 and Lou
You must log in or register to reply here.
Share:
Facebook Twitter Reddit Pinterest Tumblr WhatsApp Email Link
Top Bottom