Sold Alan Wood One Off Bushcrafter

For sale is my Alan Wood "One Off Bushcrafter".

That's right this is a one off by Alan.

All the details are on its birth card in the images.

I picked this up a couple of weeks ago over on another forum. It was bought in as new condition although it is now being sold in used condition. It needed a sharpen before I went on to lightly use it. It is now nice and sharp.

It came with a patina finish by Alan which I removed.

It still has some of the grind marks that Alan leaves on the scandi bevel when he finishes/sells a knife. He finishes the scandi bevel slightly concaved from the belt grinder. I have given it its first sharpening so some of Alan's grind marks have been removed and the rest will be removed on the second or third sharpening like on many scandi grind knives.

I'm only selling this as I have been hit with an unexpected bill. 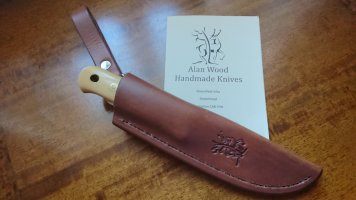 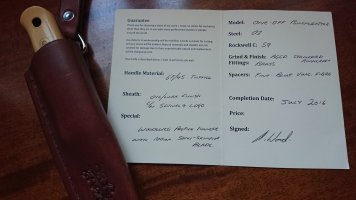 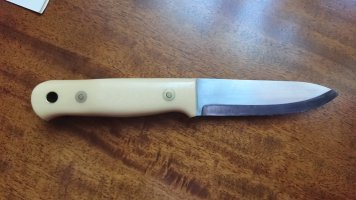 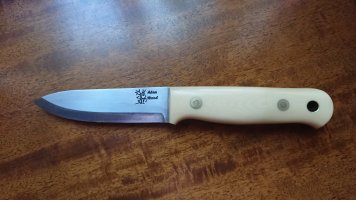 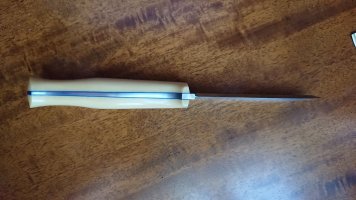 Would you take PayPal for this knife
Reactions: Spirit fish

ocean1975 said:
Would you take PayPal for this knife
Click to expand...

@ocean1975 As you have only asked a question and not firmly stated an intent to buy, although the question may be taken to imply that, I will give you the benefit of the doubt and ask you to confirm next time you are on the forum if you wish to buy as another member has expressed a firm interest to buy.
Reactions: Spirit fish

Hi
Would like to put my hat in the ring if the ocean 1975 doesn't get back to you.

I also am interested,I have offer being considered on another knife if it falls thru please bare me in mind,regards Tony.

OK, I have been out all afternoon and just returned to a signal. I have sent ocean a number of messages this afternoon but he has not confirmed a firm wish to buy, only the query regarding payment on this post has been made by him.

I am going to move this sale to the first member who has contacted me with a firm wish to proceed. I think I have waited a reasonable period for an answer.

Anyone disagree?
Reactions: Ratbag and plastic-ninja

This is now Sold Pending Funds. If I haven't contacted you directly, then I thank you for the interest.

Damn that will teach me not to check emails......
Good sale..
You must log in or register to reply here.